'Fairy Tails' exhibit shows the fantastical, the grotesque, and the richness of story 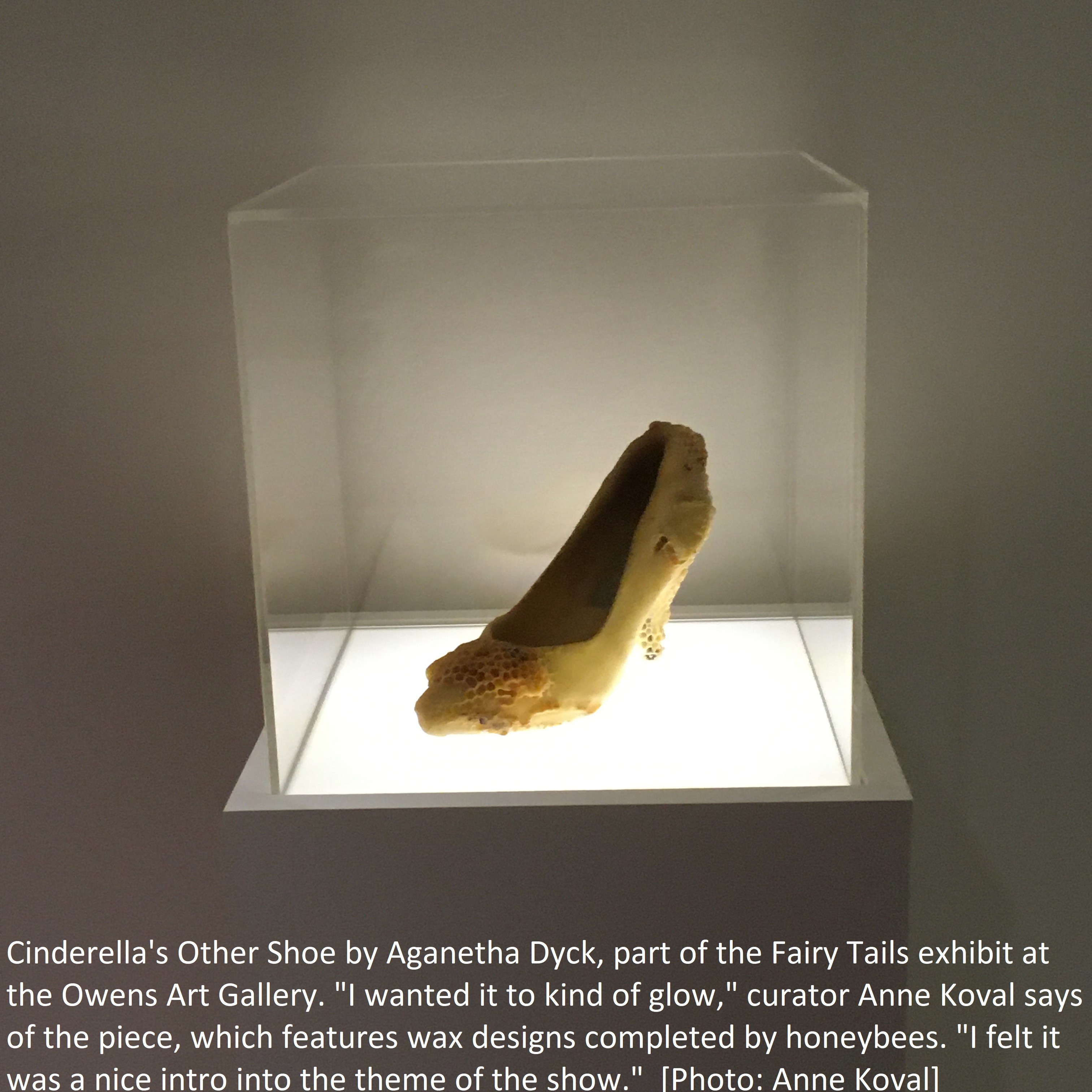 Fairy tales are good for us, says Anne Koval, a professor of Art History. A new exhibit in the Owens Art Gallery, with a complementary book display in the library, explores the animal side of the tales that have both captivated and creeped us out for centuries.

"I grew up loving fairy tales when I was a kid. I graduated from fairy tales to Angela Carter’s fairy tales as an adult. I think we all need that element of magic and disbelief and getting through long winters," says Koval, curator of the exhibit. "Fairy tales are actually really good for us. We need them."

"Fairy Tails," on display at the Owens until April, is a feast of images, textures and textiles, many with a dream-like quality. In Janice Wright Cheney's "The Lucivee in Captivity," a life-sized black cougar with thick, velvety fur lounges on a leaf-covered tapestry featuring a digital print of an old-growth Acadian forest. In "Curiosities" by Vicky Sabourin, people can open a three-drawer chest that contains surprising treasures, including a book created by prolific 19th century children's  illustrator Walter Crane; a lifelike eyeball; and several mice that are both creepy and cute. And in Anna Torma's spectacular embroidered and appliqued tapestries, fanciful beasts and monsters surround innocent-looking humans, while snakes or dragons of varied design and fierceness appear ready to devour all. 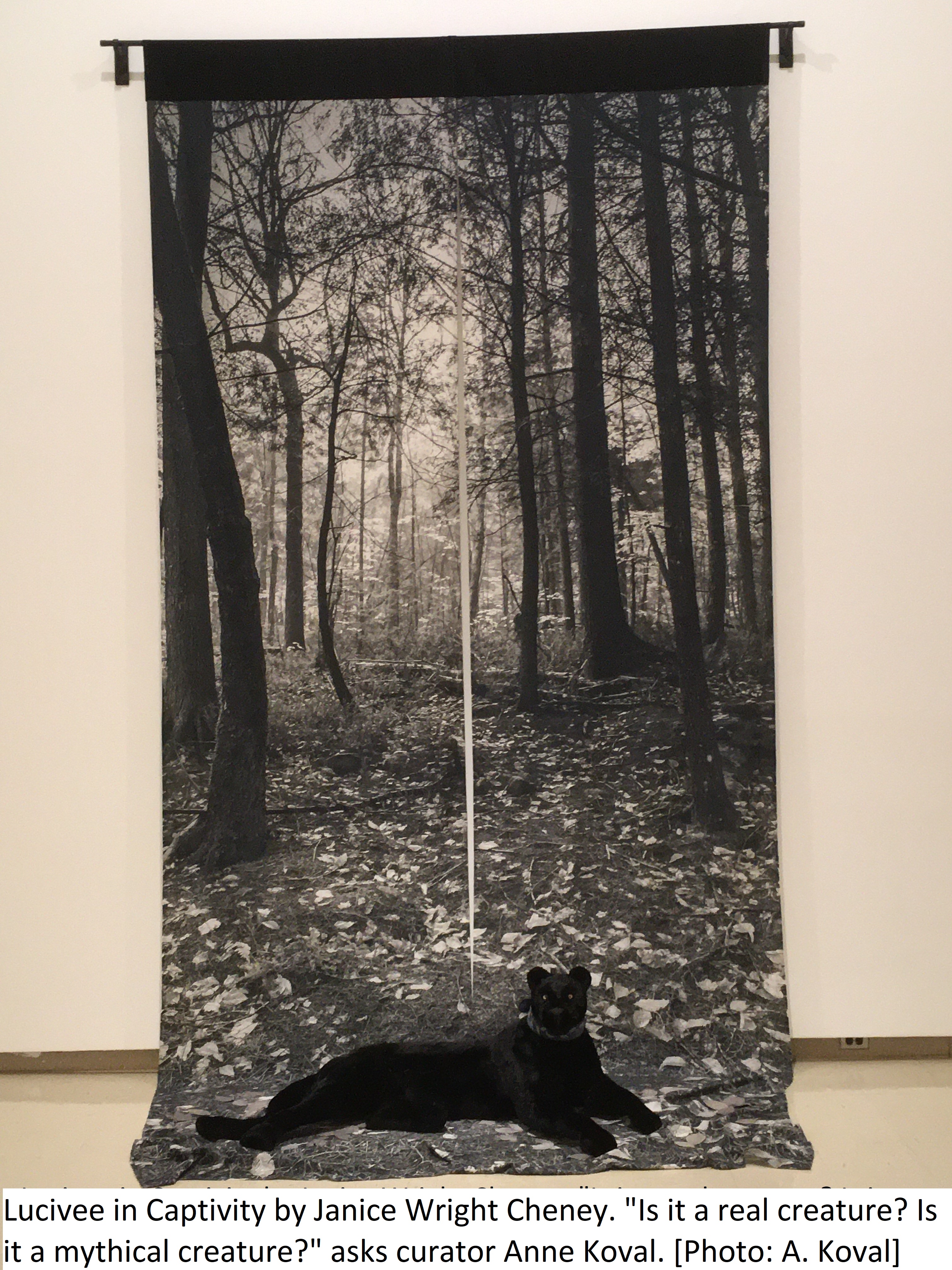 "Animals are really interesting because they can talk to humans in fairy tales," Koval says of the animal theme running through the exhibit. The Lucivee, for example, is a mythical black cougar in Acadian history and folklore, often sighted and blurrily photographed in the 19th century, she explains. "Is it a real creature? Is it a mythical creature, like the Unicorn in Captivity?" Koval notes that Wright Cheney's art piece resembles a 16th Century unicorn tapestry on display at the Met, but with a New Brunswick twist, right down to the type of trees pictured and the native plant embroidered on the mythical animal's collar (rose twisted-stalk, streptopus lanceolatus).

The exhibition was roughly five years in the making, as Koval brought together nine artists working in a variety of media. While pulling the themes together, she consulted the library's extensive collection of fairy tales and fairy-tale interpretation.

“I was doing all this research in the Mary Mellish collection, which I love. It's kind of a hidden secret on the third floor," she says. "I 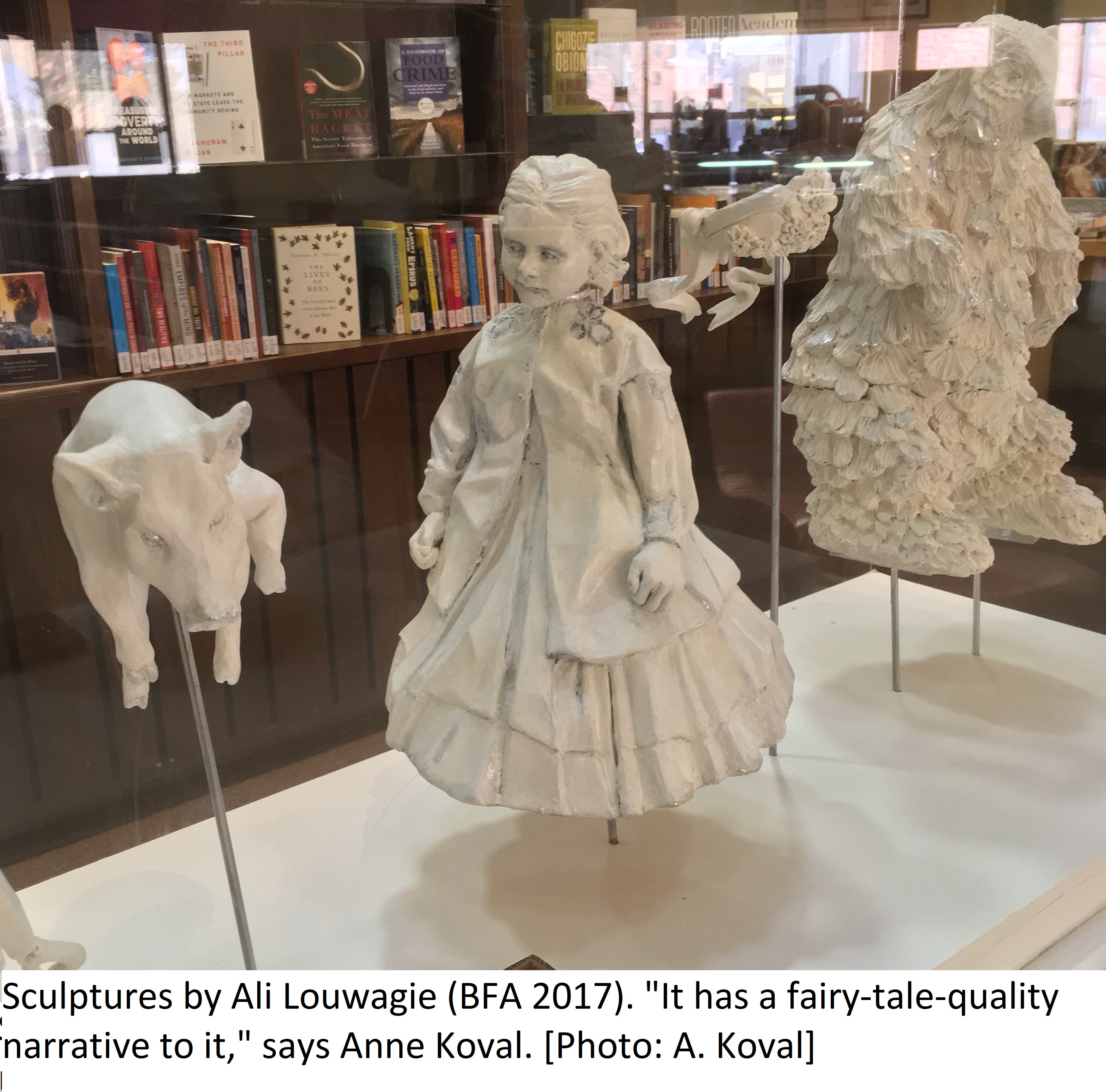 wanted to pay homage to that." A complementary display in the library does just that, bringing together rich texts from the Mary Mellish collection and Koval's personal collection, along with fanciful sculptures by Mount Allison Fine Arts graduate Ali Louwagie. The front of Louwagie's display case features the call numbers of books in the R.P. Bell Library and its Mellish collection, which she used to research her art.

The library's Mary Mellish folklore collection contains an extensive assortment of fairy tales, as well as books and journals relating to other aspects of folk life, including music. The library's "Fairy Tails" book display contains contemporary and classic works from the collection. Ladies' College librarian Raymond Clare Archibald started the Mary Mellish collection in 1905 in honour of his mother, a former Ladies’ College Vice-Principal who died in 1901.

Today, the Mary Mellish collection holds over 12,000 volumes, with extensive back runs of journal titles. 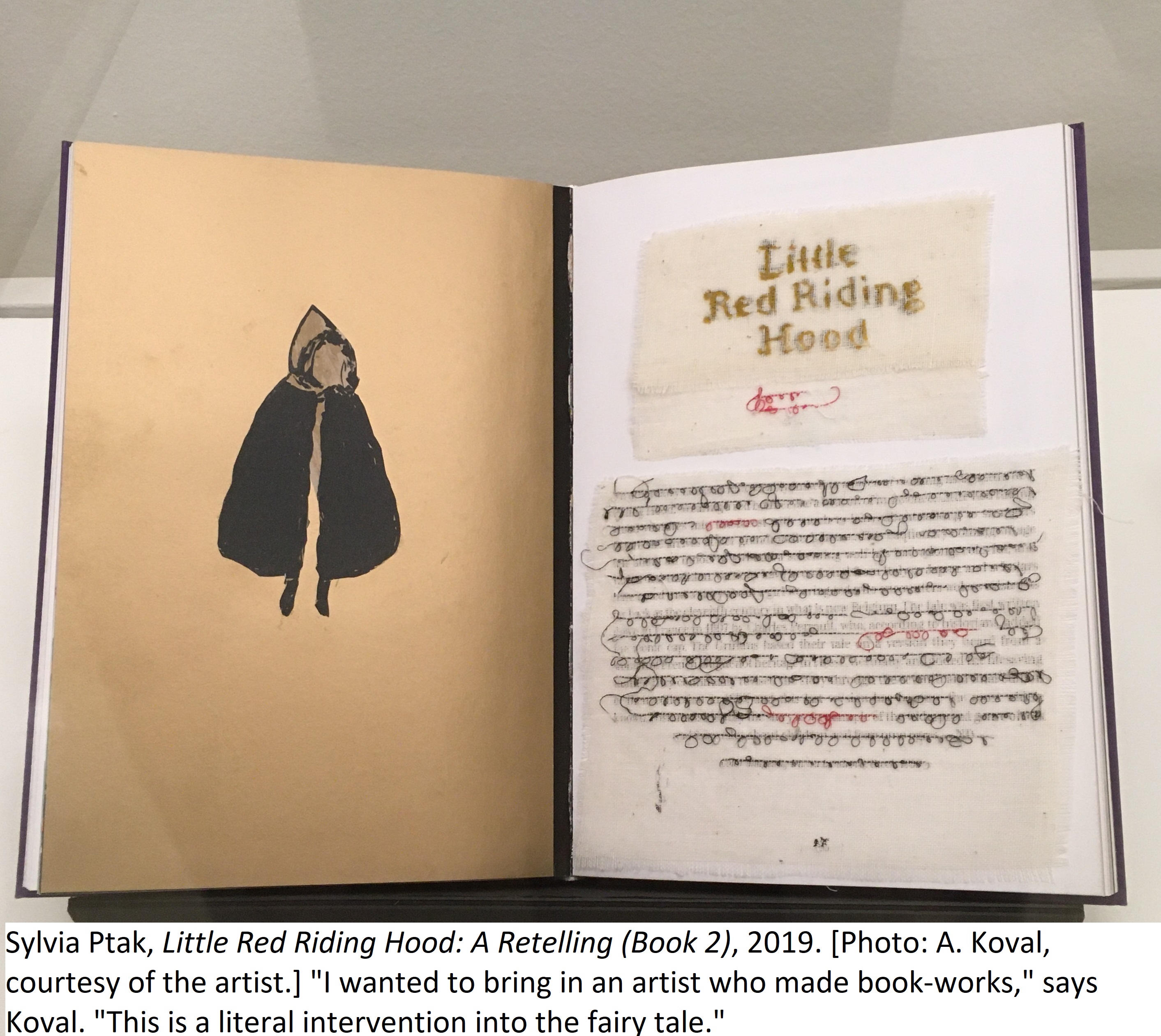 "I love reading about how to interpret fairy tales," says Koval, who notes fairy tales cross cultures and ages. "Everything [in the Fairy Tales exhibit at the Owens] is accessible in terms of its content."

One star piece in the show, for example, is a captivating 25-minute film called Requiem for Wind and Water. The film, by Amalie Atkins, features braid-wearing twins in red jumpers and a statuesque witch with Medusa-like braids and a giant cloak. In one scene, the twins crouch inside a patchwork tent and sift earth through an old-fashioned enamel flour-sifter into a mixing bowl. They create a feast of fabulous mud-based cakes, jellies and breads for the witch, and lay it out on an elegant table in a bleak, snowy field. What happens next is fairy-tale perfection.

"It's a great film," laughs Koval. "The twins are almost weirder than the witch."

The Fairy Tails exhibit is on display in the Owens Art Gallery until April 1. The library's complementary display will be up for the month of February. 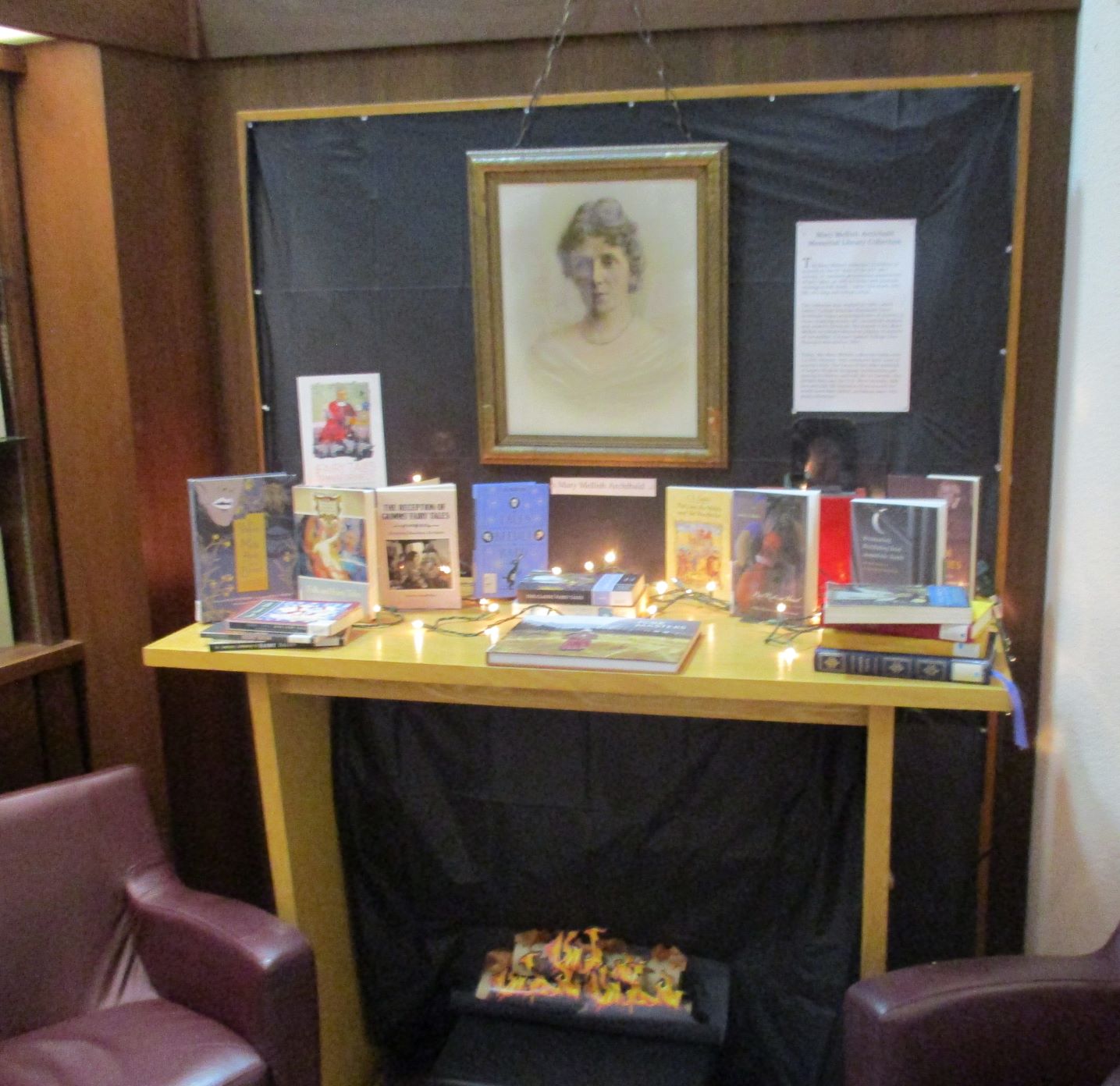 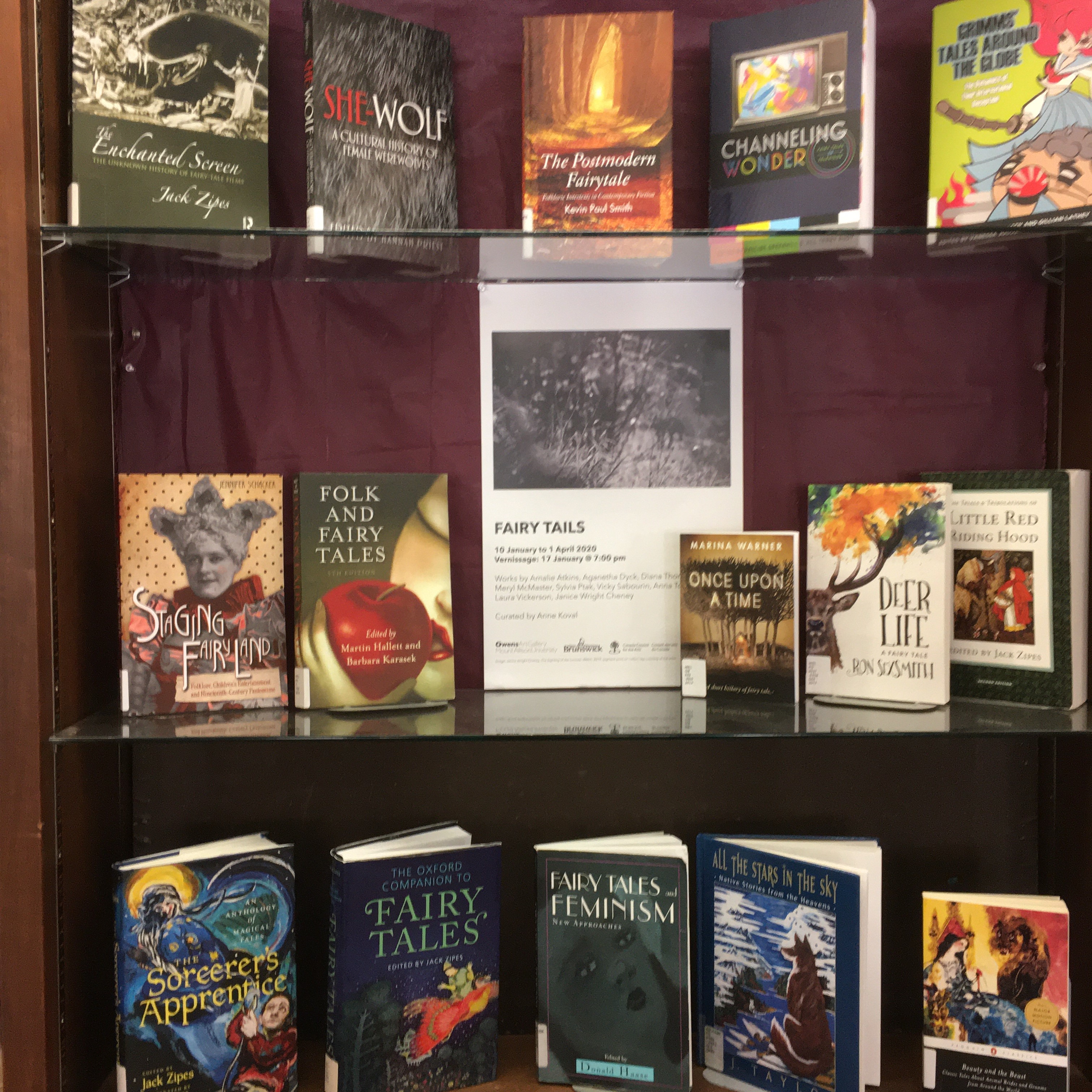 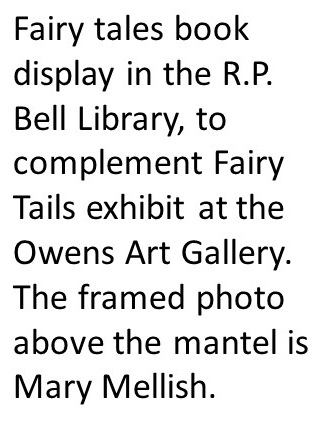