Renée Belliveau was poring over old photos in the Mount Allison Archives when the story of Mount Allison’s greatest tragedy began to capture her imagination.

The other way, says Belliveau, was reading Mount Allison President George Trueman’s diary accounts of the men’s residence fire of December 16, 1941, which gutted the residence, killed four students, and left others injured and traumatized. “It was just heartbreaking,” she said.

Belliveau, an archivist and Mount Allison graduate, turned that heartbreak and trauma into a novel chronicling the events leading up to and immediately following the fire. The Sound of Fire, published by Vagrant Press and released in October, will be launched November 4 at 7:30 p.m. at an online event open to all.  (Note: people can e-mail alumni@mta.ca for the Zoom link to attend.)

The Sound of Fire begins on the day of the fire and ends two months later. It tells the story of the fire through the fast-paced accounts of several characters, including students, staff, faculty, and community members such as a nurse, an optometrist, and a local Tribune-Post journalist.

“My intention was to explore how many people were impacted by this fire and how they all experienced this event differently. I think I was informed by how I learned about the fire,” says Belliveau, who pieced together a variety of accounts, both objective and personal. “The records themselves really informed how I wanted to write this.” 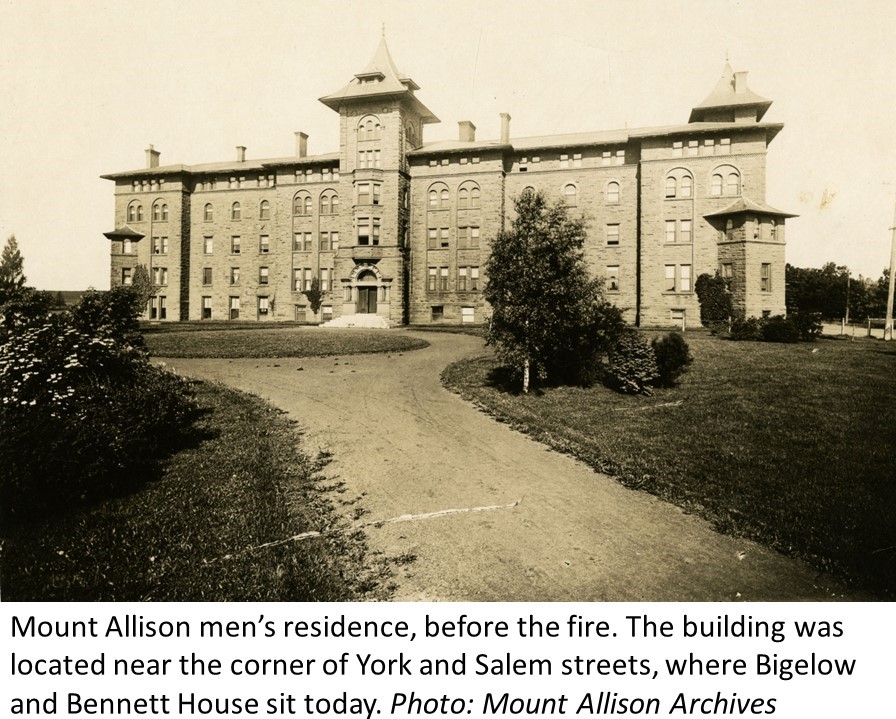 Those records are primarily in the Mount Allison Archives, and in print and microfilm newspapers on file in the Mount A Library. They include oral history interviews, a vast collection of photos from before, during and after the fire, diary accounts, letters from students, and telegrams from frantically worried parents seeking information about their children’s safety. They even include a report from a biology professor who examined the bodies recovered from the fire.

Yet this rich set of records also revealed inconsistencies. Belliveau says she discovered multiple and differing accounts of who actually discovered the fire and pulled the alarm, for example, and she noticed personal accounts that obviously conflated things.

“I think we create the truth collectively, and the stories that people tell can be just as valid as the records sometimes. There are omissions and gaps in the records. We need to take everything in and make our own conclusions,” she says.

This need to fill in gaps is in part what compelled Belliveau to tell this real-life story through fiction.

“My background is in literature and my goal has always been to write fiction,” says Belliveau, who holds master’s degrees in both English Literature and Information Management, with a focus on archives.  She is currently serving as Acting University Archivist at Mount A. “It was a no-brainer to me. I think it would have been a much shorter book had it been a non-fiction book. We do have many records, but I still had to imagine a lot of what happened.”

Many of the characters are based on real-life people. Those steeped in Mount Allison’s history might recognize Alex and Rhoda Colville, for example, or Professor William Morley Tweedie. But others are inventions, to more effectively tell the tale.

“I wrote the first draft with everyone’s real names, and then I really had to sit with that and decide if I wanted to essentially talk for them,” she said, explaining that in the end, she opted for fictionalized characters, which also gave her the creative latitude to have the fire itself narrate part of the story. “My decision stemmed from wanting to be respectful but also not wanting to have real people mixed in with invented people.”

Belliveau wrote the book amid the pandemic, which brought difficulties such as not being able to travel to archives to re-visit certain documents or dig further, although she had been doing research about the Mount Allison fire since 2018. Interesting information continues to surface, such as the story of one student who was injured in the fire and went on to do graduate studies in Toronto, only to walk into a police station one day with “complete amnesia. He didn’t remember anything except that there was a fire out east,” said Belliveau, noting the fire deeply affected all who lived through it. 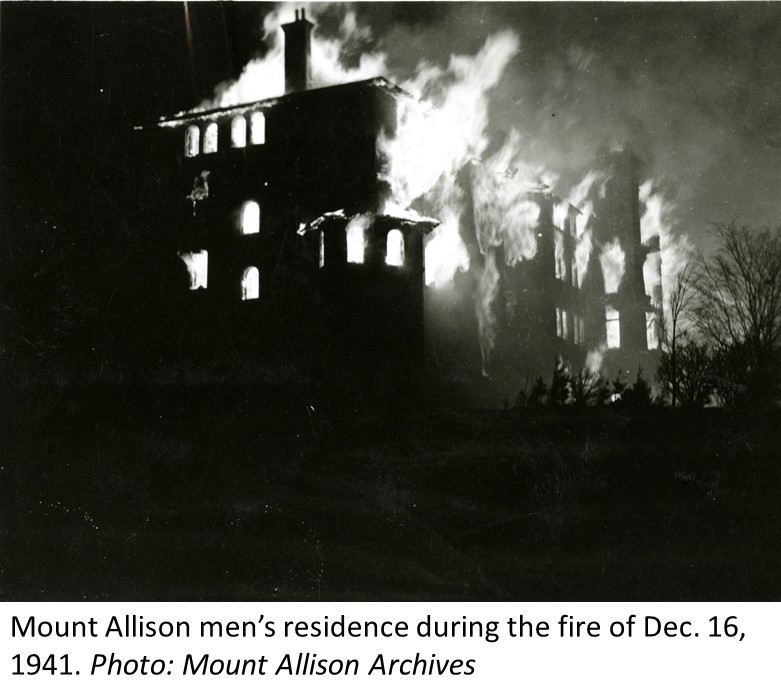 “My knowledge of the fire continues to change. It’s constantly evolving and I still have questions that I am not sure surviving records could answer. There’s always more to be found.”

And while she did not set out to find “the truth” about the fire, personal interest and an archivist’s itch may compel her to visit the Provincial Archives for further investigation.

“It was deemed accidental, but a lot of people didn't believe that verdict,” she said. “I'm not convinced it was accidental, but I don’t have the answer to that question.”

She said she hopes The Sound of Fire sparks an interest in both history and archival research.

“I think it’s fair to say most people on campus today don’t know about this tragic night, or the kind of research and information that you can find in the archives. It doesn’t all have to be academic – you can use these records for a more creative purpose,” says Belliveau. “Everyone is welcome in the archives and in the library.” 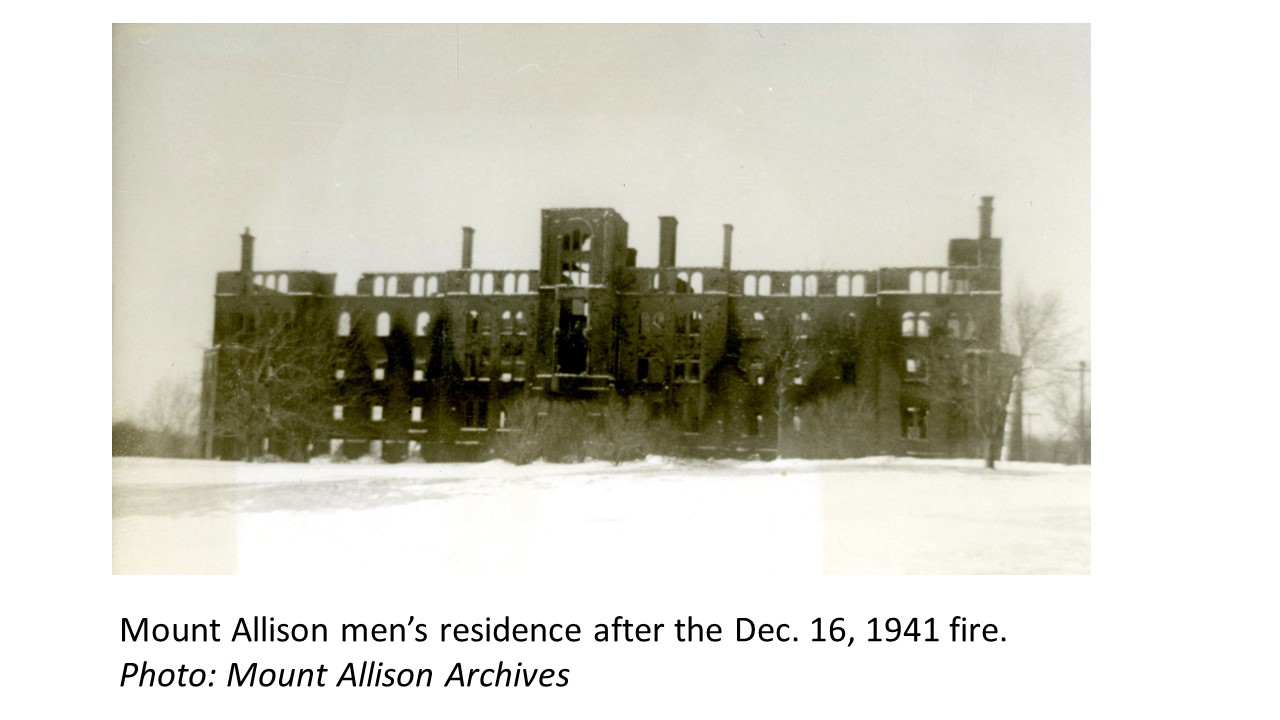 To attend the online book launch for The Sound of Fire on Nov. 4 at 7:30 p.m. ADT, visit https://soundoffire.eventbrite.ca  or email alumni@mta.ca for the Zoom link.