Join us in celebrating the achievements of Black Allisonians

Every February, people across Canada participate in Black History Month events and festivities that honour the legacy of Black Canadians and their communities. The Mount Allison University Libraries & Archives invite you to learn more about the achievements of two accomplished Allisonians. 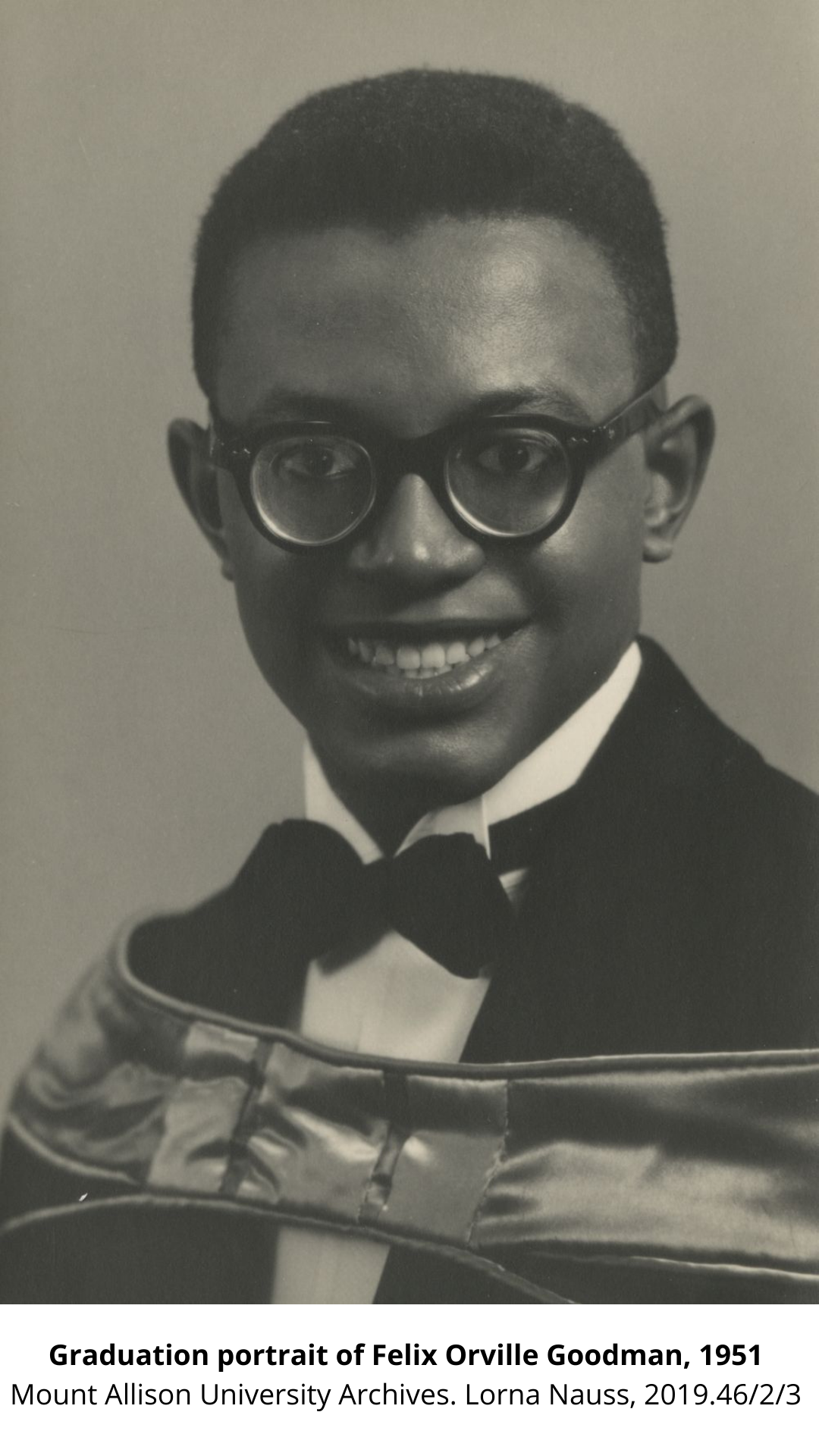 Felix Orville Goodman (or “Orrie,” as he was known to his friends) was born in Brooklyn, New York on 28 August 1927. He was the son of Filipe Goodman and Violet [Ifill?] Orellano (1907-1969), an American citizen originally from Barbados. He was educated in public schools near his home at 536 Hancock Street in Brooklyn, New York and graduated from the Boy's High School there in June of 1946. Thereafter he came to Sackville, New Brunswick and initially studied business administration in the Commercial College. It is believed that he came to Mount Allison on the suggestion of his mother who was friends with the mother of students Milton and Danny Gray, some of the earliest Black students to attend Mount Allison.

While in attendance, Orville Goodman was involved with the Music Conservatory, was a member of the gymnastics team and served as the Secretary-Treasurer of the Studio Club. In 1951, he earned his Bachelor of Fine Arts degree, the first Black student to earn this degree.

He was musically gifted and often performed in theatrical productions in the area around his home. For example, he worked with James Earl Jones in a production of 'Our Town' by Thornton Wilder. He was a member of Holy Trinity Episcopal Church in Pawling, New York. He was married twice. He married his second wife Clara Elsie Nordlow (1933-2010) in 1985. He died at his home in Wingdale, New York on 12 December 2000. 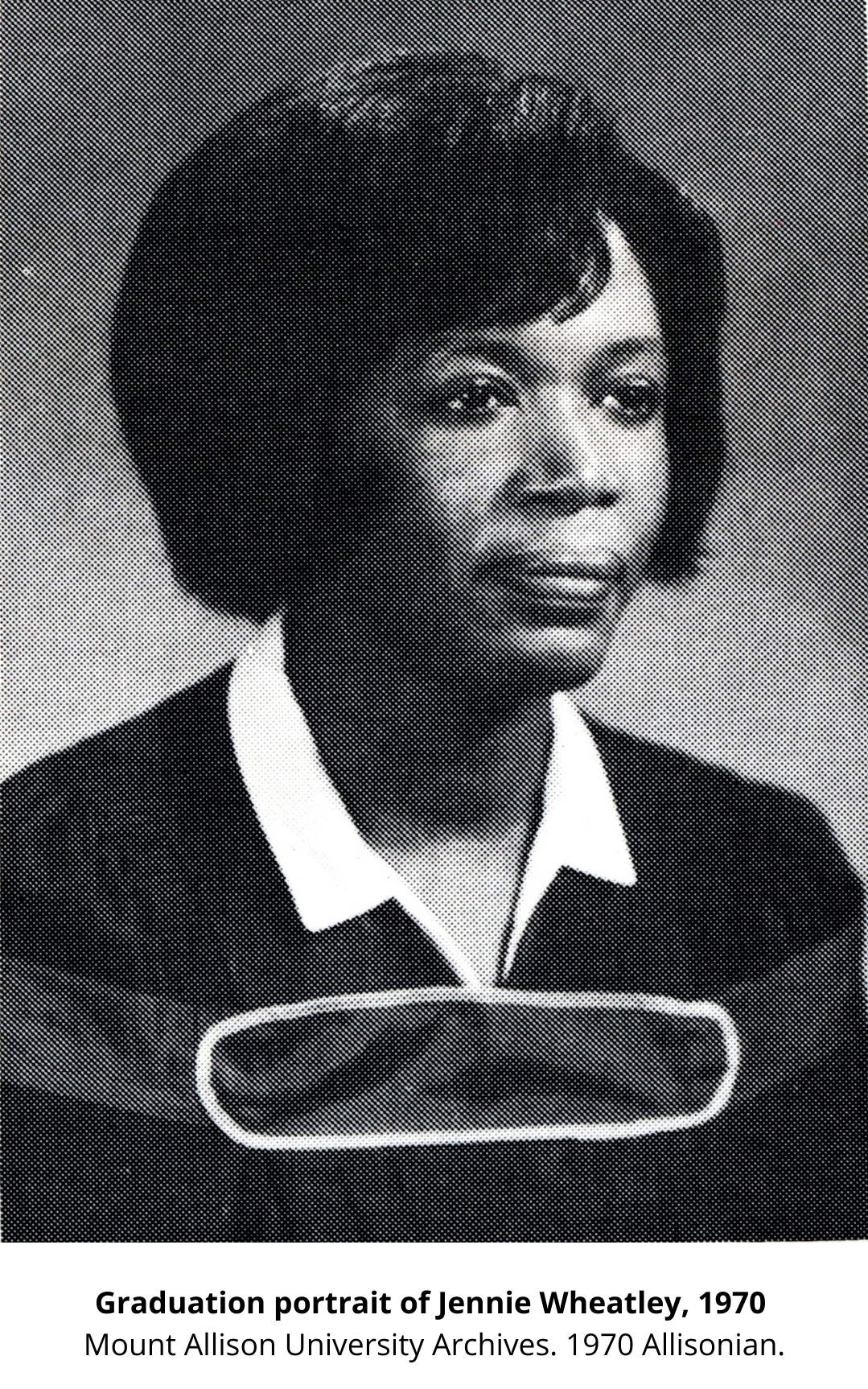 Jennie Naomi Wheatley (née Smith) was born on 24 June 1939 in Tortola, Virgin Islands, where she received her early education. In 1960, she graduated from the Leeward Islands Teachers Training College in Antigua. After obtaining a B.A. (Honors English) and a B.Ed. from Mount Allison University in 1970, Wheatley pursued further training in education at England's University of Leeds in 1981.

For over forty years, Wheatley has taught primary and secondary schools throughout the Virgin Islands. The educator has served on the English Panel of the Caribbean Examinations Council and was a "marker" for several years.

Since its inception in 1990, Wheatley has served on the Board of Governors and as an adjunct lecturer at H. Lavity Stoutt Community College, of which her husband, Dr. Charles H. Wheatley (B.A. and B.Ed. 1970) was President. In 1993, Jennie Wheatley was awarded the Most Excellent Order of the British Empire (M.B.E.) by Queen Elizabeth II for outstanding contribution to education and culture in the British Virgin Islands.

Wheatley has co-authored Comprehension for Caribbean Examinations (Macmillan, 1979); and authored Boysie and The Genips and Other Stories (UNESCO, 1984), and the first edition of Pass It On !!! A Treasury of Virgin Island Tales (WSTD Publishing, 1991).

In her preface to Pass It On, Wheatley notes that the collection “consists of incidents that took place during my own early years and stories that were handed down to me via the oral tradition.” They follow a young boy from the Virgin Islands as he goes through the stages of boyhood to early adolescence, often getting into mischief.

With these stories, Wheatley aimed to provide her young students “with stories with a local flavour” and to prove that “in these Virgin Islands, there are subjects to write about.”

In 1996 Wheatley was the assistant principal for academic affairs at B.V.I. High School and still found time to direct an oral history project "which seeks to record events and activities of the past as seen through the eyes of senior citizens." The culmination of that project came in 2013 when she published the book Struggles and Triumphs, which aimed to illustrate the struggles, poverty, successes and goals of the Virgin Islanders. She also published four children’s books: Timmy Turtle Runs Away (2005), Danielle's Trunk (2005), Arianna Likes to Read (2005), and Who Is the Best in the Garden? (2006), as well as a collection of poetry entitled Along the Road (2009).

You can learn more about Goodman and Wheatley by visiting the exhibition in the entrance of the R.P. Bell Library or by contacting the Mount Allison University Archives at archives@mta.ca.

Disharmonies: An Evening of Poetry & Discussion in the Library
What I Wish I Knew: Library Edition
We Are Hiring!
Celebrate Pride all year - with data!
Novanet news: New system launch