The Edgar and Dorothy Davidson Collection of Canadiana 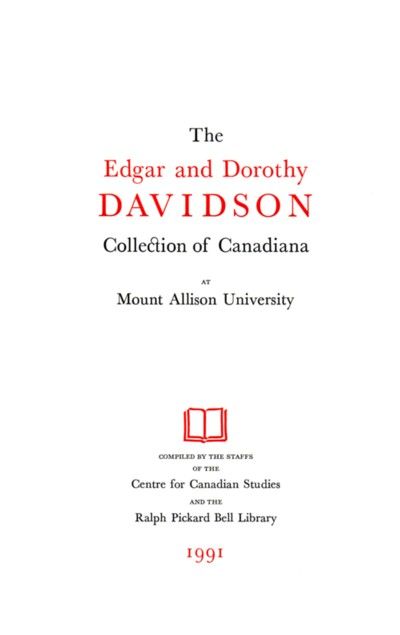 The Edgar and Dorothy Davidson Collection of Canadiana is a treasure of nearly six hundred rare first-edition books and early imprints spanning the seventeenth to the nineteenth centuries.  The Davidsons had a keen interest in the early history of Canada, and donated their private collection to Mount Allison in 1969 when they established the Edgar and Dorothy Davidson Chair in Canadian Studies.

The Collection covers five main subject areas: French and French influence; English and English influence; Arctic exploration; the Western Frontier; and early Canadian imprints.  Works by Lescarbot, Champlain, Vancouver, Franklin and Palliser are a few of the vivid accounts of Canadian exploration and settlement.  There are personal testimonies of battles, ethnographies of Native peoples, early histories of the country, scientific and religious treaties, and fascinating examples of government boosterism and propaganda.

Edgar Davidson was born in Germany, and came to Canada as a young man in the 1920s.  Educated at Macdonald College and Queen’s University, Dr. Davidson was a distinguished student.  Once he began his teaching career, he served the school system as teacher, vice-principal, principal, and co-ordinator of educational development plans for the Protestant School Board of Greater Montreal.  In recognition of his exceptional contributions to his profession, Dr. Davidson was made an honorary life member of the Provincial Association of Protestant Teachers, and was awarded the Scholastic Order of Merit for Great Distinction by the Government of Quebec.  For his wartime service in the Intelligence Branch of the Canadian Navy he was awarded a membership in the Order of the British Empire.  Dr. Davidson received an honorary degree from Mount Allison in 1969.

The catalogue for the Collection is available in print format in the reference collection of the main library at Z1365. R34 1991 and online. Materials may be used within the library with permission of the University Librarian.

Image is the title page of the catalogue of The Edgar and Dorothy Davidson Collection of Canadiana.

This project was made possible by the kind support of the Harold Crabtree Foundation.

*A copy of the complete bibliography is available upon request for the cost of postage.