Pages through the Ages: A History of Mount Allison's Libraries & Archives: Early Libraries 1843-1927

Mount Allison has had a library since its establishment as the Mount Allison Wesleyan Academy in 1843. By 1851 the library had 3,000 volumes. A succession of faculty members was assigned to serve as the librarian in addition to their teaching duties. This practice continued for almost a century, until the first professional librarian was hired in the 1940s.

Provision of books in the early years relied on a number of sources. Beginning with the opening of Mount Allison Wesleyan College in 1863, all students were expected to pay a small fee that contributed to library purchases. Faculty also played a role: they studied bookstore catalogues, donated money to support purchases, gave their time to prepare catalogues and indexes, and encouraged interested individuals to donate volumes or funds to improve the collection. The Alumni and Alumnae Societies made careful selections. There were many gifts from Methodist ministers, and former students gave personal gifts. At this time the collection focused on theological works and scripture commentaries, and the classics of history, biography and literature.

During the early years, the library was housed in a succession of buildings. Initially it was in the Academy building. After the establishment of the Mount Allison Wesleyan College (1863), it was housed in Lingley Hall. In 1878, the collection was divided between the three Mount Allison institutions. The college library was moved to College Hall, while the Male Academy and the Ladies' College each renovated rooms in their buildings to accommodate a library. In 1884 the College library collection moved into the newly constructed Centennial Hall, while smaller libraries remained in the Ladies’ College and the Academy.

As the student population grew, so too did the holdings and the Centennial Hall space soon became inadequate. By 1919 it had become obvious that a building dedicated solely to the library and infant archives was necessary. [1]

In 1926 The Record reported: “We have at the present time some twenty-five thousand books in the different libraries, scattered in many rooms, large numbers of them not available for use, many of them packed in boxes and very few of them so catalogued as to be fully available.” [2]  Books were packed in double rows on shelves, making them difficult to find or consult, and others were stored in various rooms, including the garret. New shelves had been added but they jutted into the room, further limiting table-space in Centennial Hall. [3]  Citing lack of space, improper storage facilities, and a lack of centrality, The Mount Allison Record published a series of articles describing the need for a new building, and asking alumni to contribute to the Memorial Library Campaign. Fund raising had its setbacks but despite these the new Memorial Library opened in 1927

Ladies’ College students, along with students from the Male Academy and the College, used the Lingley Hall library until 1878.  In that year the Mount Allison Board of Governors, the Alumni Society and the Eurhetorian Society each voted sums of money to purchase books, and a decision was made to divide the 3,000 volumes in Lingley among the three institutions.  The Ladies’ College was given 1,000 volumes allowing it to establish its first independent library.

In 1881, the Alumnae Society began giving money annually for the purchase of books and this continued until 1886 when other priorities prevented it from continuing. In 1896, Vice-Principal Mary Mellish Archibald urged the Society to once again place an emphasis on book purchases and several fund raisers were held. By 1902, there were 500 volumes in the Alumnae Society collection, about 300 of which were valuable modern books of use in the school’s work. However, there was a large loss of books through damage and theft, and it was decided that a change was necessary to protect the collection. In addition, Mount Allison alumnus and Ladies' College Librarian, Raymond Clare Archibald, began to develop the Mary Mellish Archibald Memorial Library (MMAML) in 1901, further straining the allotted space.

In autumn of 1902, two large, bright rooms in the Ladies' College were assigned to the library – one to the book and magazine collections and the second to store less important volumes. The original small room was used for newspapers. Principle reference books were accessible to all students on open shelves and a reference desk; other volumes were placed in locked cases with glass doors and these were charged out by the librarian as required.  In addition, a large number of magazines were bought, a 16 drawer card catalogue cabinet was purchased, and all the books were catalogued in detail.  With numerous donations and purchases, within a year the new library rooms were full and by 1904 there were 3,000 volumes and a large number of manuscripts, pamphlets and maps.

In 1904, it was once again necessary to provide larger rooms to accommodate the collection. The former Y.W.C.A. room, in a quiet part of the Ladies’ College building, was given for the use of the library, while one of the old library rooms was made into a reading room for magazines and the other used for storing magazines. A large table capable of seating ten readers was placed in the new room, and new shelving was introduced.  As periodical literature was beginning to assume greater importance in the modern library, the librarian also began to acquire periodicals such as Harpers Magazine, The American Bookman and the Canadian Magazine.

The Ladies’ College library continued as a separate entity until the Memorial Library was opened in 1927. At that time, the bulk of the collection was moved, although a small library remained in the Ladies' College.

From 1900 to 1907, the librarian of the Ladies' College Library was alumnus Raymond Clare Archibald who was also teaching mathematics and was head of the violin department. Beginning in 1905, he began to develop a special section in the Ladies' College library. He named it the Mary Mellish Archibald Memorial Library (MMAML) in honour of his mother, a former Ladies’ College Vice-Principal who died in 1901. His purpose was to build a collection that would supplement the classical and theological emphasis of the University’s library collection, with books and journals of interest to those studying music, art, household science, and modern literature at the Ladies’ College. He focused on English and American poetry and drama and related subjects. In addition, he purchased early and rare sound recordings of authors reading their works, and of musicians and actors performing. His interest in folk-lore produced an excellent collection of folk songs, children’s and students’ songs, as well as a reference collection of folklore texts and journals. The MMAML also contained a unique selection of magnetic tapes and disks from which the voices of poets and dramatists could be heard. Archibald acquired, catalogued, and interpreted these materials, often during his summer break from teaching responsibilities.

The history of his alma mater was another interest of Dr. Archibald’s, and through personal initiative he sought to collect and compile a collection of original records that would document the history of the Mount Allison institutions. These records of the documentary heritage of the institutions were preserved and guarded in the storage area of the MMAML. This collection of materials subsequently became the core of the Mount Allison University Archives which was established during the 1969-1970 academic year.

The MMAML was moved once more when the Ralph Pickard Bell Library opened in 1970, where it remains housed as part of the libraries' Special Collections. The Collection currently contains materials relating to folk music, folklore, ballad literature, folk life, art song and college songs. The focus of the older material is largely English-language publications pertaining to these subjects in Canada, the British Isles and the United States. More recently, folklore and folk life resources from around the world have been added. The Collection currently holds over 12,000 volumes, with extensive back runs of journal titles. The rare items of the Collection (approximately 2,000 titles) are stored in the Rare Book Room, the journals are shelved on the ground floor of the Library, and all other print materials are housed in the Mary Mellish Room which is an open-access collection on the third floor of the R.P. Bell Library. Rare items may be used within the library. The Collection is supported by an endowment which Dr. Archibald began in 1905. 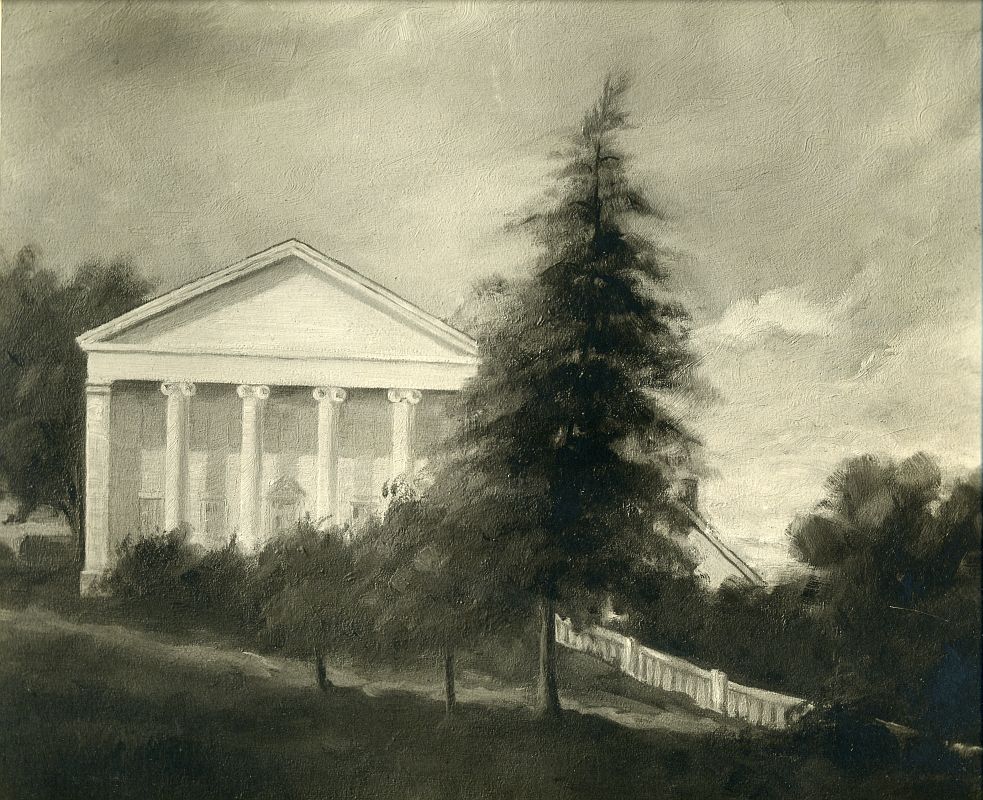 Lingley Hall, named after Bartlett Lingley who made a donation towards its construction, was built in 1854 on the site of the present Hart Hall. Dedicated January 31, 1855, it served as a lecture hall, music hall, and library. The library was located in a room under the gallery, next to another room that housed a museum. The library was initially for the male and female academies, but later housed the college library too. In 1878 the library was divided among the three Mount Allison institutions and moved from Lingley.

In 1910 the building was moved south-east on the hill to make room for the construction of Hart Hall. It was slated for sale or destruction, but when the College gymnasium burned on 28 March 1912, Lingley was moved to the north end of the football field where it was enlarged to serve as a gymnasium. It burned down on 31 January 1921. 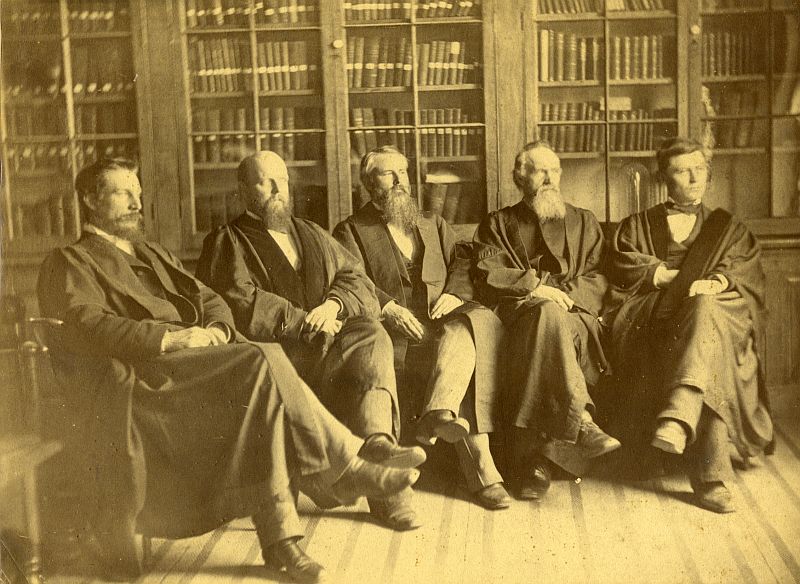 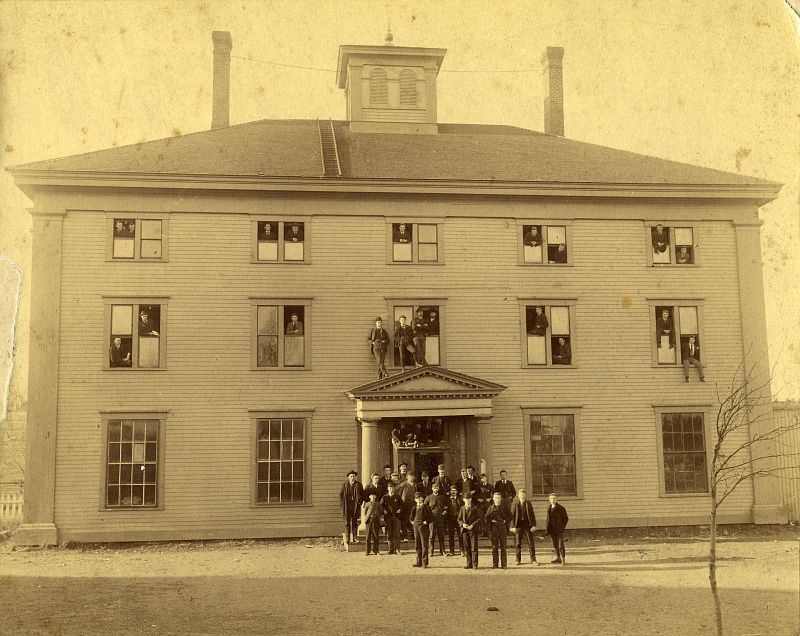 This building, dedicated in 1863, was located facing east and next to the driveway that led from Main Street to the President's cottage.  College Hall served as administrative offices, student accommodation and classrooms for the newly established Mount Allison Wesleyan College. Beginning in 1878 when the library holdings were moved from Lingley Hall, it also housed the college library in the west end of the second floor of the building.

In 1883, with the provision for administrative offices, classrooms and a library in the new Centennial Hall, College Hall was remodeled for use as a men’s residence, and later, as the Science building. It was destroyed by fire on 17 March 1933 and was not rebuilt. 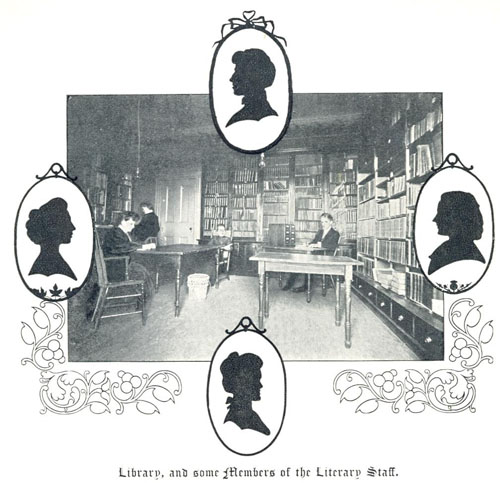 Taken from a calendar published by the Ladies' College, 1904 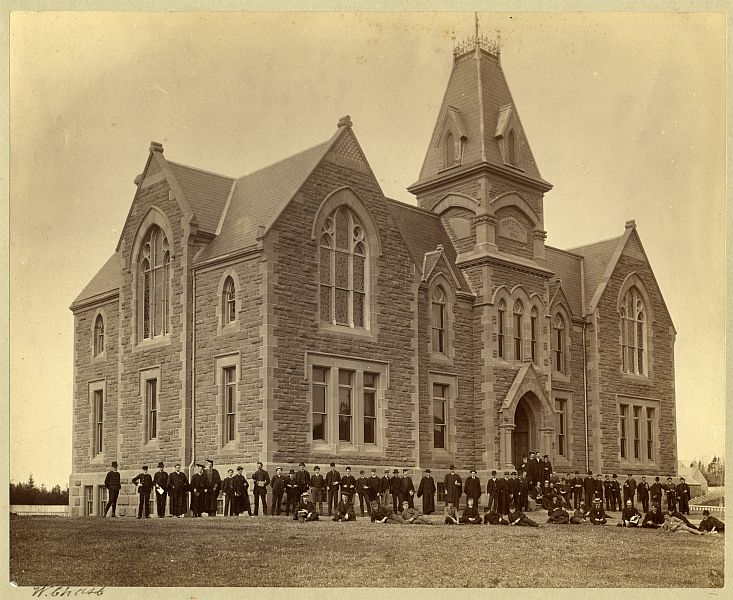 Centennial Hall was built in 1883 and housed administrative offices and college classrooms as well as a chapel and the college library. The library occupied the west end of the second floor until its 15,000 volumes were moved to the new Memorial Library in 1927.

In March 1933 the building suffered extensive damage in a fire. By this time, it housed all the arts faculties, classrooms, as well as the offices of the President and of several faculty members. It also housed a chapel, dedicated in memory of Rev. William Black (Black Memorial Chapel), which was located on the south end of the second floor. After the fire, the foundation and some walls remained standing and were incorporated into the building as it was reconstructed.

The newly reconstructed building was officially opened in January 1934. It also housed a chapel, on the third floor, which closed in 1965 when the new Chapel was opened. 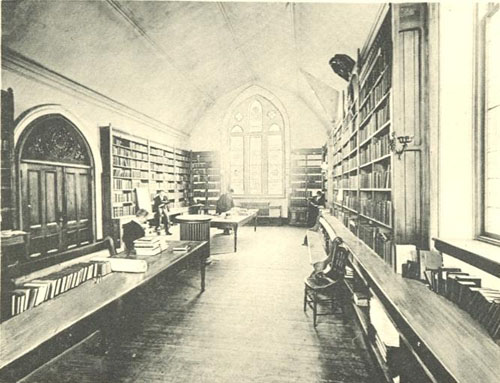 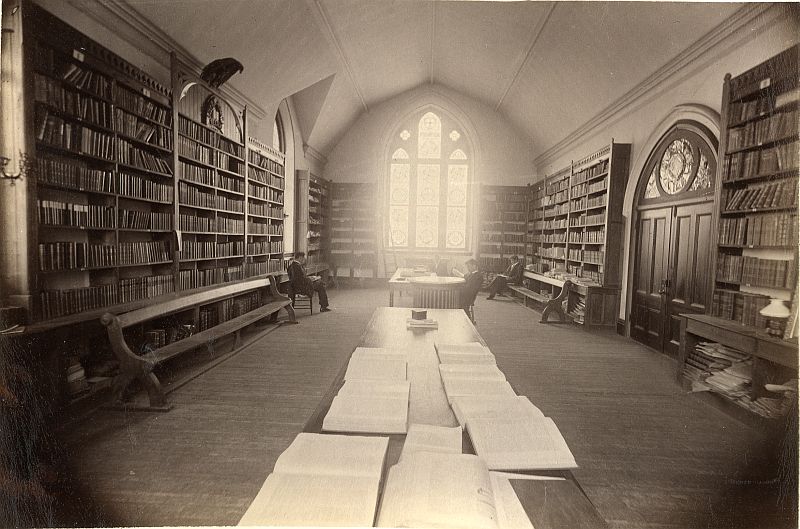