A Library Planning Committee was set up in January 1966 when it became obvious that a new library was necessary at Mount Allison. By May 1969, construction had begun [1] and the date stone containing various official university documents was laid on September 26, 1969 by Governor General Roland Michener. The Library was named for Mount Allison University’s first Chancellor and great benefactor, and the official opening of the $2 million Ralph Pickard Bell Library was held on 22 October 1970 with 300 guests in attendance. [2]

In a speech delivered at the opening ceremony,[3] Chief Librarian Eleanor Magee described the objectives of the Planning Committee and how the objectives resulted in the R P Bell Library. She noted that decisions were “based on the University’s declared aim of remaining a small, predominantly undergraduate university, with a probable maximum enrolment of 1,500 students for the foreseeable future” and that the Library would “continue to grow at its present pace of ten to twelve thousand volumes a year.” The Committee planned seating on the basis of one-third of the students being in the building at any given time – i.e. 500 seats. Recognizing that future developments in communication would require adaptability, accommodation for closed circuit television or other developments was provided for by conduits through the ceilings.The Committee estimated that in this way “no further expansion would have to occur before 1995.”

The result was a five-storey octagonal building of approximately 82,000 square feet. A film theatre with 59 seats, a microfilm room equipped with readers and a listening room equipped with individual booths for record players and four tape recorders completed the modern accoutrements. There were specially designed rooms for the holdings of Special Collections, including secure space for the Edgar and Dorothy Davidson Collection of Canadiana, a room for the W. P. Bell Acadiana collection, and three areas assigned to the Mary Mellish Archibald Memorial Library collection, which contained over 25,000 volumes, numerous periodicals, and over 4,000 recordings. The new Archives Section was assigned an office on the third floor and a storage area in the basement.

When the building opened, the holdings stood at 160,000 volumes and there were 30 full-time staff members - seven librarians and 23 support staff.  Currently the building holds more than half a million (500,000) volumes. There are six librarians and one archivist and 17 support staff.  University enrolment stands at approximately 2450 students. In 2004, the official name of the unit was changed to the Mount Allison University Libraries and Archives, to reflect the growing holdings and importance of the University Archives and the Music Library.

Over the years, “communication” in the form of information delivery has indeed changed, but far beyond that envisioned by the Planning Committee. Card catalogues have been replaced by an On-line Public Access Catalogue (OPAC). Because journals are now available electronically, the number of print journals acquired has dropped from 2,000 to roughly 200, while approximately 295,000 journals are available through online subscription databases.

A major project to revitalize the Libraries and Archives is now underway. For details, including information about how you can get involved, please see the Library Revitalization site. 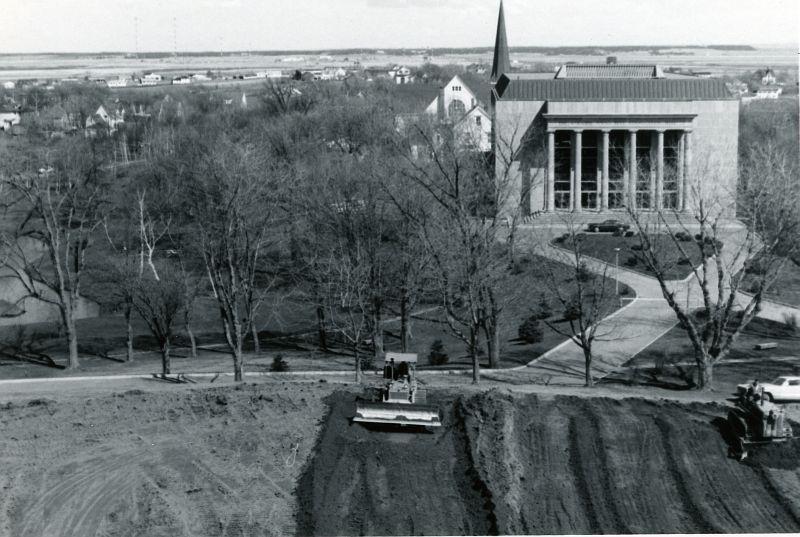 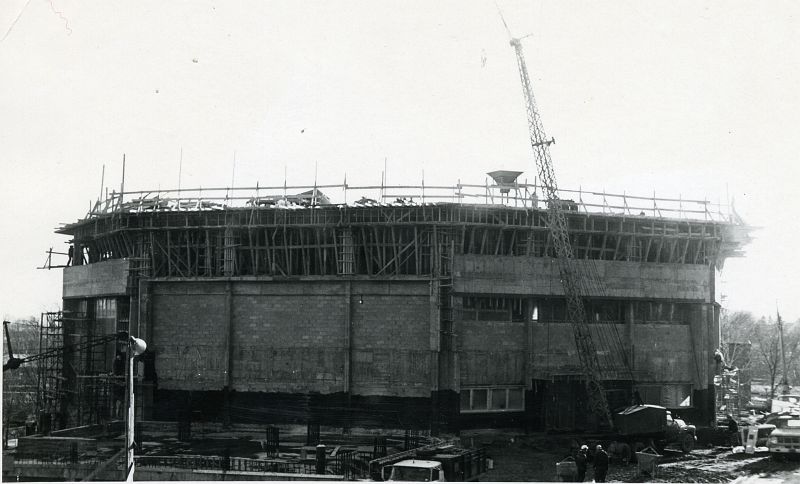 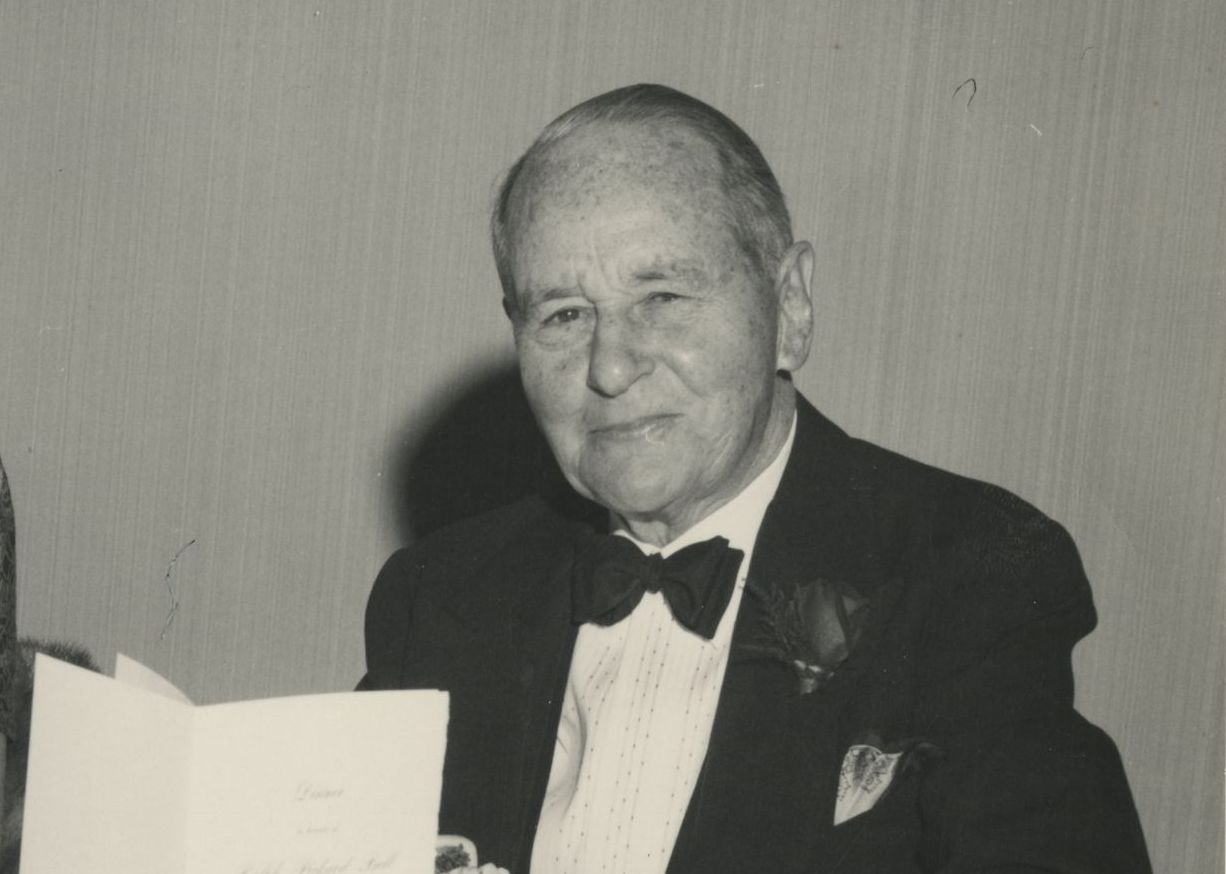 Ralph Pickard Bell was born in Halifax on 28 March 1886 the son of Andrew Mackinlay (1847 - 1918) and Mary Emerancy (Pickard) Bell (1847 - 1918).  He studied at Mount Allison University and later became his alma mater’s first chancellor in 1960.  During the Second World War Bell served as Director-General for Aircraft Production in Canada.  He was also a prominent business man who was involved with the timber trade and fisheries in Nova Scotia.  He spearheaded the creation of National Sea Products Limited and also served as a Vice-President of the Bank of Nova Scotia.  He was first married to Annie Marguerite Deinstadt (1884 - 1943) in Amherst, Nova Scotia on 22 May 1907.  Together they had three daughters.  After her death he married Marjorie Young Smith (1889 – 1966) of Shediac Cape, New Brunswick on 11 June 1944.  Ralph Bell died on 3 March 1975 at his home “High Head” at Martin’s Point, Nova Scotia. 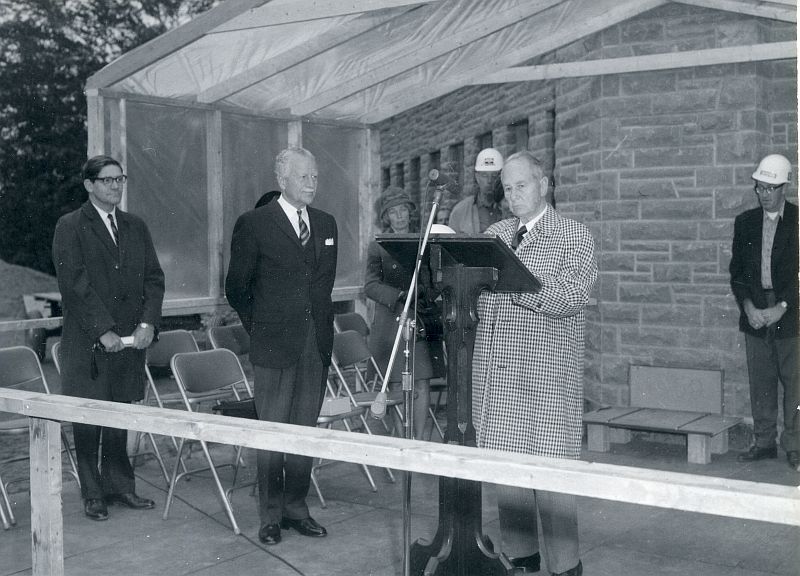 Three events were held in conjunction with the construction and opening of the Ralph Pickard Bell Library. On 26 September 1969, Governor General Roland Michener attended a ceremony to place the Historic Box that was sealed behind the datestone of the Library. He was assisted by Dr. Ralph P. Bell and President Cragg. 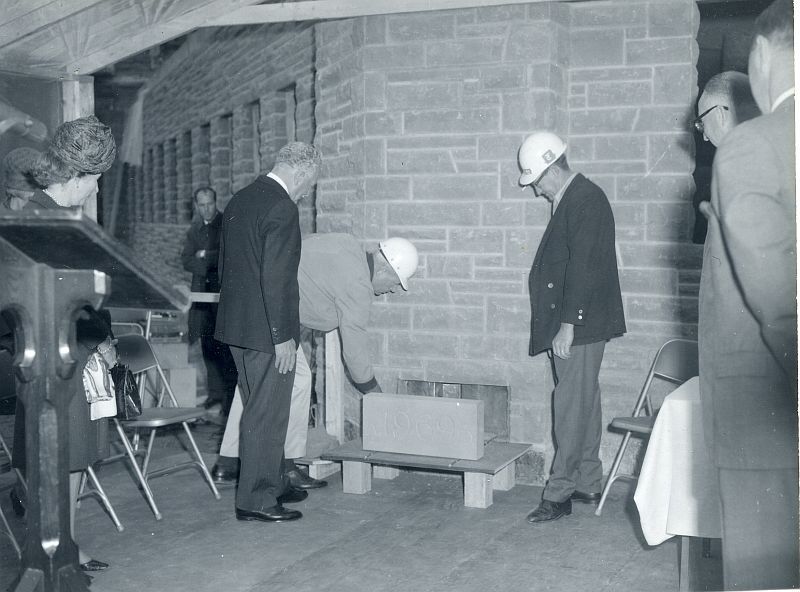 The Historic Box contained official university documents such as minutes of the executive committee, August and September meetings 1969; the Allisonian and the Mount Allison Record, 1969; papers presented a the Symposium on Canadian Studies, 25 September 1969; and similar material. 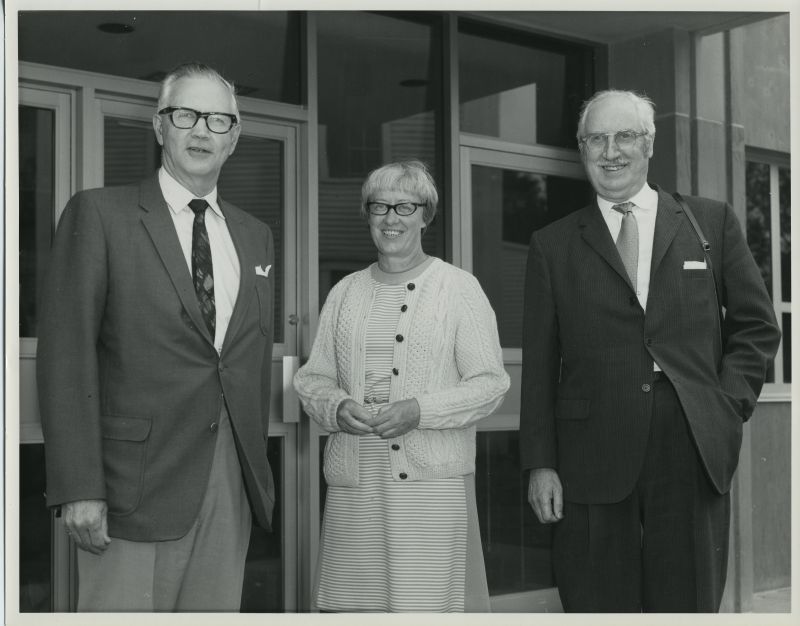 Once the move from the Memorial Library was completed in mid-summer 1970 and the building ready for use, there was a brief key-passing ceremony on the front steps of the building. Dr. L. H. Cragg received the keys from architect Dr. Bruce Brown. Dr. W. E. Hickey, President of Tantramar Contractors Ltd. also took part. 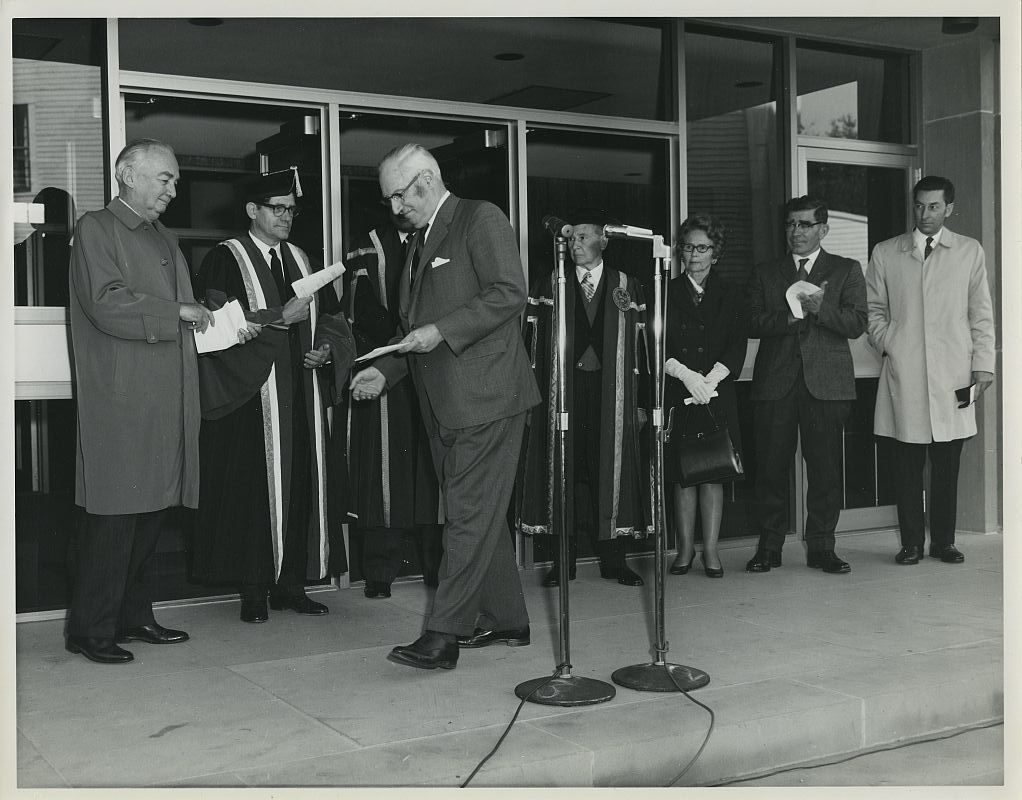 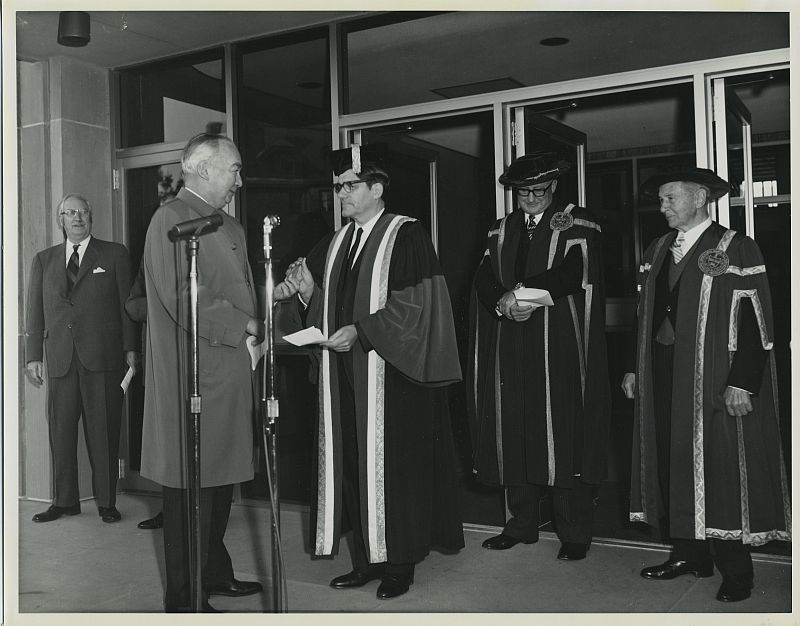 W. E. Hickey, president of Tantramar Constractors turned the key over to architect Bruce Brown who in turn passed it to K. B. Palmer, chair of the Board of Regents, who turned it over to president L. H. Cragg. Dr. Cragg noted that the library had already become the intellectual heart of the university community and suggested that the name on the building represented "one to whom we owe so much and will make it possible for us to go on remembering." He also thanked the New Brunswick government for its participation in the capital expansion program of the university. Minister of Education Wendell W. Meldrum spoke and said that a library should be "a place for coolness - cool dissent, cool debate and cool thinking." He also made brief remarks on the contribution that Mount Allison was making to the Maritimes. 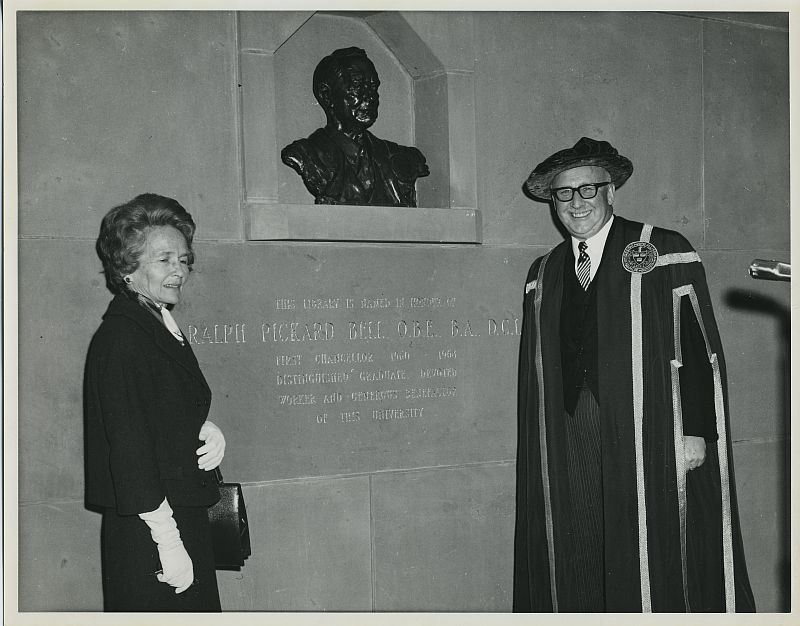 Dr. Bell's daughter Dorothy MacLaren unveiled a bust of her father which graces the main entrance of the Library. The plaque says: "This library is named in honor of Ralph Pickard Bell, OBE, BA, DCL, first chancellor 1960 - 1968, distinguished graduate, devoted worker and generous benefactor of this university". 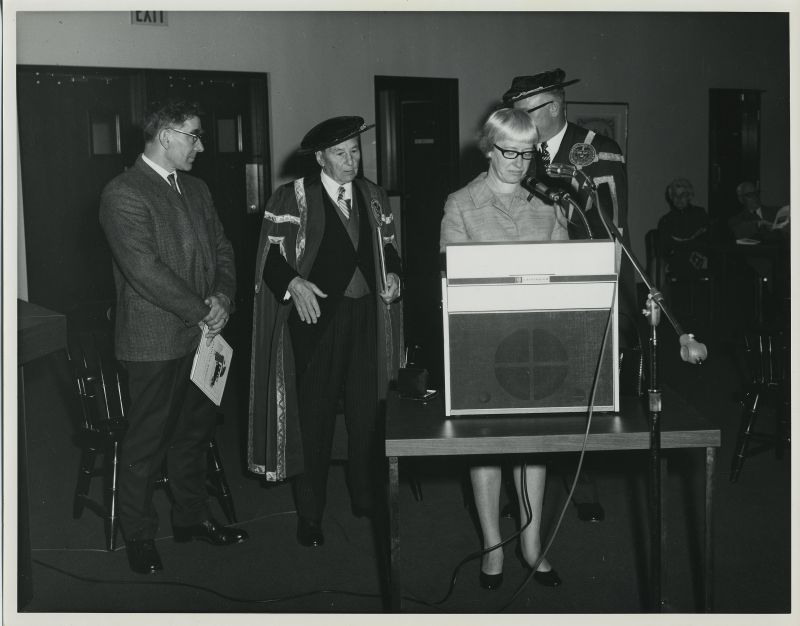 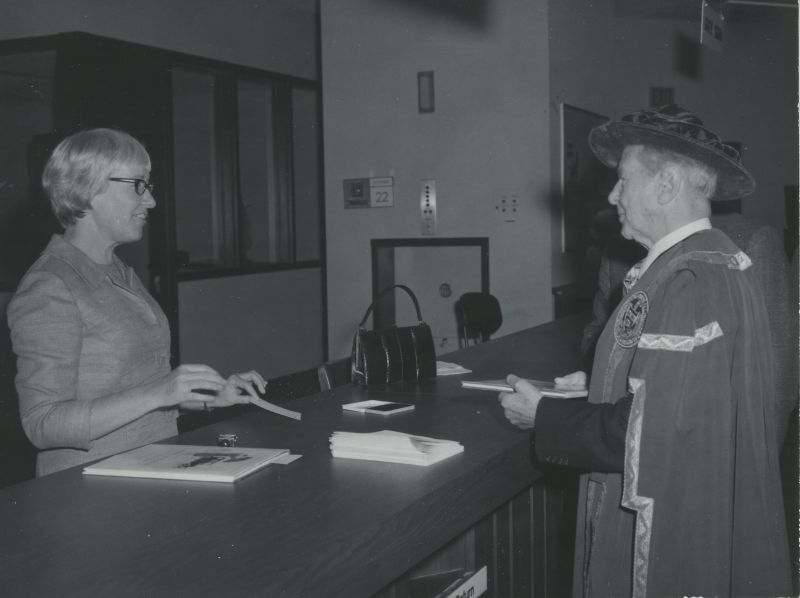 Eleanor Magee, university librarian, issued the first books to Dr. Bell and Mr. Meldrum and made a speech where she outlined the planning process for the Library, and the objectives she felt all involved had met. Tours were conducted during the remainder of the day. 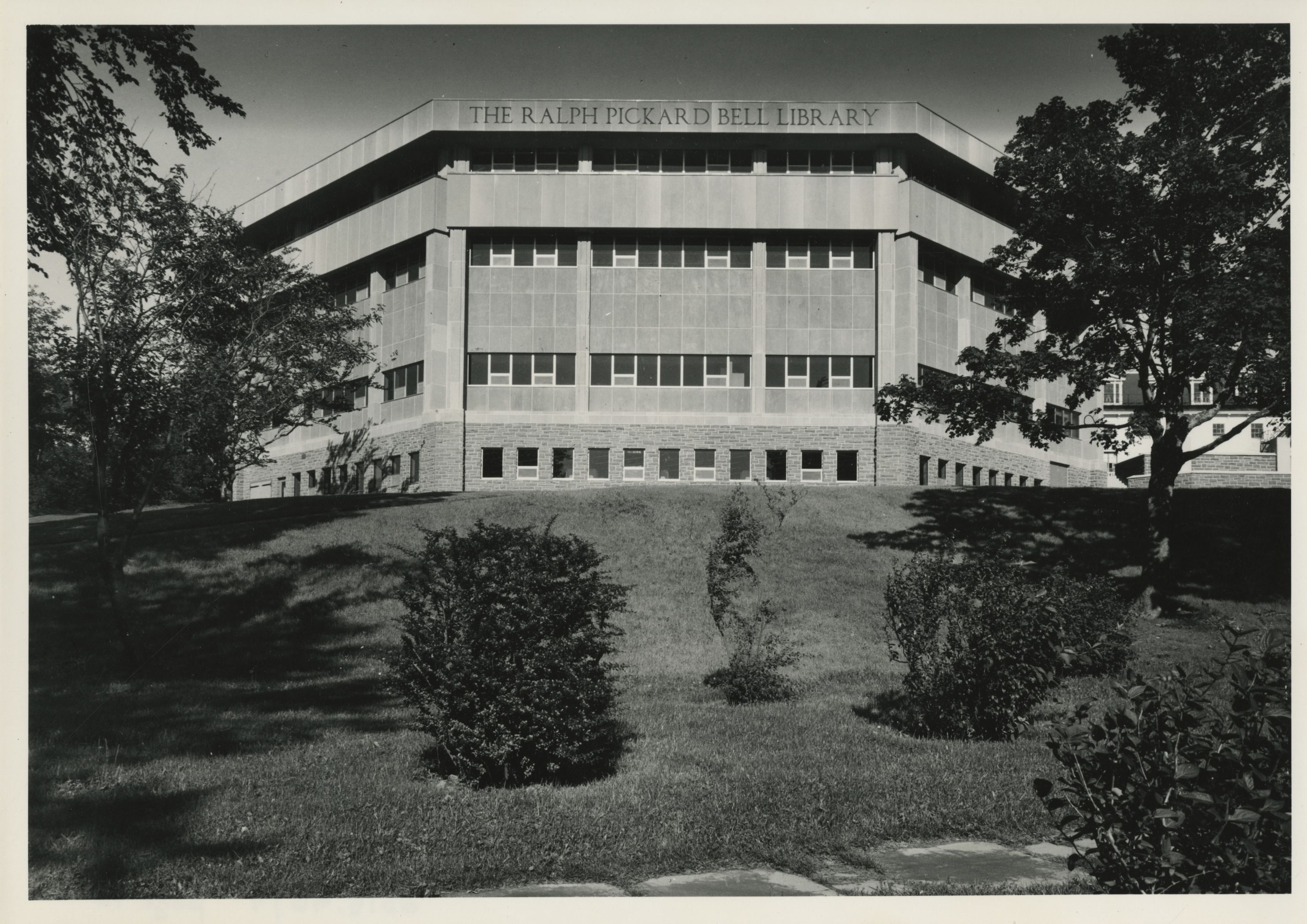 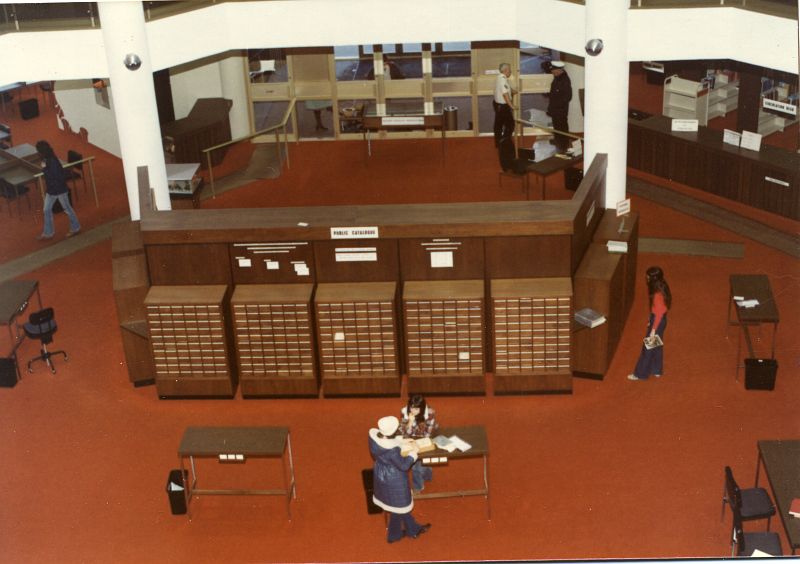 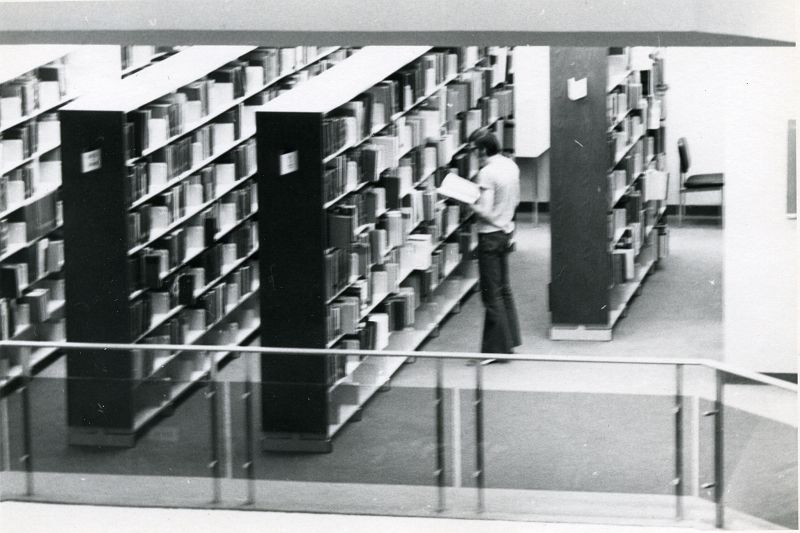 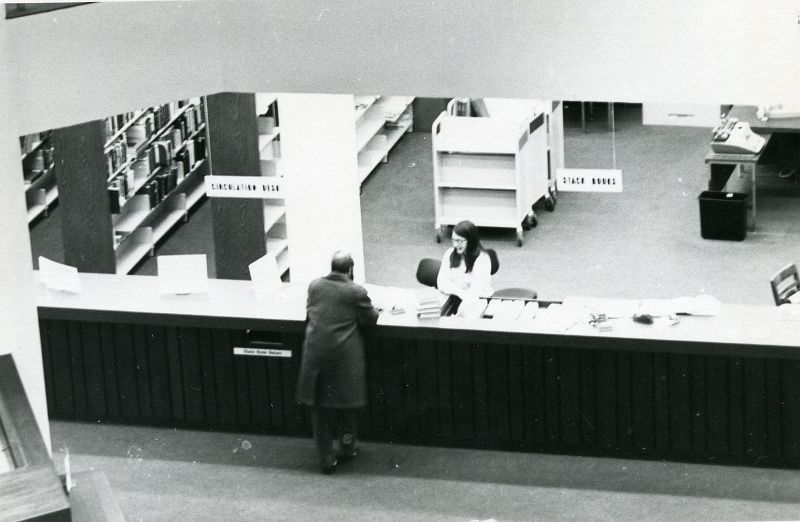 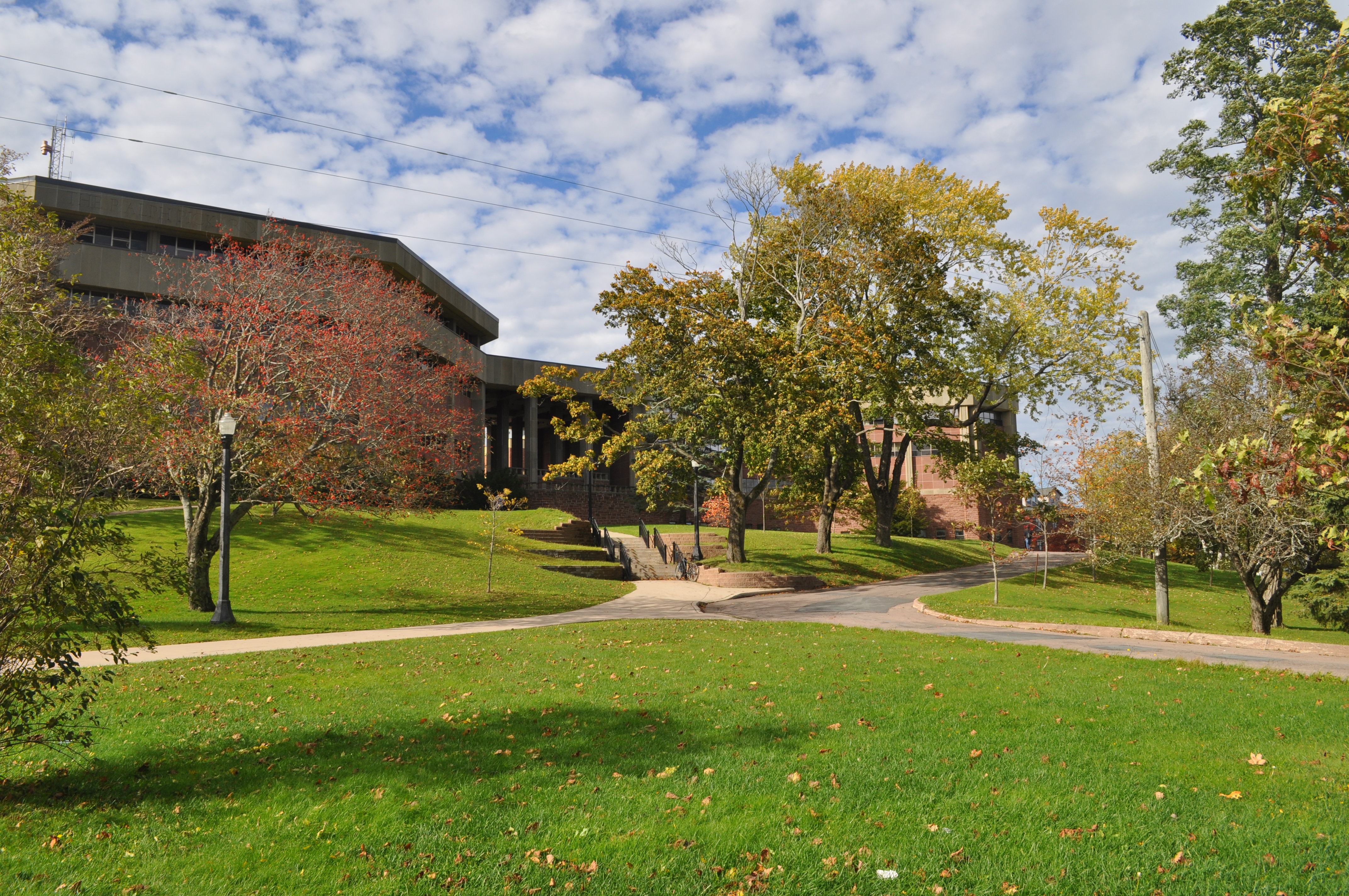 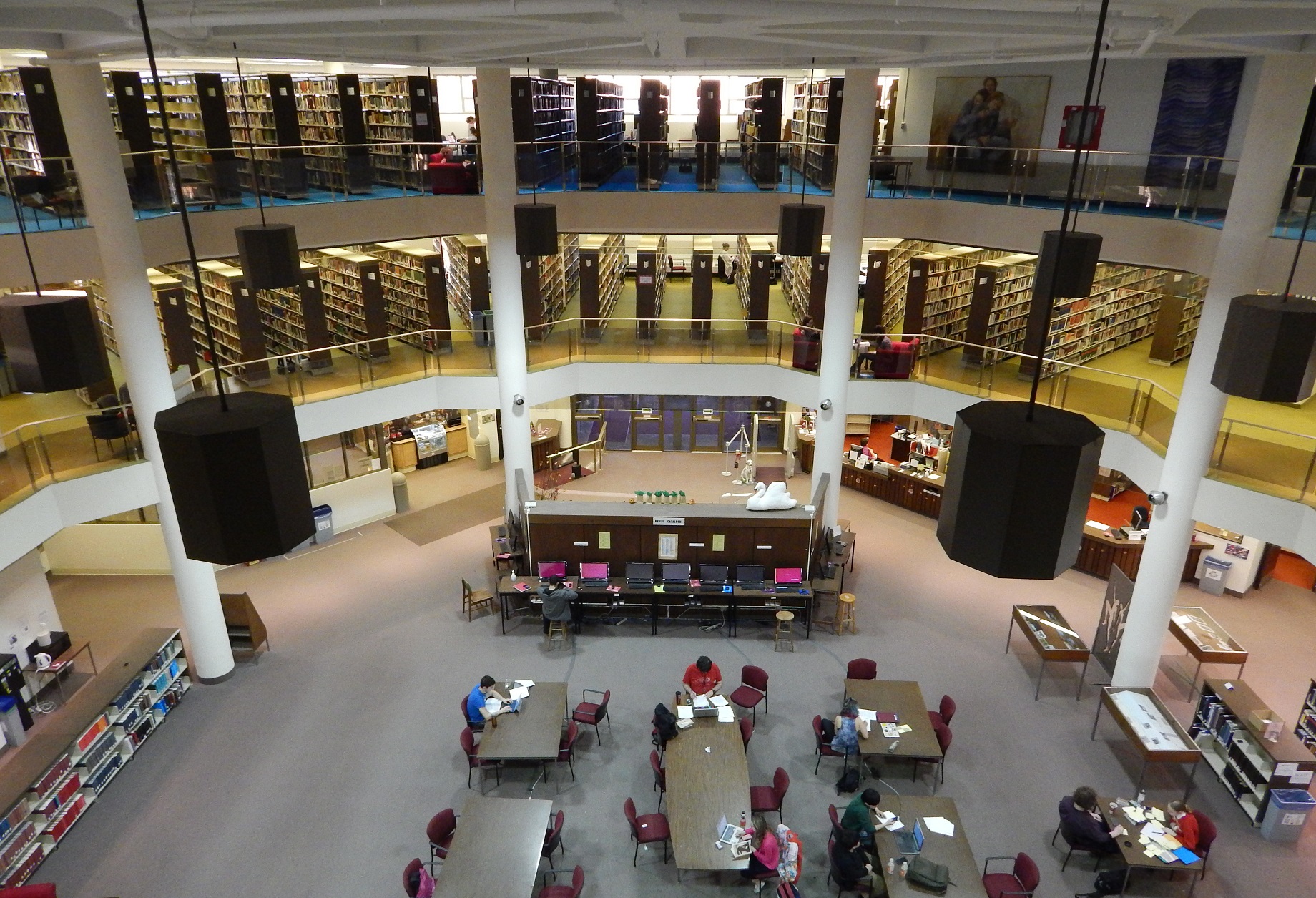 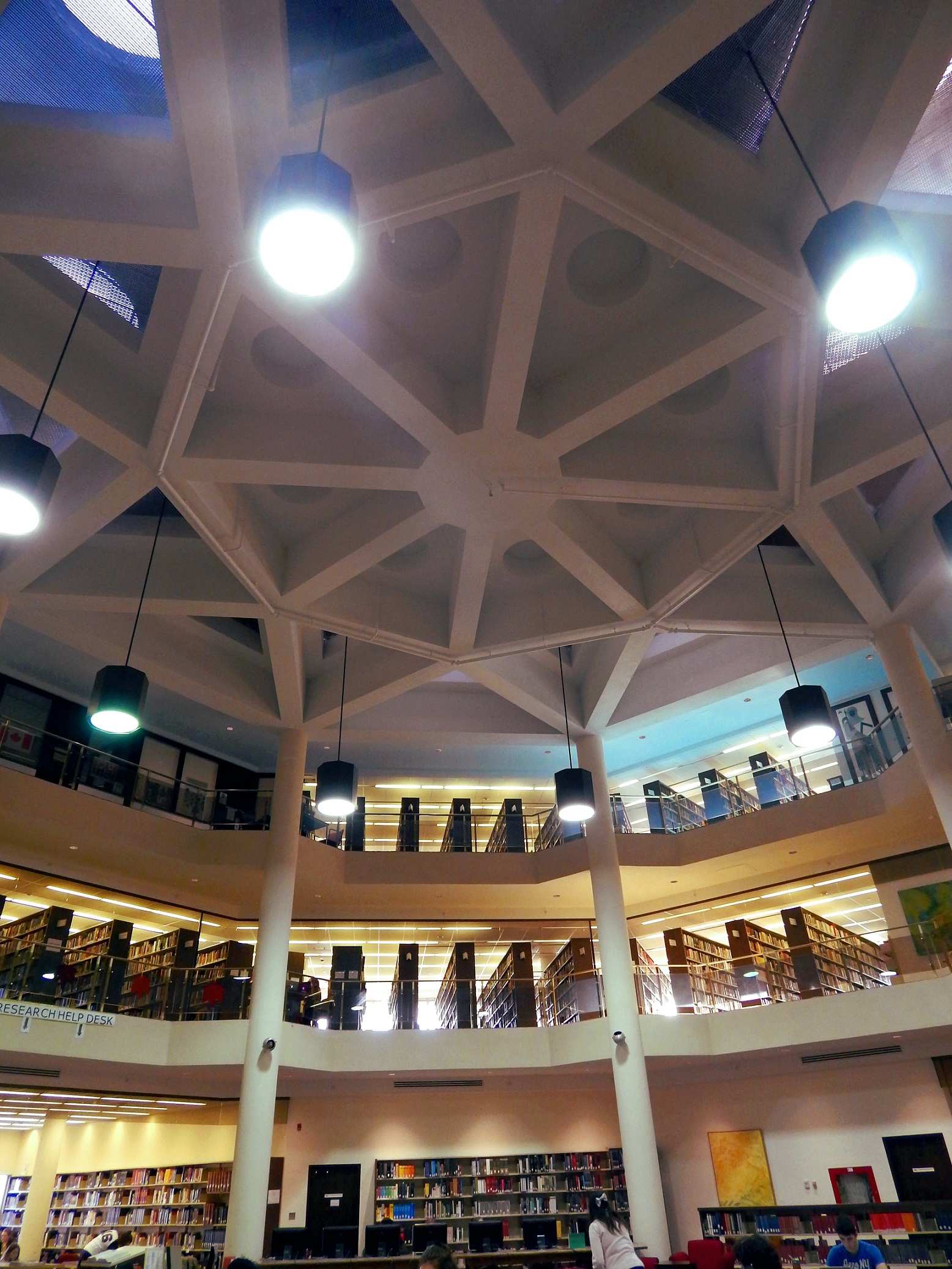 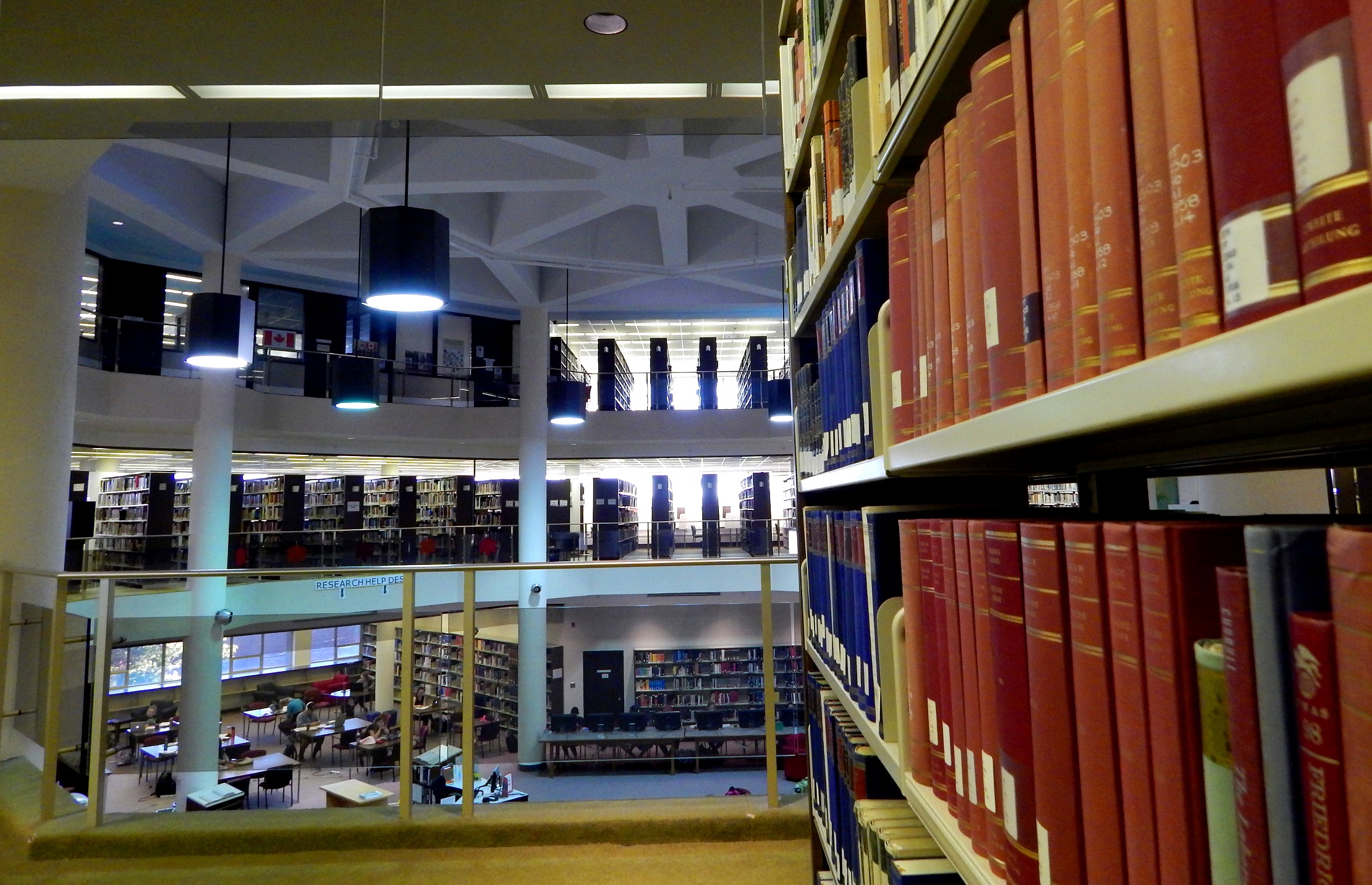