Stories of Celia Martin (abt. 1849-1941), known as Celie, have been passed down through the Lowerison family who employed her for almost eighty years, over forty of them in Sackville, New Brunswick, a block from Mount Allison University.

Celia Martin was the daughter of Peggy Martin who had been, according to reports, a slave with ties to the West Indies. By the time Celia was born in the late 1840s Peggy was free, but economically disadvantaged and dependent upon neighboring white families for employment. Celia’s father was known to be a white Westmorland schoolmaster by the name of King. Nothing is known about their relationship, but assuming it was consensual, history demonstrates that for black women in the nineteenth-century the concept of sexual consent was inevitably vexed where white male authority figures were concerned. Enough mixed-race children were born to women in Westmorland to suggest that such interactions had to have been known about, even if they “weren’t acknowledged” as one elderly resident phrased it, or as he amended, at least “not acknowledged by whites.” Indeed, gossip about who fathered such children persists to this day. As the Southern plantation mistress Mary Chestnut observed in 1861, “every lady tells you who is the father of all the mulatto children in everybody's household, but those in her own she seems to think drop from the clouds, or pretends so to think.” 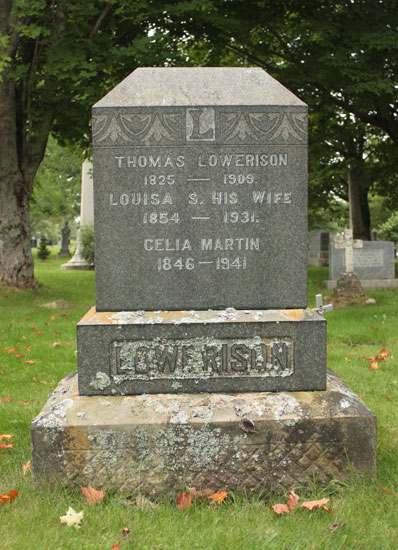 For whatever reason—though poverty was probably a significant factor—Peggy was said to have left her daughter on the doorstep of the schoolmaster’s family when she was quite young. We can date this act to sometime between 1851 and 1861, as in 1851 a one or two year old Celia was in the care of Charlotte Martin. (Charlotte was an elderly woman who appeared to act as caregiver to the children of other black men and women who worked and/or resided in the homes or on the land of others.) However, by 1861, Celia Martin was in a King household as a general servant.

Oral history has it that Isaac Lowerison first encountered Celia when she was in the care of her father’s family. There was snow on the ground, yet she was barefoot, perched on a fence minding the cows. In his capacity as overseer of the poor Lowerison removed Celia from the home, and placed her in the care of his sister. Celia would stay with the family until her death, and is buried with them in the Rural Sackville Cemetery.

In all probability, Robert King, known as “schoolmaster King” was Celia’s father. We know her father was a schoolmaster, that Lowerison removed her from her father’s family, and that Celia was recorded in the household of a widow King, living next door to schoolmaster Robert King and his family, as of 1861. Affirming the oral narrative, in the 1881 Census she is identified as Celia King, not Martin. This in particular establishes her parentage was general knowledge.

If the Kings are easy to trace, Peggy Martin might be a bit more difficult. There are two possibilities: Margaret Martin (1790-?) and her daughter Margaret (1831-?). As Celia’s mother Peggy was said to be owned by the King family before the emancipation of slaves (which took effect August 1, 1834) it could have been either. However, given the age of the Margaret, Sr. at the time of Celia’s birth (for which the 1851 Census is probably the most accurate record) it seems more likely it was the daughter.

While Celia retained ties with her family, she spent far more time with the Lowerisons, both a part of the family and apart from it. Breaking off her own engagement to a black man, she raised two generations of Lowersion children and was much beloved by them. That said, as recounted in a history of black domestic workers, white employers often perceived long-term black servants as “just like a member of our family” even as compelling evidence suggested their treatment—and feelings--varied. Accordingly, by their own admission, Celia she did not become “part of the fireside family,” first in the Lowerison home in Frosty Hollow and later in the home at Park and Landsdowne in Sackville, where the family relocated in the late nineteenth century. In the new house, she woke at 5am, used the back stairs, and worked until dark.

As Celia was not literate, and had no younger family in town with whom to share her feelings, we have no account of how she felt about her situation. Given Celia’s father’s profession, and her residence with his family during her youth, the fact of her illiteracy seems to add insult to injury. A daughter of the Lowerison family taught Celia to sign her name for legal reasons, but that was as far as her education went.

The family recalls her as an exceptionally capable “mistress of the kitchen,” able to reconstruct any cake from taste alone. On Friday nights she socialized with a local white family who has not been identified. Celia lived with the Lowerison family until her death, though, according to her death certificate, for the last ten years of her life she was not employed as a domestic servant; instead the Lowerison daughter she had helped raise in turn cared for her. Following Celia’s death early morning of July 14th, 1941, a funeral service was held at St. Paul’s Anglican Church, and she was buried in the Lowerison family plot.