This text originally appeared as “Tracing the Black Past in Nineteenth-Century Westmorland.”The White Fence: Newsletter ofthe Tantramar Heritage Trust, no. 48, 2010.

Recently, the Mount Allison Archives received the donation of a handwritten book documenting early and mid-twentieth century black life in Westmorland County, and recording details of the families who lived in the black neighbourhood of Green Hill, at Mount Whatley. The book was a gift of Clyde Gabriel of Amherst, a grandson of its keeper, Burton Martin (1877-1948), whose regional ties in turn can be traced to eighteenth century Westmorland. Mr. Gabriel’s donation presents a rare opportunity to consider what life was like for early black residents in this area. 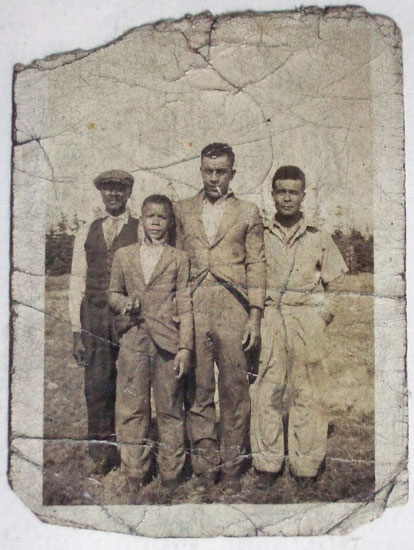 Burton Martin was a direct descendent of Peter Martin (circa 1790 - 1851). In all probability, Peter was connected to the Martins mentioned in Howard Trueman’s The Chignecto Isthmus and Its First Settlers (1902). As Trueman wrote, “Sennacherib Martyn was a captain in Winslow's expedition to capture Fort Beausejour. He brought with him to Westmoreland Point, as slaves, a negro family, to whom he afterwards gave their freedom, and gave them also his name (now spelled Martin).” By his own account,  Peter was born in the United States, almost a decade after Sennacherib’s death (circa 1782), arriving in British North America in 1798. Thus, it would seem he was either informally adopted by those the captain held as slaves, or acquired the last name by proximity.

Certainly a Peter Martyn/Martin was the subject of several sales in the region. The Mount Allison Archives holds a copy of an 1804 bill of sale in which James Law agrees to “bargain and sell unto the said Titus Knapp a Negro boy about twelve years old named Peter, to have and hold said Negro boy to himself and his heirs forever.” While Peter’s last name is not mentioned here, another record speaks of Titus Knapp, resident of both Westmorland and Fort Cumberland, who owned at various points Sippio Milligan, Peter Martyn, Lucy Martin, Bacchas Newton and several others whose names are forgotten. Then, in 1810, Knapp sold Peter Martin to James Isaac Hewson for $42. It is possible that Hewson then sold Martin and later repurchased him: as one resident noted, “When I lived with Dr. Smith I was familiar with the Fort…. Cl. Gay lived and had a large establishment there. He had a large farm and he had a bunch of negro slaves. He traded in them. They were cheap. He sold one named Peter Martin to James Hewson for $40.” Regardless of whether the raconteur misremembered, the fact remains that Peter Martin was, from a very early age, subject to upheavals, familial ruptures, and adjustments to the expectations of new masters and mistresses, with little or no agency in the matter.

It is said that Peter Martin remained with James Isaac Hewson “until after emancipation of slaves,” in all probability meaning after August 1, 1834, when the Slavery Abolition Act of 1833, outlawing slavery in the majority of British holdings, took effect. At that point Peter would have been just past forty years of age. Peter would have celebrated freedom not only on his own behalf, but on that of his eight children as well, all but one of whom had been born pre-Emancipation. Whether or not his children were born enslaved is unknown: the general convention was that children followed the state of the mother. In this case, their mother was Margaret, (circa 1792-September 1880), a New Brunswick-born woman about whom little is known. Circumstantial evidence and oral history suggests she may have been owned by the family of Robert King, schoolteacher at Mount Whatley, but no documents have survived to verify this. However, whether she and the children were free or not, various episodes in United States history demonstrate that as long as slavery existed free black men, women, and children were vulnerable to kidnapping and enslavement. Thus emancipation came as a relief to black individuals and families of every legal status.

By the mid-nineteenth century Peter and Margaret were entrenched in Westmorland, surrounded by children and grandchildren. The 1851 Census identifies Peter as African and a laborer, living with a white family on the one side, and as the head of the first of several black households on the other. In each instance, the black men are identified as laborers, perhaps for the nearby Trueman families. While Peter’s date of death is unrecorded, it seems likely that he died sometime between 1851 and 1861, as he is absent from the latter census.

If Peter’s life was one of upheavals, that of his son, Archibald (circa 1828-February 1910), appears to have been more stable. Archibald, also an unskilled labourer, was rooted in the Aulac community of Green Hill where he had been baptized, and where he would eventually be buried. There appeared to have been nothing to distinguish Green Hill from Mount Whatley, except the skin colour of its residents (as an area, it started just past the Mount Whatley Loop Road, and continued west over what is now the Trans-Canada Highway, Route 2). Black and white families attended the same church, and were buried in the same cemetery, as early as the second decade of the nineteenth-century (though strangely, black couples seemed to marry elsewhere). That said, residence in Green Hill may have been less a matter of choice than of necessity. As one elderly Westmorland resident noted, well into the mid-twentieth century, there was a “gentleman’s agreement” that one did not rent or sell land in Sackville proper to black men or women. This is not to say that Sackville did not have black residents: as of the 1824 Westmorland Census, there were 26 black adults and children in Sackville Parish, and 39 in Westmorland Parish (compared to Botsford: 1; Hillsborough 11; Moncton: 2; Salisbury: 1; Hopewell and Dorchester: 0). Later censuses, such as in 1861, are less reliable on this matter, as race was not consistently recorded. Nonetheless, the black population of Sackville & Westmorland Parishes appeared to be maintaining its numbers at that date. However, that was soon to change as some Sackvillians moved elsewhere in search of better financial and educational opportunities. Green Hill would soon become the geographical locus of black life in late nineteenth-century Westmorland and Sackville Parishes, its numbers rivaled only by Dorchester.

No doubt, as a day laborer, Archibald Martin was among those who lived in Green Hill and worked in Sackville on occasion. It did appear that he owned his land, but he seems unlikely to have possessed livestock, as no black residents of Sackville did at the time. He probably did not earn much, but was confident in his ability to support a wife and family, marrying a Miss Miller (circa 1825-February 1905). Years later, William Albert Trueman would recall her: “Palmela Miller married Archibald Martin. With pride she would say “I’m Mrs. Archibald Martin, she that was Palmela Miller.” We called Mrs. Archibald Martin “Millie”. She was a religious woman. When called to lead in prayer at prayer meetings, she would do so very nicely. I have also heard her at family worship in her own home.”

Millie’s pride in her marriage was no doubt tied to the protection and respectability it afforded. Surviving records show a striking number of illegitimate and mulatto children born in local black families, no doubt a by-product of the sexual vulnerability of black women, especially those sent out to work in the homes of better-off families from as young as age ten. Such labour practices highlight another unfortunate reality: the majority of black residents of nineteenth-century Westmorland County appear to have received little, if any, schooling. While in the nineteenth-century black children are recorded as students in Dorchester, preliminary research suggests schools for Sackville and Westmorland Parishes were uniformly white. Certainly Archibald Martin was illiterate, and while Millie claimed to have been able to read, she was not able to convince at least one census taker of her ability.

Still, Archibald and Millie’s son, Hanford (circa 1856-1901), somehow managed to achieve basic literacy. When he married Alice Louisa Cook on June 2, 1875, they no doubt agreed that their children would be educated. By 1901 all of Hanford and Alice’s offspring, including Burton Martin (with whom this article began), were able to satisfy the census taker of their literacy, a skill of which they could be rightfully proud given that none of them—not even twelve-year old Martha Maud—had attended school in the last year. The family appeared proud of their accomplishments: the obituary of Burton’s brother noted that “he was educated in his birthplace” (Aulac), a coded way of attesting to his literacy.

Burton Martin’s book is not a standard diary or scrapbook. Indeed, it seems to have served a variety of purposes. Martin recorded the births and deaths of family members and neighbours, the dates of family visits, and financial transactions.  For example, H. F. Carter paid $20.00 one July 3rd and on June 7th , 7lbs of butter was churned. And yet alongside such domestic details are events of world importance: Martin appears to have used his book to compensate for the broader education he did not receive. One example of this is a handwritten list of important and seemingly unrelated events:

The list continues: the spelling is perfect, suggesting Martin copied details from newspapers. It also seems likely some notes—especially about family matters—were recopied from earlier books or documents, as a comment about a 1929 trip to Truro suggests. All in all, the book appears to be not only serve as a form of record-keeping but also a document to be consulted, preserved, and passed on. It thus is fitting that, after Burton Martin’s death, his book was maintained and added to, probably by his daughter, Minnie.

At a basic level, the book reveals day-to-day life in Westmorland, and sheds light on the routine work a day labourer might perform, from hauling wood to digging graves—which might account for Martin’s seeming preoccupation with death. But it also provides insight into daily domestic details and the reality of economic instability: in February of 1945, at almost sixty-eight years of age, Martin and his common-law wife were working daily. On February 16th, 1945, Martin was able to record he had $25.00 in the bank. A month later he indicated that he had purchased a battery radio. This was an event of some importance in a family where getting new socks was deemed noteworthy. Given how rare it is that personal records of hardscrabble families survive, Martin’s book promises to be incredibly interesting to regional historians studying working-class families.

And yet if the records of regional working-class families are scarce in archival repositories, the records of Black New Brunswick families are almost entirely absent. Mount Allison is not unusual in having a dearth of such materials. For this reason, Burton Martin’s book is additionally compelling. It is not simply that it documents a presence and a community that has been forgotten; it also adds to our understanding of a historic black community with its intricate web of family ties, suggesting the support and sustenance such relations enabled. But perhaps most compellingly, it attests to a desire of a marginalized family that was absent from the record books to be remembered, and to remember those who came before.