In ‘Round a Chignecto Hearth, under the heading “Negroes of Green Hill,” William Albert Trueman recounts of the late nineteenth-century, “Seventy-five years ago there were seven or eight Negro families in the district and a family in Fort Lawrence that I knew well. Some family names were: Martin, Gross, Archibald, Coffey, and Miller. The Surreys lived in Fort Lawrence.” Other names he might have included were Gay and Howe.  Green Hill was the name for a stretch of road in Mount Whatley, now bisected by the Trans-Canada Highway, Route 2. Located halfway between Sackville, N.B. and Amherst, N.S., residents might find themselves walking in either direction for work, not only in the nineteenth century, but also the twentieth.

For the most part, nineteenth-century residents of Green Hill were in the employ of their white neighbors, including the Truemans and the Carters, with whom some families would have a long association. Alongside white residents, they worshipped at St. Mark’s Anglican Church, Mount Whatley, and were buried in its graveyard. Unfortunately, no marriages of black residents are recorded in extant church records, though Trueman recounts that George Nash and Lizzie Surrey were married in a private home. But community members did intermarry, sharing accommodations, pooling resources, and providing emotional support for one another. As both men and women worked and could even live in the homes of their employers, children might be cared for by extended family or community members: in 1851 Charlotte Martin, who was almost seventy, appeared to have charge of seven children of various relations. 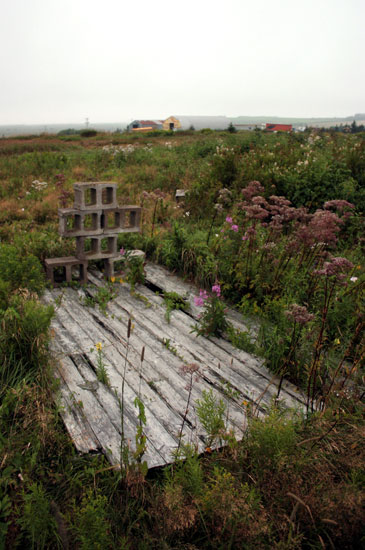 Many of Green Hill’s residents were descended from people originally enslaved at Fort Lawrence or elsewhere in the region. However, other routes to Mount Whatley did exist. In the early part of the twentieth century, one elderly resident recalled his own arrival in Canada as a fugitive slave (presumably between 1850, when the Fugitive Slave Law made northern states unsafe, and 1861, when the American Civil War broke out). He spoke of hiding for several days in the attic of the Gen. John Brewer House, in Robbiston, Maine, "until the conditions were right to get them across the river into Canada under cover of darkness."

Increasingly in the 1880s and 1890s Green Hill’s black residents moved away. A variety of factors were at play: limited economic and social mobility were probably crucial. Access to education was no doubt another factor, as black children from the area seemed to be absent from the school system, with exceptions in Dorchester. As Greg Marquis notes of the mid-nineteenth-century Maritimes: “Social segregation was a fact of life. Blacks, as in the Northern states, were shut out of the professions and most non-service, non-labouring jobs. White school children shunned their dark-skinned classmates.” Attitudes about racial inferiority were not limited to the U.S., and materials we would now recognize as racist—including a counting book featuring derogatory images of blacks—clearly found their way into the homes of Westmorland whites. At least one turn-of-the-century black family, originally from Sackville Parish, but who had relocated elsewhere, returned for a visit to the land they had lived on only to be burnt out by the legal owner. Those who might want to purchase land in Sackville Parish were thwarted by a so-called “gentleman’s agreement” not to sell or rent land to those who were either black or French.

If such practices were not enough of a deterrent for black residents hoping to stay in the region, there was also the matter of exogamy. By the late nineteenth-century most black residents in Green Hill were closely related to each other. As whites saw intermarrying with black residents as a violation of racial codes, this further limited romantic options. Ultimately, Boston appeared to be a popular destination for Westmorland’s black residents, and Green Hill was no exception. We can see the advantages of moving even with single families: the older children who came of age in Westmorland might be able to read, but not write. By contrast, their younger siblings, born in Westmorland, but brought up in Boston, could do both. The economic advantages were notable. Some who could pass as white chose to do so to secure additional opportunities, an impossibility in a small community where everyone knew their antecedents. Yet despite the advances relocating might facilitate, it is clear some retained an affection for their birthplace: at least two former residents, Eliza Brown Coffee and Charlotte A. Surrey (mother of Bedford Surrey), died in Boston but were buried “at home.”