Escape from slavery was never easy in geographically isolated regions. While sympathetic whites were not mandatory, they were certainly helpful. As slavery was not uniformly endorsed in the region—causing conflicts for Methodist slaveholders in particular—some white residents must have felt morally obligated to take a stand. Among these was Mrs. Mary Pipes of Amherst Point, who, probably sometime after 1775, concealed Thomas and Jimmie Bowles from Thomas Watson of Fort Lawrence. Even as Watson threatened to break down the door, Pipes did not back down. When Watson returned to Amherst for reinforcements, the men escaped. That Pipes seemed certain her absent husband would support her stance might be attributed to her father-in-law’s position as a Methodist lay preacher. Likewise, that the family “owned a good farm” would have added to their stature in the community, and left her less to fear from Watson, a generation older, and with considerable clout (he was elected sheriff in 1783). Whether either of these Bowles were the ancestors or relations of Cornelius Bowles (1793-1861) who appears to be the progenitor of most of the Bowles in the Cumberland region today is not documented, though it seems likely. 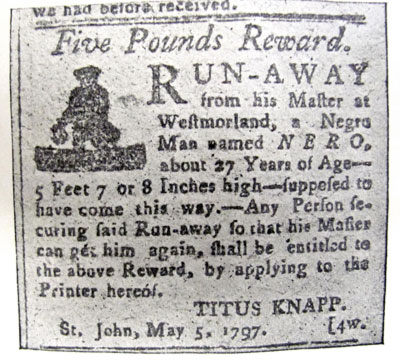 In regards to the advertisement featured here, we don’t know if Nero had similar assistance in plotting his escape. But we do know he was not the only individual held by Titus Knapp (1756-1828). Notably, Knapp also possessed bills of sale for: “Sippio Milligan, Peter Martyn, Lucy Martyn, Newton Bacchus and several others whose names are forgotten.” Newton Bacchus was actually Bacchus Newton (c.1796-?), a “mulato boy” [sic] purchased by Knapp from the widow Sarah Allen on May 10, 1808. He would go on to be progenitor of the Newton clan, and is the George B. Newton (c.1794-?) who appears in the 1851 census as a farmer, married to Lucy Dixon as of Dec. 4, 1833. Scipio Milligan is probably the same individual who married Jane Dixon (possibly Lucy’s sister) Dec. 2, 1821 and acquired land on the River Hebert as of 1825. While Peter Martin is discussed elsewhere in these resources, the fate of Lucy Martyn is unknown. It is possible she is the unnamed slave once owned by Sennacherib Martyn with whom the white Yorkshire settler James Dewthwaite (1740-bef. 1792) had a relationship following his first wife’s death. If so, this would make her the ancestor of all who carry the Douthwright name in North American, black and—now—white.

No documents survive aside from this one which connect Nero and Knapp. However, ships’ records may hold a clue about Nero’s origins. When the Nicholas & Jane departed New York in June of 1783, Dinah Knepp (1754), Alice Knepp (1777-?), and Job Knepp (1782-) were all aboard, as property of Captain Knepp [sic], travelling with him from New York for Fort Cumberland. Aboard the ship Trespassy, similarly bound for Fort Cumberland, was a boy of fourteen named Nero, the property of a Captain Palmer. He would have been the right age to be Knapp’s 1797 runaway.

Knapp’s 1797 advertisement is a bit naïve: little effort is given to describe the runaway beyond height and age. (Comparable advertisements in the Canadian Maritimes and the U.S. might cite scars, skin shade, preferences). Certainly it seems probable the name “Nero” was abandoned in the quest for freedom. While it is not known if Nero was successful, he does not appear again in the extant records of Westmorland County.

The end of slavery did not concomitantly bring equality. There is an 1850 record of William Gabriel, a black Amherst resident, bringing a suit against a stagecoach driver for kicking, whipping, and striking him—essentially, treating him like a slave. While the courts were one avenue of expressing dissent, less formal routes existed. Notably, in 1843, a group of young black men (four from the Surrey family, and one Rufus Martin), accompanied by a white friend, made mischief outside of a singing school in Pointe de Bute. A nineteenth-century phenomenon, singing schools were where young people went to enjoy themselves, often away from parents, in order to flirt and court. Given the taboos against interracial courtships, it is more than likely that black residents were excluded from such activities, and the Surrey men and their friends thus took action. Emboldened by alcohol, they turned the schoolmaster’s horse loose, pelted the schoolmaster with snowballs, and followed this up by singing blackguard (i.e. bawdy) songs. Stephen Surrey took it further, taking it upon himself to “strip himself before the window and exhibit his nakedness to the school inside”—probably meaning he “mooned” the gathering. A rather ribald form of social protest, certainly, but social protest nonetheless.