By her own account, Mary Anne Firman was born Dec 24, 1828 in New Brunswick. As of 1851, Mary Anne was a live-in servant in the home of Henry Carter, a neighbor to the Trueman family. In ‘Round a Chignecto Hearth William Albert Trueman recalls her pride, independence, and financial acuity:

“Mary Ann, in some ways, was a different type of person than most of the others in the district. She was tall, straight and well-dressed as I remember her. She had a little money and in the last years built a new house on the same site as her old one…. The other Negroes of Green Hill used to claim that Mary Ann was ‘high hat’ and she considered herself a little better than they were.”

Given her residence in the Carter house, and as the daughter of John and Susan, it seems Trueman—who was born in 1875—may have been mistaken in his claim that Mary Anne was from the Annapolis Valley. Certainly he erred in claiming her younger brother Sydney had never lived at Westmorland Point, as Sydney was recorded as a servant in the home of Mary Trueman in 1851. Of Sydney, Trueman notes “the last I heard of him he was a janitor in one of the public buildings” [in the Annapolis Valley]. In fact, Sydney (1830-1909) married Harriet Jane Jackson (1833-1920) and fathered at least two children, John H. Firman (1868-?), and Mary Louisa (November 1871-?). John Firman married another descendent of Westmorland residents, Lalia Martin, who had resided with the family for some time. She later remarried and her son, Percy Edgar Firman (1882-1945), became Percy Simmons. 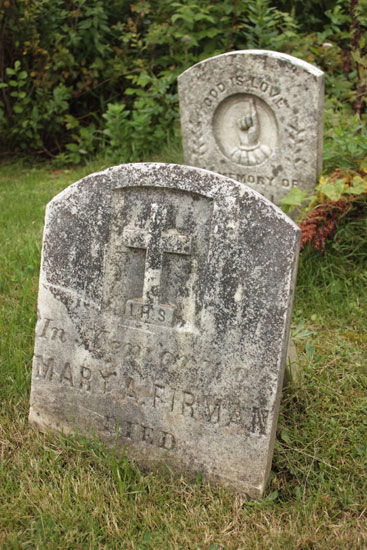 Despite the fact that, like most black Westmorland residents at the time, she in all probability received no formal schooling, Mary Anne Firman still learned to read, and possibly write as well. Trueman’s comment that other black residents found her vain might be borne out by the regularity with which she dissembled about her age to census takers, who appeared not to notice that between 1871 and 1881 Mary Anne, living first with her parents and then her widowed mother, had aged only a year.

That Mary Anne never married may have been less a matter of opportunity and more one of personal choice. At least one other local black woman is remembered as deciding to stay single because marriage would have been a step back economically and socially. Since local black men were generally confined to lower-paying positions, their wives could not afford not to work, and as children arrived the drain on limited family resources became more pronounced. Women who were unmarried and childless might have more financial security long-term. Having said that, in the year preceding her death at the age of 73, Mary Anne was still working as a washerwoman. She was buried November 25, 1902. That she, her parents, and brother all have substantial tombstones in the St. Mark’s Cemetery—in opposition to many of their black neighbors—testifies to their priorities, temporal and spiritual.

How to cite this page