However unintentionally, Cleaveland (bef. 1770?-aft. 1817) embodies the problems of researching early black residents of Westmorland. Purchased by Yorkshire settler Charles Dixon (1730-1817) for sixty pounds (the value of about 480 acres), it seems too coincidental that the enslaved man was named Cleaveland at the time. Instead it is probable that Dixon re-named him after his home in England. While Dixon’s ledger has now been lost, one who consulted it recorded that Cleaveland was purchased in Halifax in the company of two other slaves, one of whom Dixon re-sold to Amos Botsford, the other to Major Richard Wilson. (As Dixon charged the men what he had paid, it seems less that he was trafficking in slaves for profit, than he was purchasing slaves on the behalf of others.) We can date this transaction to sometime before 1776, as oral history recounts that during the Eddy Rebellion Cleaveland assisted Dixon in burying his valuables, with Dixon swearing him to secrecy. 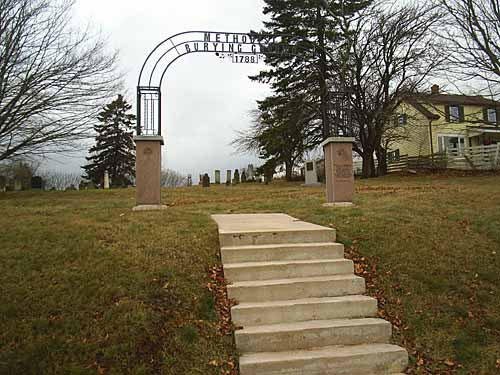 While Cleveland is the only enslaved individual whose name is recorded in Dixon family histories, he was not the only individual to whom they held legal title. Namely, in August of 1793, Major Richard Wilson of Sackville sold a woman, Dinah, to Peter Hall, of Windsor, Nova Scotia “in consideration of the sum of forty pounds.” However, Wilson appeared to retain possession of the woman’s daughter, Violet. Nine months later, in May of 1794, Charles Dixon bought Dinah from Hall, again for forty pounds. In ensuring Dinah’s return to Sackville, Dixon may have effectively re-united her with her daughter, Violet. That Violet was indeed quite young is evident in a confusing series of transactions in which she is sold by Wilson to Peter Hall, who appears to regret his decision after only three days, then returning her in exchange for livestock. The related documents refer to her as a child, and accordingly assign her the low value of eleven pounds. (By contrast, a twelve-year old boy, Abram, was sold in Truro almost two decades earlier for fifty pounds, and another boy in the region a decade earlier for twenty pounds, suggesting that either Violet’s extreme youth or some perceived deficiency reduced her value beyond what her gender would have.) The fate of these women is unknown; nor is it certain if Dinah is the woman of the same name brought to Canada by Titus Knapp in 1783, or the Dinah who resided at Fort Lawrence at the time of her death in March of 1825. Certainly it was not an uncommon name for women enslaved in the Maritimes. However, the fact that the bills of sale for Violet were preserved with her mother’s by the Dixon family suggests that they may have acquired the daughter at a later date.

It is tempting to speculate that Dinah and Violet may have been related to Cleaveland in some ways, but there is no evidence to substantiate this. Nor is it known if Cleaveland is related to other black residents with the last name Dixon. Furthermore, whether the black Dixons acquired the name due to previous ownership by the white Dixon family or a genealogical tie is also undetermined. The earliest identified example of such is Jeptha Dixon, a NB-born black farmer who in 1827 resided in River Phillip, Cumberland. Given that Jeptha had five female residents in his house that year, it seems that he and his wife Phillis (of Massachusetts) were the parents of the Dixon women who would go on to marry into numerous black families in the region, including the Martins, Milligans, and Newtons.

It is recorded by one who knew Cleaveland that Charles Dixon manumitted him, afterwards paying him regular wages. When Dixon died in 1817, before all else he remembered Cleaveland in his will, leaving five pounds in trust to Charles Dixon, Edward Dixon, and Rufus Smith, “to be paid to Cleaveland at their discretion.” Why Dixon did not will the money directly to Cleaveland is not known: it might have been a matter of residual paternalism; it might have been that Cleaveland, as a black man, had fewer rights, and could not defend himself against theft.

Following 1817, it is reported that Cleaveland continued to reside with Charles Dixon’s son, at the family house (since replaced) at the corner of Charles and Crescent Streets in the town of Sackville. Cleaveland apparently expressed a desire to be buried near his former owner, in the local Methodist Burying Ground which Dixon had helped found. In the upper right hand corner of that cemetery is a section which contains “about 8 stone posts, chain gone and no stones.” Cleaveland is believed to be interred there, alongside other black men and women who were enslaved by or in service to prominent members of the early Methodist Church.

How to cite this page