The first identified mention of a Surrey family member is in the will of Thomas Watson of Fort Lawrence, who in 1796 bequeathed to his daughter the finer household goods (silverware, china) “together with the Negro girl called Sarah.” Sarah, who was born in the province about 1794 (died after 1881), would have been about two years old at the time. It is known that Sarah would come to be known as Sarah or Sally Surrey, after marrying William Surry (abt. 1789- 1869), also New Brunswick-born. Together, they worked for the Trueman family in Mount Whatley, and raised at least ten children. Where William Surrey came from is unknown, though it seems possible he was the son of one Charlotte Surrey (abt. 1774-1832), buried at Mount Whatley. (Given the patterns of naming in the community, it also suggests that Charlotte Martin, who resided with the Surreys in 1851, could have been his sister.)

Among Sally and William’s children was another William Surrey (abt. 1814-1853) who married yet another Charlotte (abt. 1816-?). Charlotte and William II likewise named their son, born about 1850, William. That would make William Surrey III, featured in the accompanying document, about seven years old when his mother bound him to at least seven years of servitude, possibly as many as fourteen. Four years later he was living with the Trueman family as a servant, alongside another black man, John Tracy (abt. 1838-?), a farm laborer who would go on to marry Lucy Surrey. By 1871, William was twenty years old, and residing with the Bliss family next door to the Truemans. Importantly, he was recorded as able to read and write, meaning he had received the promised schooling. He disappears from the Canadian records after that time, and it seems he followed his cousin (Bedford Reid Surrey) to Boston, as a William H. Surrey, identified as black and born in Canada of Canadian parents, appears in later Boston directories and censuses, noting his date of immigration as 1875. Also included is his wife, Sadie R., a dressmaker, and son, William Ernest Surrey (1893-aft. 1934), who would go on to serve in World War I.

Charlotte Surrey’s choice may seem questionable today, until one considers the reality of her situation; her husband had died in 1853, and she had a newborn at home, Charles (Nov. 9, 1852-aft 1901). Charles would also be in service at the age of seven, perhaps as the result of a similar agreement. Charlotte may have had concerns about her own health or her ability to support her children; certainly she disappears from the census after this time (unless she is the Charlotte who marries William's brother). While records suggest William purchased land in November 1845, it is not known if it was cleared. And if he had borrowed money to obtain he land with the expectation of cultivating it in order to repay a loan, this would have posed yet another problem for the young widow. Indentureship was a reality of nineteenth-century life, for impoverished whites and blacks alike.

Thus, in entering into such an agreement, Charlotte may have been anticipating the inevitable and trying to secure the best possible terms for her son. Note for instance, the case of Mary Walker, in nearby Dorchester, whose mother (possibly the widowed Rose Walker, born 1797 in Nova Scotia) was unable to support her in 1837. In this case, ten-year-old Mary was bound into an eight-year indentureship by the Dorchester overseers of the poor. Whereas William Surrey could expect an education, clothes, and twenty pounds, Mary was guaranteed clothing and instruction “in the Art of domestic Housekeeping.” While Trueman “pledges himself to use the said William Surry well and to see that is used well and that he is religiously instructed” Mary’s contract instructed that she “shall well and truly serve the said Gideon Smith” and “shall humbly and obediently demean herself toward the said Master and his family.”

In part, the difference in wording could reflect the twenty year lapse between the two agreements; it might be a regional difference; it could be that the Truemans, accustomed to having help live on-site did not feel the need to assert such authority, whereas the Smiths were unaccustomed to live-in servants, as their census reports demonstrate. Or it could really be that William’s contract was negotiated by his mother, whose family and community had long-term ties to the Truemans. By contrast, Mary Walker’s mother had only been in the area a year, and was less likely to have established ties with interested individuals who would monitor her treatment. If Mary’s mother was Rose, she was still alive in 1881. By contrast, it is not clear if Mary survived to adulthood; another woman by that name did. 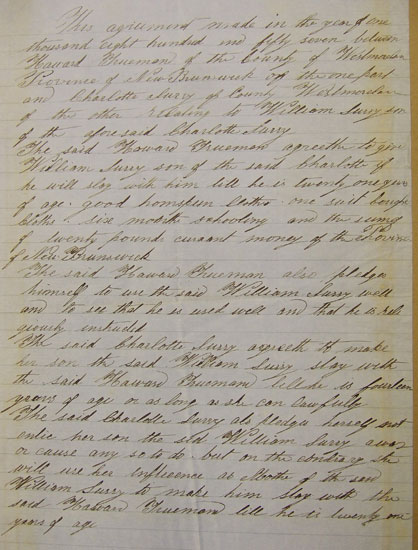 Mount Allison University Archives, Truman family fonds, accession no. 0102/4. May only be reproduced with permission of the MtA Archives.