When French Acadian settlers arrived on the marshes in 1672, they heard the sound of tidal waters rushing up the marsh channels responding to the 13 meter tidal range of the Bay of Fundy. The Acadians were also struck by the noise of the abundant migratory waterfowl. The combination of these distinctive sounds led them to name the marshes `Tintamarre', translated as a place of cacophonous din. It is also known that the French settlers at Annapolis had implemented dyking techniques similar to those used in the areas of western France from where they had come.  As these Acadian settlers and their descendants spread to Cobequid and into the Minas Basin and later initiated new agricultural settlement at the mouths of the Tantramar, Aulac, and Missiguash Rivers, they naturally introduced this technique to these marshes as well. The agricultural productivity of the reclaimed marshes soon led to a thriving trade in cattle and other agricultural products with the region’s fishing settlements at Le Havre, Canso, and Louisbourg, and externally with New France and New England.

As in other Acadian-settled areas of the region, a scattered series of small hamlets eventually emerged, most of which were located on higher ground either on the ridges or on “islands” that stood above the areas prone to flooding. Acadian farmers necessarily devoted much effort to creating and maintaining the dykes that served to protect their fields and pastures. Particularly crucial in this technique were the aboiteaux or sluice gates that were installed where the rivers crossed the dykes. The aboiteau (aboideau) was a wooden outflow with a form of clapper gate hung vertically so as to open under the flow pressure of the fresh water from upstream, but shut tight against a sill when the tidal flood surged up the river or creek, thereby preventing the salt water from flowing above the dyke. The purpose of this technology was to allow the salinity of the marshes to be progressively reduced so that European crops and grasses could be grown.

The French hold on the region was tenuous following the Treaty of Utrecht in 1713 which granted much of Nova Scotia to the British. The Isthmus of Chignecto, with its position at the head of the Bay of Fundy, formed one of a series of uneasy frontiers in the contest between the French and the English for control of the region. For the Acadians living on or near the Marshes, these events formed an unwanted intrusion on the demands of everyday life. Their preoccupation was with the maintenance and extension of their marsh agriculture and with trade that was as much dependent upon markets in Boston as it was with supplying the French colonial bastion at Louisbourg.

In Nova Scotia an uneasy stalemate between the British and French prevailed. The first fall of the French fortress of Louisbourg in 1745 and subsequent troop movement through the Chignecto region increased suspicion about the loyalty of the Acadian population. The Treaty of Aix-la-Chapelle in 1748, while restoring Isle St. Jean (present day Prince Edward Island), Isle Royale (Cape Breton Island), and Louisbourg to French control, also paved the way for increased British settlement of peninsular Nova Scotia and forced Acadians unwilling to take the oath of allegiance to the British Crown to resettle in French territory west of the Missaguash River at Chignecto. These geopolitical events led the French authorities to build two defensive positions: Fort Gaspereaux on the Northumberland side of the Chignecto isthmus and the larger Fort Beausejour on the Fundy side, both operational by 1755. At about the same time the British authorities constructed Fort Lawrence on an adjacent ridge so that these two defensive positions faced each other in the middle of the marsh.

In 1750 Abbé Le Loutre, who had arrived in the region as a Catholic priest to the Mi'kmaq and who had assumed control of the local area, ordered the destruction of the village of Beaubassin in an effort to drive the Acadian population into French territory. The refugee Acadian population in the Tantramar area was reluctant to provide military service to the French garrison at Fort Beausejour, preferring to maintain neutrality. Indeed, when the fort was eventually captured by a British force from adjacent Fort Lawrence, the capitulation of the French force was in part the result of pressure from Acadians within the fortress who threatened to turn their arms against the French garrison unless it surrendered. The climax came in June of 1755 with the British launching the assault on Fort Beausejour by marshalling forces from Fort Lawrence with those landed from a fleet of some 37 ships. The attack came after the British established a bridgehead on the Missaguash north of Fort Beausejour near Point à Buot, which later became the hamlet of Point de Bute. Over several days they secured the site. After meeting only token resistence, they commenced lobbing bombs at Fort Beausejour inducing the French to capitulate and ending the French colonial presence in Chignecto.

For the Acadians the consequences were drastic. Their choices were to escape into the hinterland or suffer deportation by the British. Almost all Acadian settlements in and around the Marshes were burned to the ground either by the British or by the Acadians themselves. Consequently, little physical evidence remains to allow us to capture an image of Acadian settlement except for the modern dykes, many of which probably stand where Acadians had constructed theirs. 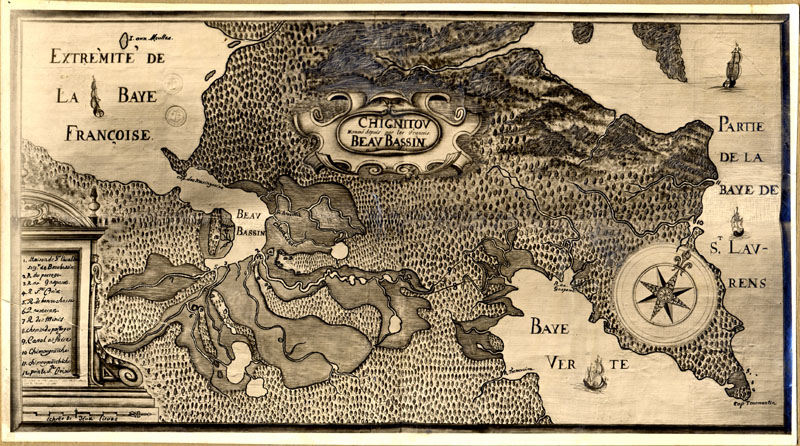 European interest and mapping of the Chignecto region gathered momentum in the later decades of the seventeenth century and led to the beginning of European settlement. In 1671 Jacques Bourgeois with two sons, three sons-in-law and their families arrived on the Chignecto Isthmus from Port Royal and established the settlement of Beaubassin east of the Missaguash River, on the edge of the Fort Lawrence ridge. Four years later Michel Le Neuf de La Vallèlire was granted rights to the "Beaubassin Seigneury” and established his settlement west of the Missaguash River on a small raised area in the marsh known later as Tonge's Island. By 1686 a colony of 127 people had extended settlement onto the Tantramar marshlands, a church had been built beside the Tantramar River, cattle, sheep and pigs were being grazed, and land was cultivated.

Growth was slowed by the departure of La Vallière and his settlers in the early 1694s. Then Beaubassin was attacked twice (1696 and 1704) by British forces in retaliation for Indian raids in New England. Despite these setbacks and a general crop failure in 1699, the Acadian population developed their trading relations with New England and tried to avoid aligning themselves with either the French or British interests in the region. 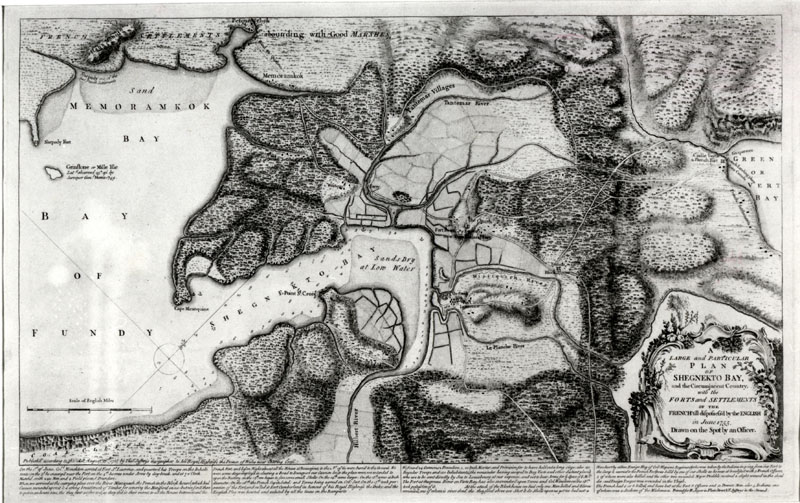 This map or plan depicts the broader geographic setting of the Tantramar area with an emphasis on the marshes and the settlements located on or adjacent to them. Among the outlying settlements are an Indian village near the present-day site of the Fort Folly Mi’Kmaq Reserve (Dorchester), the Acadian villages at Westqua (Westcock), Memoramkok (Memramcook) and at Tantemar (Middle Sackville). Also shown are the two French forts: Fort Gaspereau on the extreme right side of the plan on “Green or Vert Bay” and at Fort Beausejour. Note the French Blockhouse that was associated with the latter at a point near what would come to be called “Bloody Bridge.”

Particularly interesting is the separation of marsh and upland shown by the graphic rendering of different surface texture or vegetation. Also evident is the large expanse of the upper Cumberland Basin, here called Shegnekto Bay, which shows the segment that revealed itself as “Sands Dry at Low Water.” The very fine writing forming the text along the bottom of the plan describes in detail the British attack on Fort Beausejour. 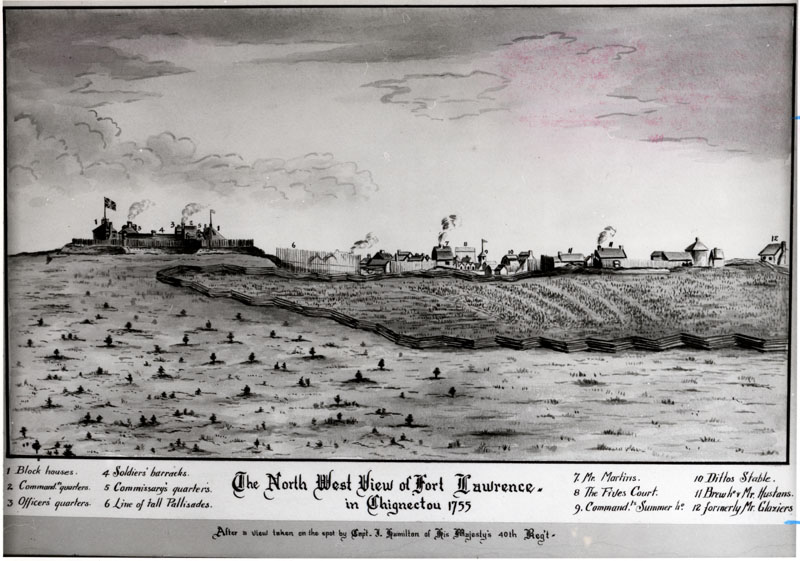 Evidently a copy of a drawing by Captain J. Hamilton of His Majesty’s 40th Regiment, the scene depicts Fort Lawrence and the adjacent settlement. The latter contained at least 29 buildings, among which was the Commandant’s summer house, a brew house, stable, and the “Fives Court,” used to play a form of handball popular among upper class British gentry. Also of interest is the depiction of the foreground, which consists of a large field enclosed by snake rail fencing, but which seems to be divided into ploughed land and pasture. The zone beyond is notable for the scrubby vegetation, and suggests that the trees that once occupied this area may have been cut down in order to maintain sight lines for the security and defense of the Fort. It was from this base that the British launched their assault on the nearby Fort Beausejour in June of 1755. 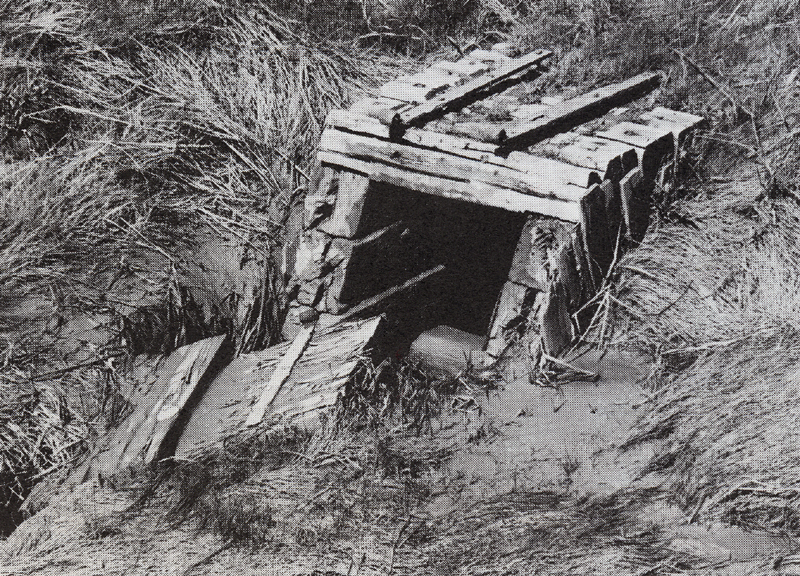 This photo which was taken in the 1970s shows the form of an aboiteau that although probably built in the twentieth century, retains the essential features of the Acadian structure. Note the “wooden box” through which the water passed and the “clapper gate” now broken off.