Following the deportation and flight of the Acadian population in 1755, New England-born and then English settlers were encouraged by the British authorities to resettle the marsh and the adjacent uplands. The intent was not only to ensure the continuity of settlement at a strategic point on the Chignecto Isthmus, but also to maintain the agricultural production needed to both supply the colony and the trade connections to neighbouring regions. Considerable debate exists among scholars as to whether these new settlers had the skills and motivation to maintain the existing dyked lands created by the Acadians. Many of the earliest of these settlers were families who gained land as a reward for military service at Fort Lawrence, supplemented by a “small colony” of Rhode Island Baptists who arrived in 1761 in response to the Governor’s effort to portray the bountiful opportunities of the region. These `Planters' who were predominantly from New England set about dividing up the land, applying the land allocation principles of their New England source region. They imposed a cadastral or survey pattern that remains to the present day, as it does in other Bay of Fundy areas settled by New England Planters, such as at Horton and Cornwallis in the upper Annapolis Valley. Yet these groups ultimately lacked the capital and resolve to establish themselves. They also faced a regional economy of uncertain markets, small urban centres, and unreliable transport systems. Many soon went back to more familiar and more promising opportunities on the settlement frontier of the New England colonies. The departure and absenteeism of the initial New England land recipients led the authorities to search for other groups who might be more committed to settlement in this location and thereby achieve the goal of preserving the agricultural potential the marshes offered. Between 1772 and 1774 the authorities successfully induced a group of approximately 1,000 Yorkshire Methodists to emigrate to the region. These were people who were seeking relief from rising rents and religious tension in their homeland. Because they brought a little capital, they proved more persistent in their determination to make a life in and around the Tantramar Marshes.

A further immigrant group affecting the Tantramar in this era consisted of Loyalists forced into exile from the newly-created United States after the War of Independence. While the largest flow of Loyalists to the region located first in Saint John and at Shelburne in Nova Scotia, some eventually made their new homes in the Tantramar region. Some thirty-three families of Loyalist origin arrived in the area during 1785 and 1786, assisted by British government policies that provided free grants of land and subsidies for agricultural implements. This influx of people to the Tantramar was significant because of the increase in market demand it created thereby stimulating agricultural production and other enterprises, and for the presence of families such as the Botsfords who were to rise to prominence in the provincial judiciary and politics in later years.

Overall, the efforts of these English-speaking residents in the Tantramar brought only fluctuating fortunes through the latter decades of the eighteenth century. However, this period saw the laying down of the broad legal template of land distribution and ownership, and the institutional means of ensuring that the dykes were secured and maintained. Notable in this period were high rates of land sales as residents repositioned themselves and assembled larger, more cohesive marsh holdings as part of their agricultural system. As a result of a process of land exchanges and acquisitions, some individuals and kin-related groups were able to amass sizeable and complex holdings. This ensured that the local society was one marked by a clear hierarchy of prosperity and influence.

Agriculture remained the dominant activity in the early decades of the nineteenth century, but lumbering, shipbuilding, milling, tanning, grindstone quarrying, and other industries began to develop in the Tantramar region also. The forested uplands were pushed back as demand for timber increased, driven in part by the blockades of the Napoleonic Wars restricting supply of timber to Britain from the Baltic. In addition, the Tantramar region saw a progressive concentration of commercial and industrial enterprise in the rapidly-growing towns of Sackville and Amherst, which by the 1840s had become the central places for the region.

The New England form of land division was one that derived from earlier English practices. At the heart of the approach was the effort to distribute parcels of each type of land, i.e., arable or crop land, pasture or meadow, and upland or woodland to landholders so that their subsistence needs from these diverse resources could be met. This system had its origins in the Western European medieval open field manorial holdings where peasants might be allotted a number of strips, or furlongs, in a commonly worked open field and where they might share common grazing and other land resources. Many of the earliest Puritan settlers to New England who originated from the counties of Essex and Suffolk where open field farming had predominated were familiar with this type of settlement system. Perhaps for this reason these approaches were reproduced by the authorities charged with creating the early colonial enterprise around Massachusetts Bay, even though social and economic changes were already starting to transform England’s manorial holdings though a process of land reform known as the enclosure movement. In England enclosure led in time to the creation of unified individual farm units with the farmer living on his own holding rather than in a farm village. Ironically this same process of land reform was already underway in New England at the very time that British settlements were being initiated at Chignecto and elsewhere in Nova Scotia in the 1760s. These Nova Scotia Planter settlements were perpetuating what can only be described as an obsolete system on the lands that they were taking over from the Acadians. The result was that these efforts imposed on the Tantramar an archaic system of fragmented land parcels in each of the major marsh units thrown open to settlers. Moreover, the low elevations and proneness to flooding ensured that farmsteads would be located on the ridges and intervales that rose above the marshes themselves. This meant that farm settlement tended to be semi-nucleated in that farmers were clustered loosely on this higher ground or were strung out along roads in a kind of street village form reminiscent of many similar rural settlements in Europe. As such, farmers inevitably had to walk out to their scattered holdings, a requirement that consumed a great deal of unproductive time. On the other hand, it is arguably the case that the fragmented nature of this system pushed farmers into cooperative solutions with respect to the labour needed to maintain roads, dykes and aboiteaux. 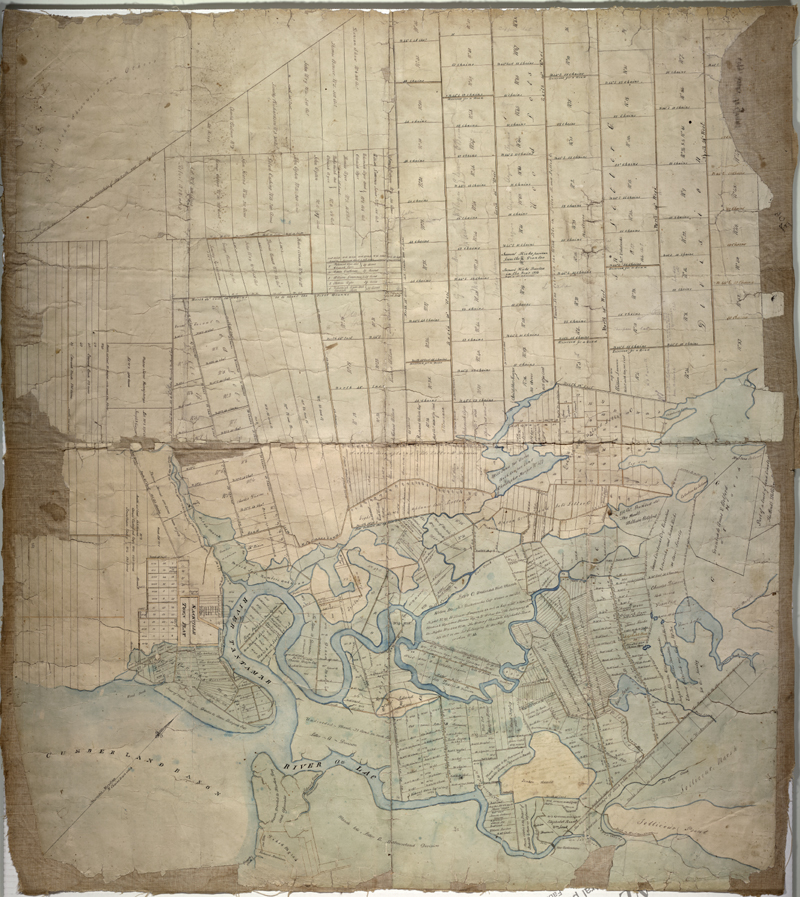 The following deeds and the larger land record reveal that farmers sought to undo the fragmented nature of their land holdings in an effort to produce larger consolidated holdings where effort and outcomes could be concentrated more efficiently. This process of land consolidation could only be achieved within the conventions of the legal system which meant that lands had to be bought and sold, a cumbersome and expensive process though no doubt a boon to lawyers. In the sequence of documents that follows Yorkshire immigrant Thomas Anderson acquires land from various parties both resident and absentee. This process spanned some two decades and extended to the next generation. In one instance Anderson was joined by his relative John Paterson to acquire a parcel of land “containing twenty one acres laying in the Ramspasture Marsh...” from Robert Foster, who was described as being from the Commonwealth of Massachusetts. In another document a few years later, Charles Dixon conveys to Anderson “for the sum of one hundred and eighty pounds currency... certain Tracts of land in the Lower Mill Creek, as follows, sixty eight acres of Marsh land more or less along said creek, and also four lotts [sic] of Wood Land in the first tier of Lotts known by number one, number two, number six and number seven, containing four hundred acres more or less, and bounded on the Division line between A and B in Sackville.” 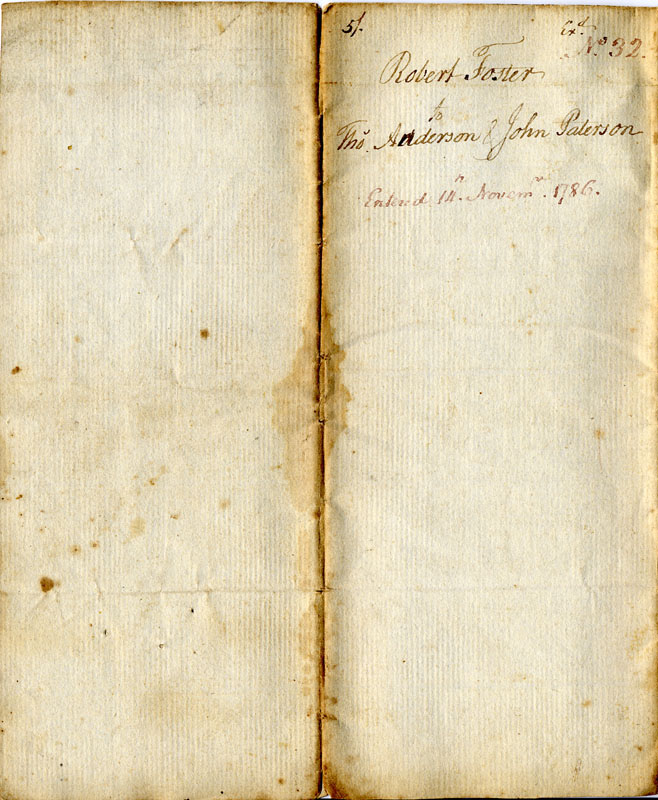 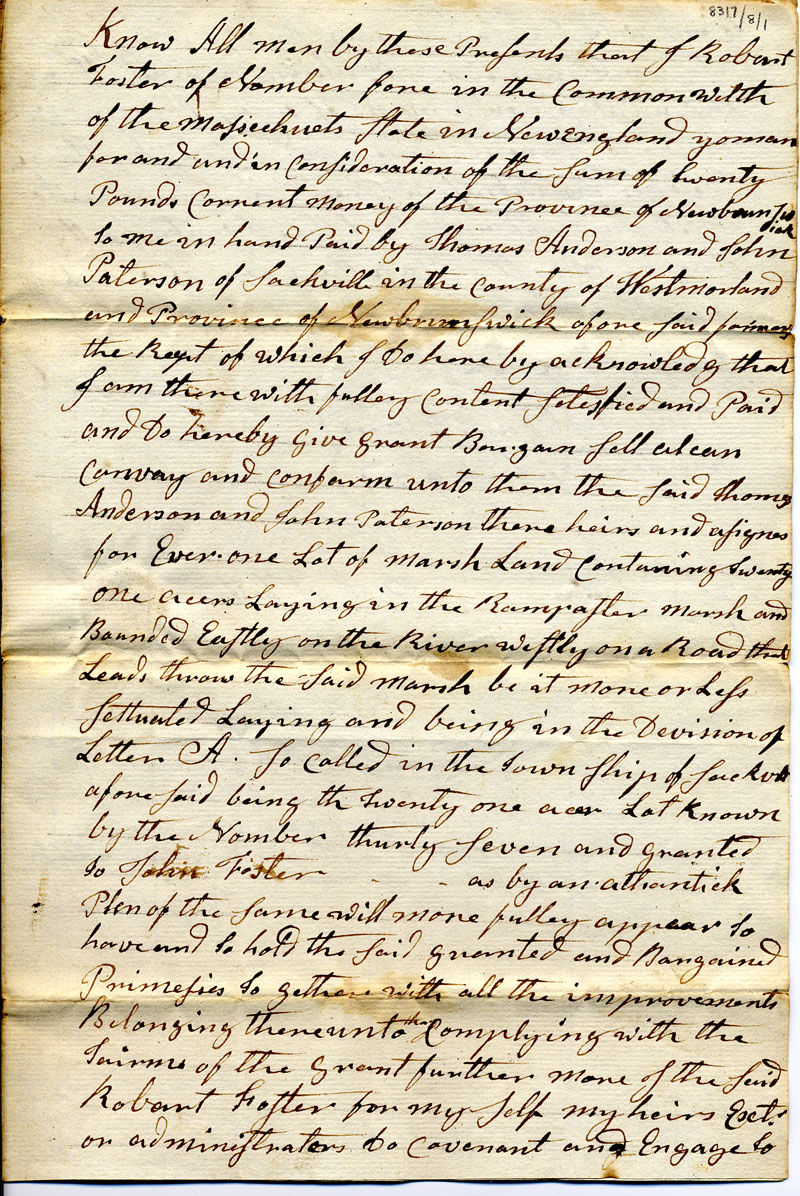 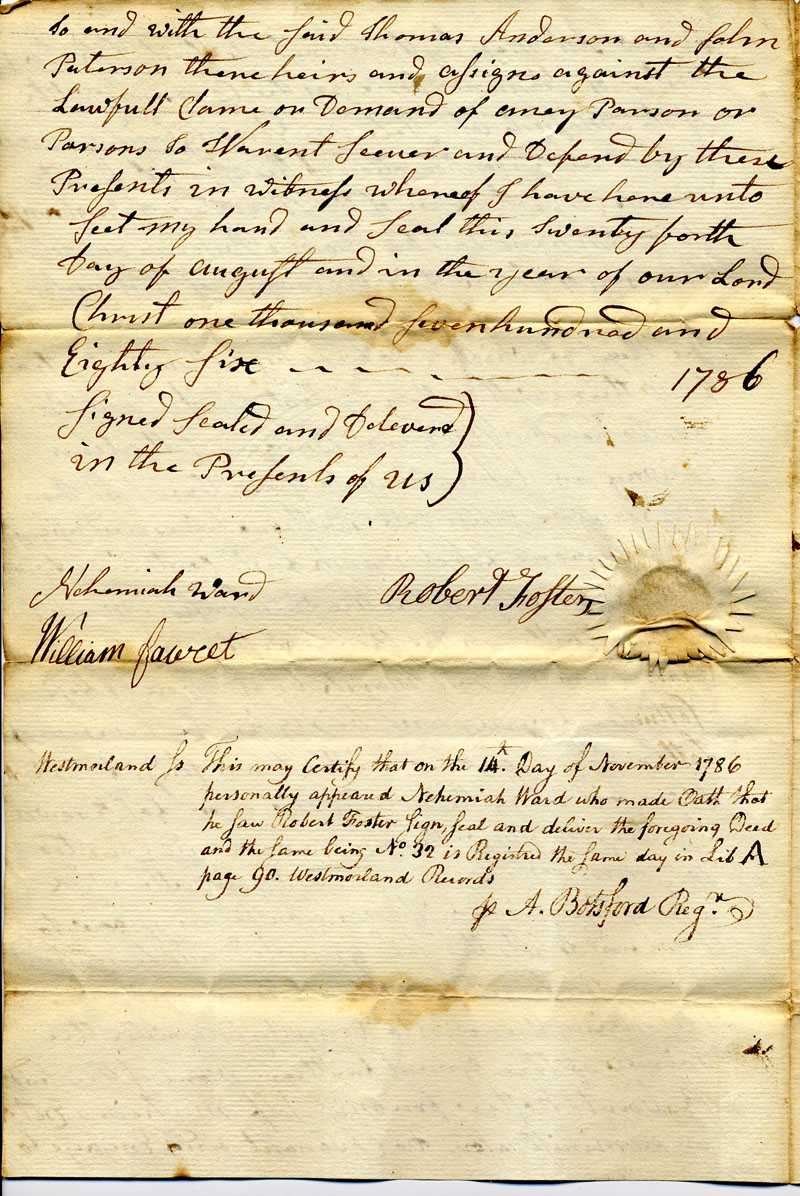 To see all deeds in this series, please click on the documents below.

In placing English-speaking settlers on former Acadian lands, authorities assumed that the Tantramar would again become an important source of vital agricultural commodities needed to supply the wider region. It is important to note that much of Maritime Canada offered thin rocky and acidic soils and a short growing season. This meant that a broadly based and productive agricultural economy would only emerge in a few areas of the region in spite of the best efforts of settlers. Agricultural development took on a greater importance in those few districts where nature provided a comparative advantage. The Acadian presence before 1755 had demonstrated that the Tantramar Marshes with their deep rich soils could be one of these productive districts and as the eighteenth century gave way to the 19th, those who settled this area were principally engaged in developing a productive agricultural economy and community. Settlers at this location enjoyed one great benefit not generally available to others in the region or in other British North American colonies: they did not have to clear the land of forest. Thus they had immediate and easy access to a land resource, one which had been enhanced by Acadian dyking. But they did not have easy access to markets, nor was there a significant urban centre. Consequently, issues of transportation to Halifax, Saint John, and other parts of New Brunswick would pose challenges until shipping connections could be developed through a port at Sackville and the building of the Intercolonial Railway late in the nineteenth century. Nevertheless, as settlers became farmers and as the process of learning about the nuances of the marsh environment unfolded little by little a form of commercial agriculture emerged. By the end of the nineteenth century Westmorland County was among the largest producers of agricultural produce in the Maritime region, and this output came principally from the Tantramar Marshes. In this section we explore some of the steps leading to the formation of this vibrant agricultural community.