The concentration of ownership on the Tantramar Marshes also affected the process of dyke and drainage (sewer) maintenance. By 1835 land ownership was most concentrated in the Dixon's Island and West of Cole's Island marsh bodies where between one quarter and one third of the proprietors owned approximately 60% of the marsh. Ownership was less concentrated in the East of Sunken Island and Bear Island/Middle Village marshes, but even here the top four proprietors owned over 50% of the marshland. The pattern of ownership on the large Great Marsh showed relatively little concentration, although the four largest proprietors owned in excess of 20% of the land and one landowner held 10%.

Analysis of land ownership is significant in part because it was the intention of the 1760 legislation establishing the Commission of Sewers that those elected be from the group of proprietors of each marsh body. One might expect that those owning the highest proportion of land would be most interested in influencing the spending of their neighbours' labour and materials on drainage and dyking works that would benefit their large holdings. To some extent this is borne out by the evidence. Tolar Thompson owned approximately 10% of the Great Marsh and was elected Commissioner for 1830-1835. William Botsford, a descendant of the Loyalist settler Amos Botsford and the largest landowner of the Westcock Marsh, was the Commissioner. There is also considerable evidence to suggest that Commissioners of Sewers were being elected who did not own any part of a marsh body.

By the mid-nineteenth century agricultural intensification of the 10,000 hectares (25,000 acres) of productive marsh was in full swing with a focus on the production of grains, root crops, and marsh hay. Through this era the marsh landscape was transformed by extensive new drainage, ditching and dyking works. Native vegetation was replaced by imported species and the natural saltmarsh was progressively enclosed behind high dykes that ran along the banks of the three main rivers and along the coast line between the river outflows.

The heart of this agriculture was a marsh hay economy which relied not only on the particular physical resources of the Tantramar Marshes but also the particular forms of economic, political and social organization that enabled farmers to improve the land for this type of agriculture. To understand this habitat and its settlement history, it is essential to examine the emergence of local political structures such as the sewer districts established to regulate and control the marshes for farming under the direction of the political body known as the Commissioners of Sewers. At the heart of this system was the requirement that local farmers perform annual labour on the ditches, drains, and dykes in order to keep the complex system operating effectively. The records of these labour requirements reveal much about the nature of local community dynamics in the intensification of marsh agriculture. 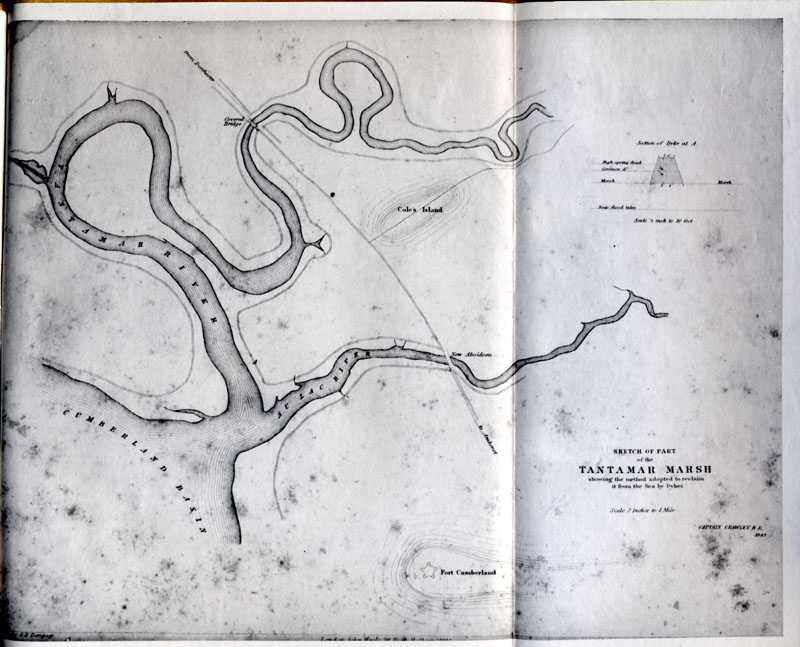 This small pamphlet was undoubtedly produced in the context of Crawley’s role as a member of the Corps of Royal Engineers and represents his description and record of the aboiteau techniques still being used on the marsh in the mid-nineteenth century. Crawley’s map and technical drawing, dated 1843, depicts the principal geographic features of the marsh from Fort Cumberland westward to the edge of the present-day Town of Sackville, which at the time had yet to emerge as the dominant commercial centre among the straggling settlements stretching along the upland ridge toward Upper Sackville.

Extending the reclaimed area of the marsh

The development of a healthy marsh economy that would sustain its residents into the twentieth century depended not simply on the technical capability to extend the area under agriculture but also on building links between farmers and wider markets. Marsh agriculture expanded dramatically throughout the Gulf of Maine and the Bay of Fundy regions in the late eighteenth and nineteenth centuries, creating a hay economy that fed horses and oxen along the eastern seaboard, primarily in cities, mines, and in lumbering operations of this broader region. By 1921 nearly three-quarters of the total available field-crop acreage in the two Parishes that encompass the Tantramar Marshes, Westmorland and Sackville, consisted of hay.

The nineteenth century agricultural landscape continued to be based on marshland but substantial improvements in drainage techniques and rising demand for marsh hay fostered expansion in this sector. Two areas of marshland in particular saw dramatic improvements in the nineteenth century. The first of these was the body of marsh between the Tantramar and Aulac rivers closest to the sea. While dyking on the edges of these rivers had occurred, it was not until two aboiteaux were constructed on the Aulac River that drainage could be properly controlled in the salt marsh between it and the Tantramar. The second area of new development was northwards on the marsh into a region of deep bog and lakes. Because the marshland slopes northwards away from the coastal margin (a product of centuries of tidal sediment deposition), the northernmost portion of the marsh towards Midgic and Jolicure is poorly drained. In 1815 Tolar Thompson, now a legendary marshland figure, began construction of a canal from the Tantramar River northward into the bog. Cutting through about three metres of peat moss, this canal progressively drained and expanded the available productive marshland, while nutrient-rich mud carried up the Tantramar River on the incoming tide was deposited in the smaller drainage ditches feeding the main canal.

Management of the marshes: Commission of Sewers

The ‘sewers’ were the ditches used to drain water from the marsh especially after it had been enclosed by dykes. The task of the Commissioners of Sewers was to manage building and maintenance of sewers and dykes. Legislation providing for the appointment of Commissioners of Sewers dates from 1760 in Nova Scotia (which at that time included present day New Brunswick). Initially operating through the Court of General Session which regulated a variety of local affairs such as road building, fence-viewing, and fence regulations as well as dealing with civil suits, Commissioners of Sewers were able to impose levies on land owners at rates set by the General Session. These rates were to be paid in ‘work, wheat or butter,' for the reclamation of marshland and the building and repair of ditches and dykes. The micro-scale geographies of the activities of the Commissioners of Sewers in the late eighteenth and nineteenth centuries were a key means of intensifying agricultural production on the Tantramar Marshes. Marsh hay was an increasingly valuable product with an expanding market, particularly throughout the nineteenth century. The documents selected here demonstrate the way in which the management of the marshes brought together the pursuit of individual economic gain with a strategy of collective action whereby the whole agricultural community benefitted. 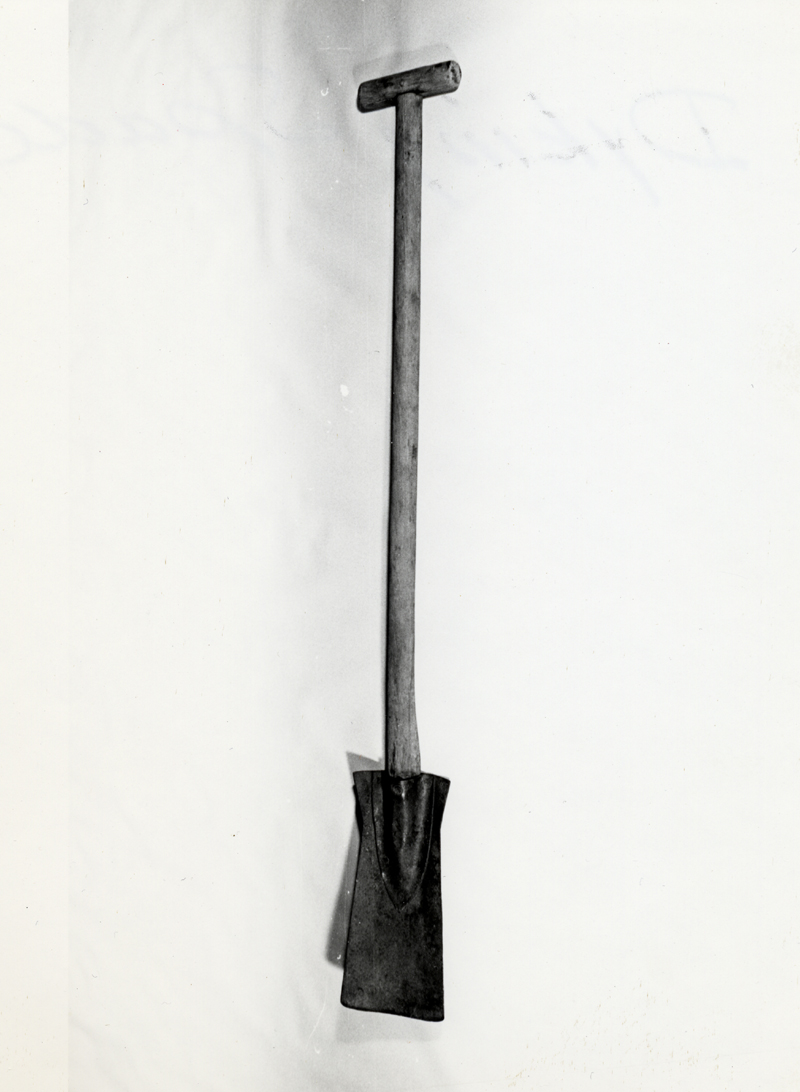 An essential tool in the maintenance of marsh sewers, the dyking spade was an implement made by local blacksmiths. This example, which has no provenance, may have been made by Charles A.D. Siddall, who was well known for making these tools.

Since markets for the hay harvested on the marshes were largely external, shippers and transportation connections played a crucial role in ensuring that the local economy remained dynamic. Local merchants who had begun to deal in the sale of agricultural produce recognized the value of having good shipping connections and by the mid-1840s had been active in the construction of a public wharf on the Tantramar River. In 1847 local merchants petitioned the provincial legislature seeking "free port" status for Sackville to improve its competitive position for importing, exporting and distributing goods in the region. Through much of the second half of the nineteenth century the port of Sackville provided one means for goods to move into the coastal shipping system. In spite of the significant tidal range which left vessels perched on the mud at low tide, small schooners and scows were able to navigate up the Tantramar River to the port of Sackville. These vessels, many of which were constructed in local shipyards, connected with larger regional ports such as Saint John, delivering hay and other agricultural products to a larger seaboard supply stream. The coming of the Intercolonial Railway in 1872, passing through Sackville and Amherst as it crossed the marsh, provided a new and more regularly scheduled means for moving goods. In time the railway’s superiority as a regional and inter-regional carrier led to the decline of the Port of Sackville. The final blow came in the period from 1913 to 1922 when the inevitable effects of unrelieved siltation and storm damage caused the course of the river to be so altered that ships could no longer reach Sackville’s wharf. Thereafter the railway and a progressively improved regional highway system provided transportation services for the local economy. Not surprisingly, shippers such as the Sackville Hay and Feed Company, founded in 1903 and expanded in 1913 to become the Eastern Hay and Feed Company, located their operations alongside the railway in Sackville and Amherst. There were also depots strategically placed at points such as Aulac between Sackville and Amherst so that farmers did not need to haul their hay to town.

The 1861 agricultural census records the major agricultural products of the Tantramar Marshes. The greatest acreage was in hay, nearly six times the acreage of the next ranked product, oats. Other cultivated products in descending order of importance included potatoes, buckwheat, barley, wheat, turnips and rye. Significantly, many of these crops supported considerable livestock production with beef cattle, sheep, oxen, horses and dairy cows. Sixty years later the hay economy of the Tantramar region was at its height. The 1921 census shows a similar pattern of dominance with hay production making up 72 per cent of the total available field crop acreage, oats a distant second followed by potatoes and turnips.