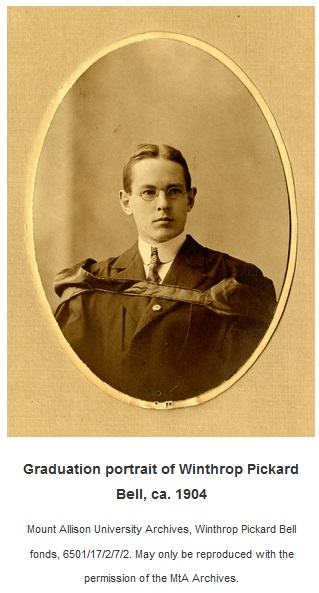 Winthrop Bell began his studies in the public schools of Halifax, Nova Scotia. There are references to his attending the old Albro Street School before he entered the Halifax County Academy in 1896 at age twelve. While in attendance there he was required to participate in the cadets and related stories of drills including the following reminiscence:

"The Halifax Academy Cadets were mustered at the beginning of the school year, we were marched up to that building (on the south side of May Street) on the first Saturday afternoon, and were there issued with the heavy old-fashioned rifles with which we drilled. We then had to march, with our rifles to the old drill hall on Spring Garden Road." [1]

Bell graduated from the Halifax Academy in 1900 and was described as follows in the institution's year-end publication:

"Winthrop Bell was the orator of his class. It was sometimes doubtful who was the real teacher in the English room. His high aggregate (over 900) shows he knew his books well, particularly his classics for which he won the medal. He is now starting his college career at Mount Allison." [2]

In High School Bell won the Mayor's Medal for highest academic standing in Classics. During his freshman year at the University of Mount Allison College, as the university was then known, he continued to study the Classics including: Latin, Greek, and Roman History. He began studying German during the 1901-02 academic year and continued to do so until he graduated in 1904 with a Bachelor of Arts with Honours in Mathematics.

He attended summer school in 1904 at Cornell University in Ithaca, New York. In the fall of that same year he attended McGill University in Montreal, Quebec and studied in the faculty of Engineering under Professor Ernest Rutherford, the 1908 Nobel Laureate in Physics.  He finished second in his year. He then took a year off to undertake surveying work for the Halifax and South West Railway in the Sable River area of Nova Scotia.

Bell returned to Mount Allison in the fall of 1906 and completed work on a Master's degree which focused primarily on history, German, and philosophy. His thesis was entitled "The Defence of Europe" and examined "the record of the salvation of the European nations from Oriental conquest and domination, during the formative period of their civilization." [3]

He graduated on May 28, 1907, and his formal education at Mount Allison concluded.

During the fall of 1907 and spring of 1908, Winthrop Bell returned to surveying work and was this time employed with the Trans-Continental Railway working primarily in Northern Ontario. However, he continued to express an interest in furthering his studies and later wrote.

"The material basis for many of the greatest satisfactions I have been able to have in life was provided by a gift from my mother; while later an inheritance from my father was the foundation for anything I have been able to add to it ... When, in 1908, I was working in Northern Ontario as a surveyor, saving money for postgraduate study, my mother wrote me that half of her little inheritance would ultimately be designed for me; that she did not need it in the meantime; and that she and my father thought it would be much the best, as I was already 24 years old, if I used the money in the next few years for the study I wanted to pursue." [4]

This promise of financial support led Winthrop Bell to apply to Harvard University to complete his Master of Arts in Philosophy. His admittance letter dated September 14, 1908, indicated that the only special condition that he needed to fulfill was a course in French. While at Harvard he studied under Prof. Josiah Royce, an experience which would be of great importance as his education continued. Bell graduated from Harvard in 1909 and later that year set out to continue his studies in England. 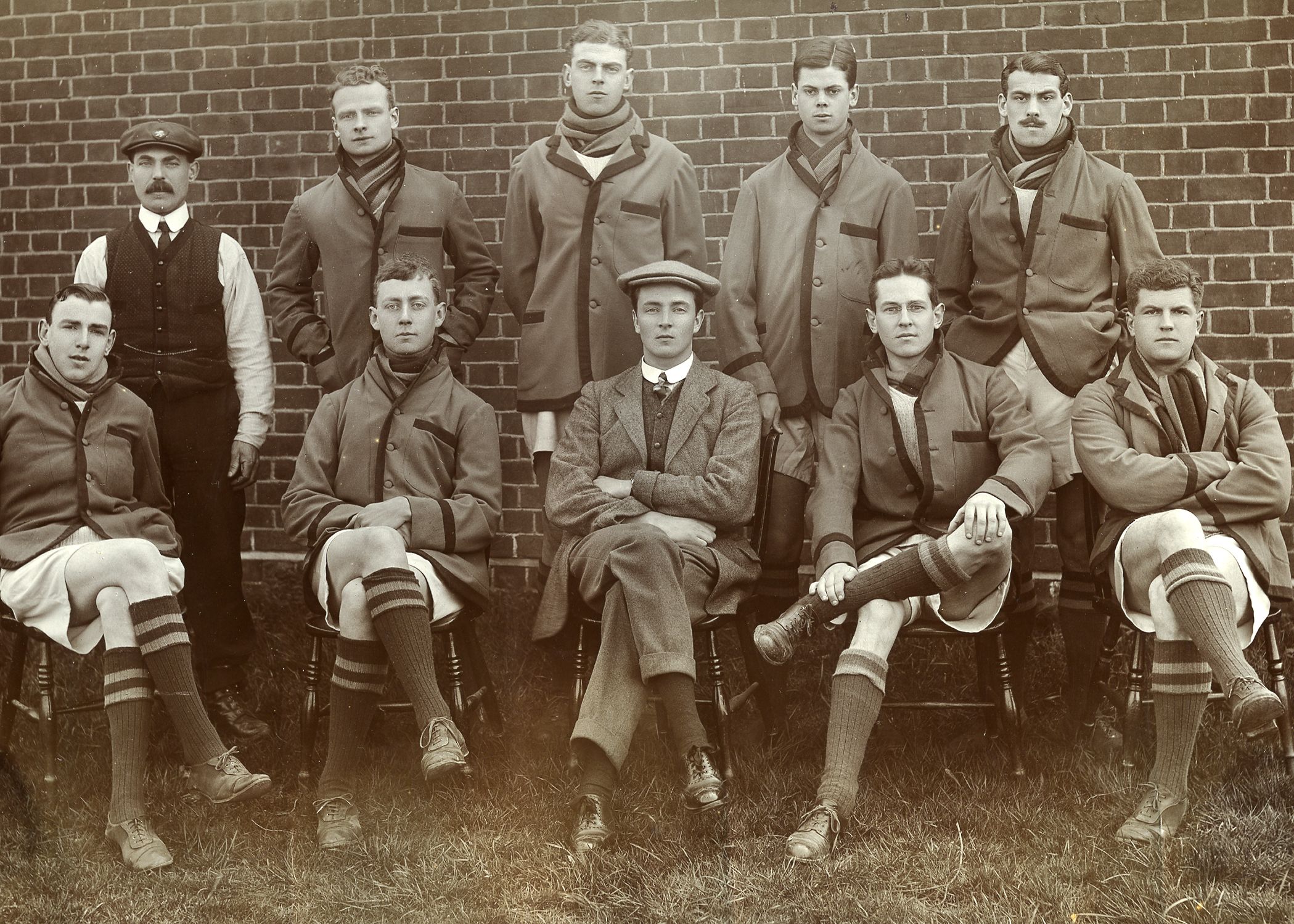 Winthrop Bell's Cambridge rowing crew (Winthrop Bell is in the front row - second from the right), circa 1909-1910

Winthrop Bell arrived in Liverpool, England, on September 28, 1909, and very quickly became involved in the English university tradition of rowing. Bell attended lectures in October at Emmanuel College, Cambridge University, but unfortunately by the end of November had developed a bad cough. Over several months his health deteriorated and he was operated on for pleurisy on March 8, 1910.

His health improved but it was suggested that a continental climate might be more conducive to recovery so he made arrangements to go to Germany to recuperate and prepare for further studies. During the fall of 1910 he studied under Professors Richter, Volkelt, Brahn, Wundt, Eulenberg, and Barth at the University of Leipzig. He also had the good fortune to regularly attend concerts at the Gewandhaus with renowned conductor Arthur Nikisch.

While Bell was studying in Leipzig he was introduced to the work of Edmund Husserl who was teaching at Göttingen University at that time. He became interested in a particular aspect of Husserl's thinking and "I got the idea that Husserl might be the man I should want to learn from and work under." [5]

He moved to Göttingen from Leipzig in February of 1911 and attended his first seminar with Prof. Husserl on April 29. He returned to North America for the summer and spent much of it in Nova Scotia. It was to be the last time that he would see his parents.

Bell returned to Germany from North America in October of 1911 and began his work in earnest with Edmund Husserl, who was the chief proponent of a branch of philosophy that emerged at the outset of the 20th Century. The primary objectives of this school of thought were "to take a fresh approach to concretely experienced phenomena through the direct investigation of the data of consciousness." [6] Winthrop Bell's first semester did not proceed as he had initially envisioned.

"Actually, the first semester in Göttingen I was greatly disappointed in Husserl. The subject of his lectures that semester was something for which I was not at all prepared, and it was only after a semester or two in which I listened also to Nelson [Leonard Nelson 1882-1927] that I got into any proper way of appreciating Husserl. That I did so was due to some considerable extent to Reinach's [Adolf Reinach 1883-1917] mediation of the basic principles of phenomenological thought." [7] 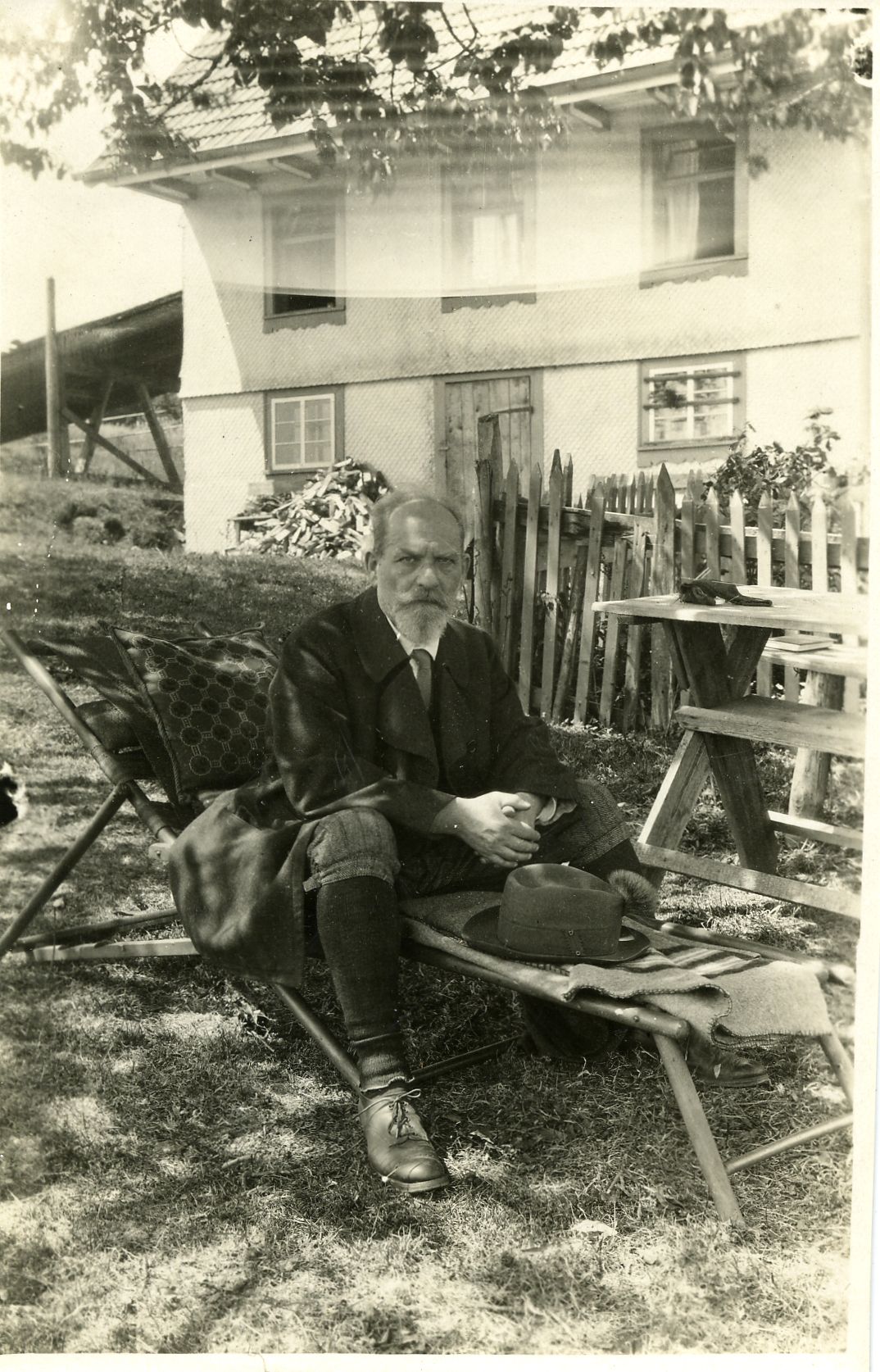 Göttingen was a centre of intellectual activity when Bell was there. He also enjoyed opportunities to study with such German luminaries as Max Scheler, Wilhelm Lexis, G.E. Muller, and Otto Oldenburg. Bell counted among his friends from that time intellectuals including Carl Runge, Edith Stein, Richard Courant, Alfred Hoernlé, and Jean Hering. He worked diligently on his course work during the fall and winter of 1910-11 and related the following:

"I used to scribble notes constantly. Husserl never understood that it was in that way that I really "got" things. He used to adjure me to lay my pencil down and participate more. But I would soon be noting down again something I wanted to be able to refer to later." [8]

Ultimately, Professor Husserl asked him to prepare a written summary of the work that had been covered during the course of the term. Husserl was very pleased with Dr. Bell's precis of his lectures and asked if he would like to do his doctoral work under his guidance, beginning with the winter semester.

When Bell discussed his ideas for his doctorate Husserl re-directed Bell's focus to the thought of American philosophers, William James (1842-1910) and more specifically Josiah Royce (1855-1916).

"I had some of Royce's books in Germany with me, and ordered the others, and was able to take Husserl, before long, the whole imposing heap of Royce's publications. Husserl then would have nothing else than that I should do my Doktorarbeit [Doctoral work] on Josiah Royce." [9]

"I was caught in Germany by the outbreak of the first world war. In fact, my oral examination took place after the war had broken out, and under most unusual circumstances. I was in 'protective custody', having been hauled out of bed in the middle of the night when England declared war ... The professors with whom I was to have my examination enquired and found that there was no actual rule that a candidate must be examined in the Aula [traditional hall for examinations] and must wear "Frack" [formal dress] for it, so they together with the distinguished man who was to be chairman of the affair, came to the place of my "Haft" [detention] ... and examined me there." [10]

With the rise of hostilities at the outset of the First World War, the faculty at Göttingen ultimately voted to annul Dr. Bell's doctorate and repaid his fees while he was interned. A number of years after the war a group of his former friends suggested that he submit a summary of his dissertation so that the other records of his work could be reinstated and the degree finally conferred. Consequently, his degree was formally bestowed in May of 1922, almost eight full years after he had originally completed the doctoral work.