Winthrop Bell had been approached by the University of Toronto in January of 1921 to determine if he was interested in teaching at the institution. He received confirmation of his teaching appointment from the University of Toronto in a letter dated June 28, 1921, and he began lecturing that fall. He served primarily as a examiner and lecturer in philosophy. He resided in a suite at Hart House during his time in Toronto and finished his duties in May of 1922. That same month his doctorate was reinstated by Göttingen University which may explain why he decided to move on to Harvard University in the fall of 1922. 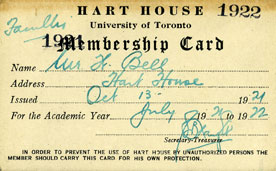 Dr. Winthrop Bell's membership card to Hart House at the University of Toronto, 1921-1922

Bell next served as an Assistant in Philosophy at Harvard University. Although the schedule was quite rigorous, he appears to have initially enjoyed his time at the institution and was very much involved in the academic and cultural community there. He became a member of the Harvard Club in December of 1922 and was a regular attendee of the Boston Symphony and a number of other performing groups on campus and in the city of Boston.

While at Harvard he was also able to meet and forge relationships with such intellectual luminaries as Professors Gerhart von Schulze-Gaevernitz, William Ernest Hocking, Benjamin Rand, and George H. Palmer, among others. His time there was very busy which was compounded by his continuing involvement with his brother’s business activities in Nova Scotia and the jointly owned building at 131-133 Granville Street in Halifax.

In a letter to his brother Bell described his position at Harvard in very humble terms. During the first few years that he was there he oversaw one of the dormitories which provided him with free rent to augment his income. After his marriage to Hazel Deinstadt on October 7, 1925, he had to give that up and instead took on additional teaching duties at Radcliffe College to supplement his income and help to maintain his household. [1]

Dr. Bell took the 1925-1926 academic year off from work as he and his new wife set up house in a cottage in Chester, Nova Scotia. The year appears to have been challenging because his new bride was not well and he became further involved in the work of his brother’s businesses. In March of 1927 he also lost a number of personal belongings and much of his earlier correspondence in a fire at the J.E. Morse warehouse in Halifax. Dr. Bell particularly regretted the loss of his correspondence with his father.

Bell completed his final year at Harvard in 1927. He would never return to an active teaching role but his interest in history and philosophy would continue for the balance of his life.  His academic legacy was still waiting to be completed.