After Dr. Bell arrived back in England from Germany he set about visiting friends and family in Great Britain. Shortly after his arrival he had occasion to meet with Bell family friend and Canadian Prime Minister, Sir Robert Borden. The evidence suggests that Borden was very interested in hearing what Bell had to say about the situation in Germany and contacted a number of people that might be able to use his expertise.

Bell was in no rush to get home. He had lost both of his parents before the end of the war and was probably looking for an avenue that would let him use the knowledge and experiences that he had over the last decade to greater advantage.

In January of 1919 he met with contacts at the Reuters News Agency office in London. He received a letter of appointment from them at the end of that month and travelled to Holland and Germany the following month. 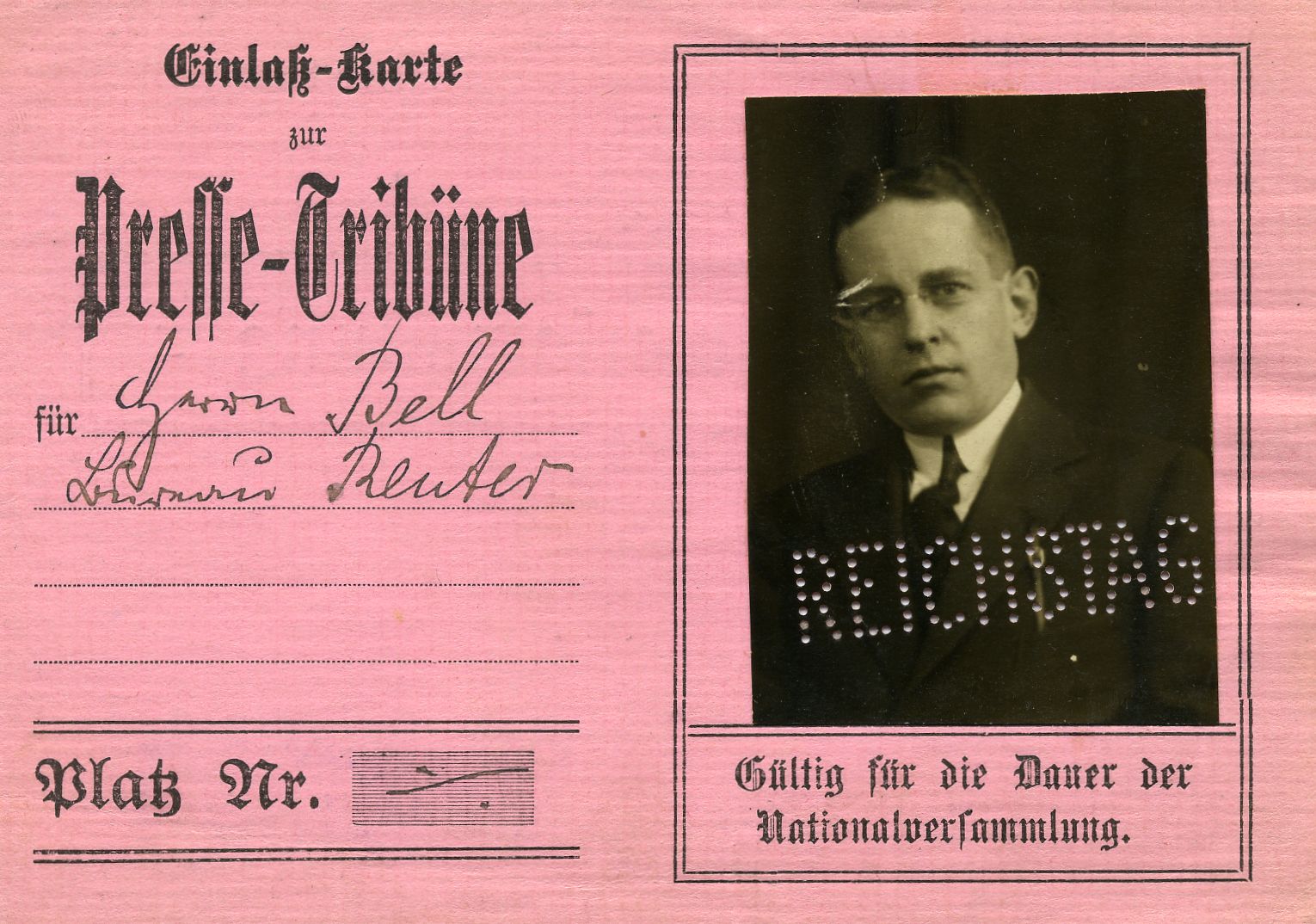 Press card for admittance to the Reichstag or German National Assembly in Berlin, Germany as a Reuters correspondent, 1919.

Winthrop Bell attended the Reichstag or German National Assembly and produced reports about the sitting of the government and the related activities that were taking place there.

He returned to England for June and July to conduct research and attempt to make travel arrangements to go to the Baltic States to report on ethnic Germans living there. During the month of August Bell took holidays and travelled back to Göttingen where he visited with friends and began the process of packing up his things to have them sent back to Canada. He also briefly visited with Prof. Edmund Husserl and his wife at their home in Freiburg.

He returned to Berlin in September and continued to file reports until early November when he travelled to England to complete his work with Reuters. He stayed on in England visiting with friends and family until late February 1920 when he sailed for Canada arriving in Halifax on March 3.

Upon his return to Nova Scotia Winthrop Bell focused on the settlement of his parents' estates. During the latter part of March and the month of April he travelled to the United States to visit relatives and acquaintances, returning via Toronto, Ottawa and Montreal. In May he became involved in his brother Ralph's lumber interests and did scouting work on foot in southwestern Nova Scotia, visiting camps and checking out the quality of the lumber. This work was carried out predominately in Digby County during the balance of 1920 and the spring of 1921. However, his life was about to change again when he secured a teaching position at the University of Toronto.