Dr. Bell's work on his family history was, from an early age, clearly a labour of love. During his summer holidays in 1912 he travelled to Northern Ireland to visit with relatives and while there undertook research with the help of his cousins Mary Coburn and Helena Wark. He also had occasion to visit the Allison family home 'Drumnaha' at Magilligan, County Londonderry and heard many of the stories about that family connection that later inspired him to publish his recollections. 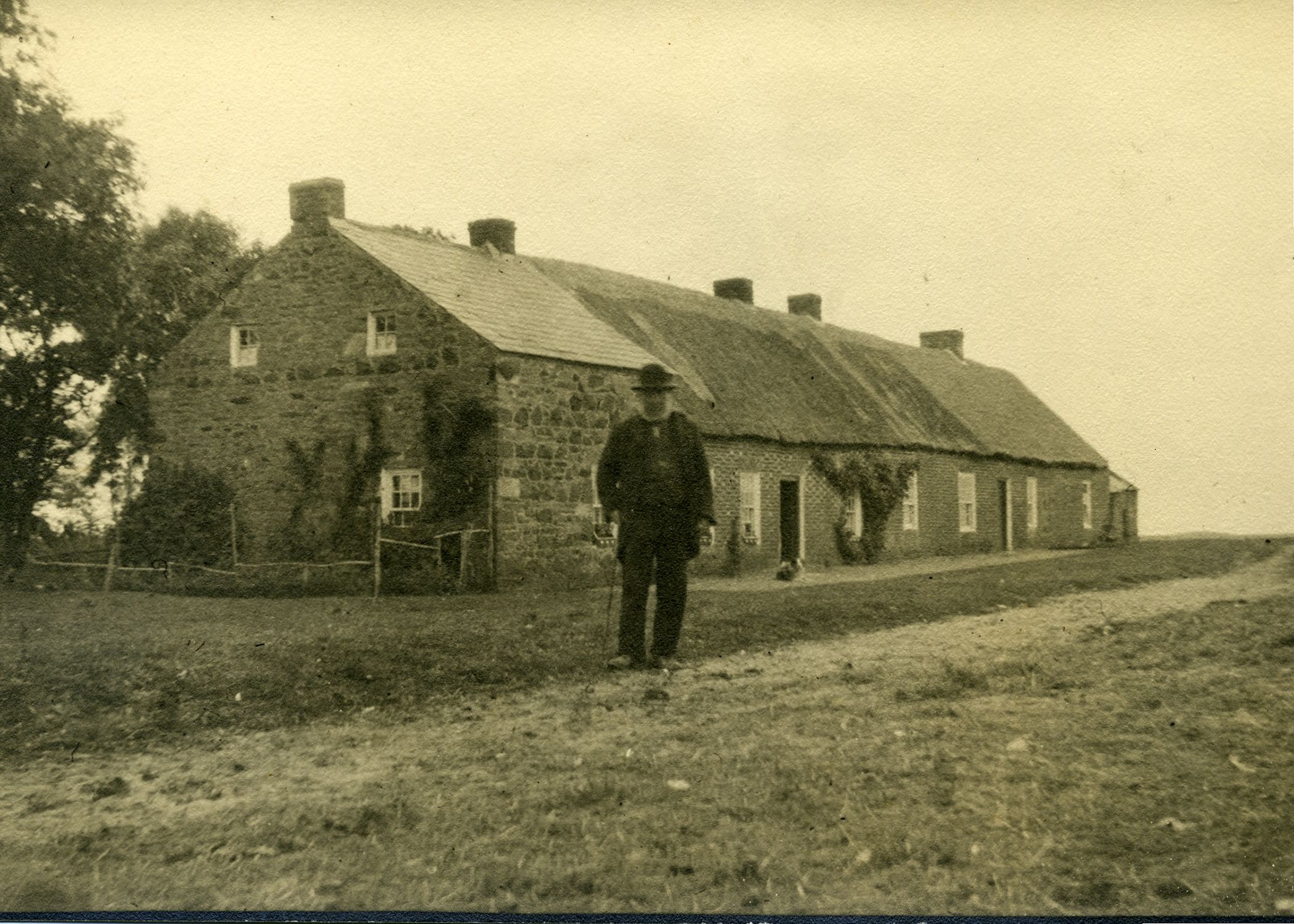 Image taken by Winthrop Bell of the farmhouse 'Drumnaha' at Magilligan, County Londonderry, Northern Ireland with Samuel Allison III (1833-1921) in the foreground , 1912

In his introductory chapter to A Genealogical Study Dr. Bell indicates that the act of collecting family history information was spread over most of his lifetime and he would gather details and store them first in an envelope and later in files specifically for that purpose. He was also keenly aware of the pitfalls in this type of research when he wrote the following in 1951:

"I needn't tell you what pitfalls there are in the gathering of data. A case came under my notice just a few years ago, when a relative of mine circulated to a whole family connection a privately printed script. He had accepted a whole section of genealogy on the authority of a family member. There was just one slight fault with it:- One whole generation had been left out? As a result, of course, relationships were all askew." [1]

He began the task in earnest during the 1950s. He sent out questionnaires to relatives scattered across North America to ensure that he received precise details that were in some cases corroborated by a number of family members. He also engaged the help of his sister-in-law to aid in his quest for details.

"I know Ralph has no interest in genealogical matters. But I happen to have, and others of the total family connection have, too. Over the years, gradually, and at first practically fortuitously, I have collected a mass of genealogical information. Latterly I have more purposefully utilized opportunities to fill out the collection of data. Finally, realizing that nobody else would ever be able, later, to amass anything like the amount of material I have gathered, I have thought I should put it all down in proper tabular form, for printing, while I still could." [2]

His brother, Ralph Bell, clearly shared their father's disdain for the subject of family history but for Winthrop Bell there were other reasons that inspired his interest.

"We are inescapably conditioned by the past; in the first instance genetically by our own past – our particular progenitors. And while the other main agency of conditioning by the past – the influence of "tradition" in the moulding of one's native endowment – may come from many sides ... Thus there are many respects in which it seems to me no idle or unworthy pursuit to try to find out what one can about that particular ancestral past." [3]

Dr. Bell was able to complete the manuscript for this work during the long delay in waiting for the page proofs of his other book, The "Foreign Protestants" and the Settlement of Nova Scotia during 1960. He finished the manuscript, prepared the illustration blocks and had it published in the Maritimes in very short order. He also prepared ozalid prints of a number of charts documenting the Bell and Pickard family lineages with related diagrams, all of which were hand drawn. This is yet another remarkable example of his research and determination. His only disappointment with the process was expressed as follows:

"My regret is that we cannot find out more about some of those others. It would interest me to find out what manner of men and women they were, than to know how big a noise they made in the world. Should, for instance, a hitherto unsuspected packet of intimate letters or other revealing papers of some progenitor turn up, I should be more pleased if they gave us insight into one of these of whom we know scarcely more than the name, than if they added to our knowledge of one of the comparatively distinguished figures of whom we already know a good deal." [4]