The following list contains a select number of art exhibits, music recital, theater productions, and literary events hosted on the Mount Allison University campus between 1940 and 2000 relating to Acadians.

On 17 April 1941, internationally recognized violinist Arthur LeBlanc performed in the Charles Fawcett Memorial Hall as part of his tour of the Maritimes. Arthur LeBlanc was born in 1906 in Saint-Anselme, Westmorland County, New Brunswick. He started playing the violin at the age of 3 and received his early education at the Petit séminaire de Québec in Vieux-Québec, Québec. He joined the Symphonic Orchestra of Montreal in 1939, eventually becoming a professor of music at the University of Laval.  Although he is remembered for his Acadian music, his recital focused primarily on classic violin pieces.[1]

On 3 December 1942, Arthur LeBlanc played another recital in the Charles Fawcett Memorial Hall.[2]

On 16 February 1974, a production of Pierre Mathieu’s play, Evangeline—Qui Donc?, was presented in Windsor Theatre by L’Hexagone, a professional theatre company created in 1972 by the National Arts Centre with the intention to contribute to the diffusion of francophone culture in Canada. According to Jim Enman, the play “succeeded in communicating the . . . spirit of the Acadians and their sense of tradition and the injustices they have endured—in a manner which dissolved the cultural wall with humour compassion, sensitivity and humanity and gave a largely English-oriented audience an insight into our Acadian neighbours character which was truly memorable.”[3]

In February 1974, the Sackville Art Association sponsored an exhibition of Léo B. LeBlanc’s paintings at the Ralph Pickard Bell Library. Léo B. LeBlanc was born 15 September 1914 in Moncton, New Brunswick and grew up in Notre Dame, Kent County, New Brunswick. He had a traditional Acadian upbringing and worked in farming, logging, and poultry before turning to painting later in his life. His art, which was simple in style, captured the essence of the Acadian people through scenes and landscapes. In his short career as a painter, LeBlanc exhibited all around the country. He boasted that he had only received one art lesson—from Alex Colville. The exhibition displayed nineteen selections on the walls of the Ralph Pickard Bell Library between February 10 and 24, 1974. It was the first campus art display held outside the walls of the Owens Art Gallery. [4]

On 10 October 1979, there was a screening of the Acadian documentary “Au boutte du quai” as part of a three-day Canadian film festival on francophone culture happening on campus.[6]

In December of 1979, the Mount Allison Owens' Art Gallery hosted an exhibition of Marie Hélène Allain's work. Allain is an acadian artist born in Sainte-Marie-de-Kent, Nouveau-Brunswick in 1939. She has been showing her work in Canada, the United States, and France since 1972.

On 14 October 1984, during the Fall Convocation at which Acadian music professor Florine Després was awarded an Honorary Doctor of Music, the Sackville Bicentennial Committee and the Centre for Canadian Studies hosted Les Jeunes Chanteurs d’Acadie in concert. The choir performed classical chants as well as certain Acadian folklore, including “En montant la rivière” and “Partons la mer est belle.” Monique Gould, current professor of Music at Mount Allison University, was part of the choir and performed two solos.

In October 1984, the bilingual theatre troop Tintamarre put on “Charivari: The Sounds of Tantramar,” a play written and directed by Alex Fancy. The play deals with the expulsion of the Acadians from the Tantramar marshes.The play was reprised in 1989 and again in 2008, the year Sackville was designated the Cultural Capital of Canada.[7] 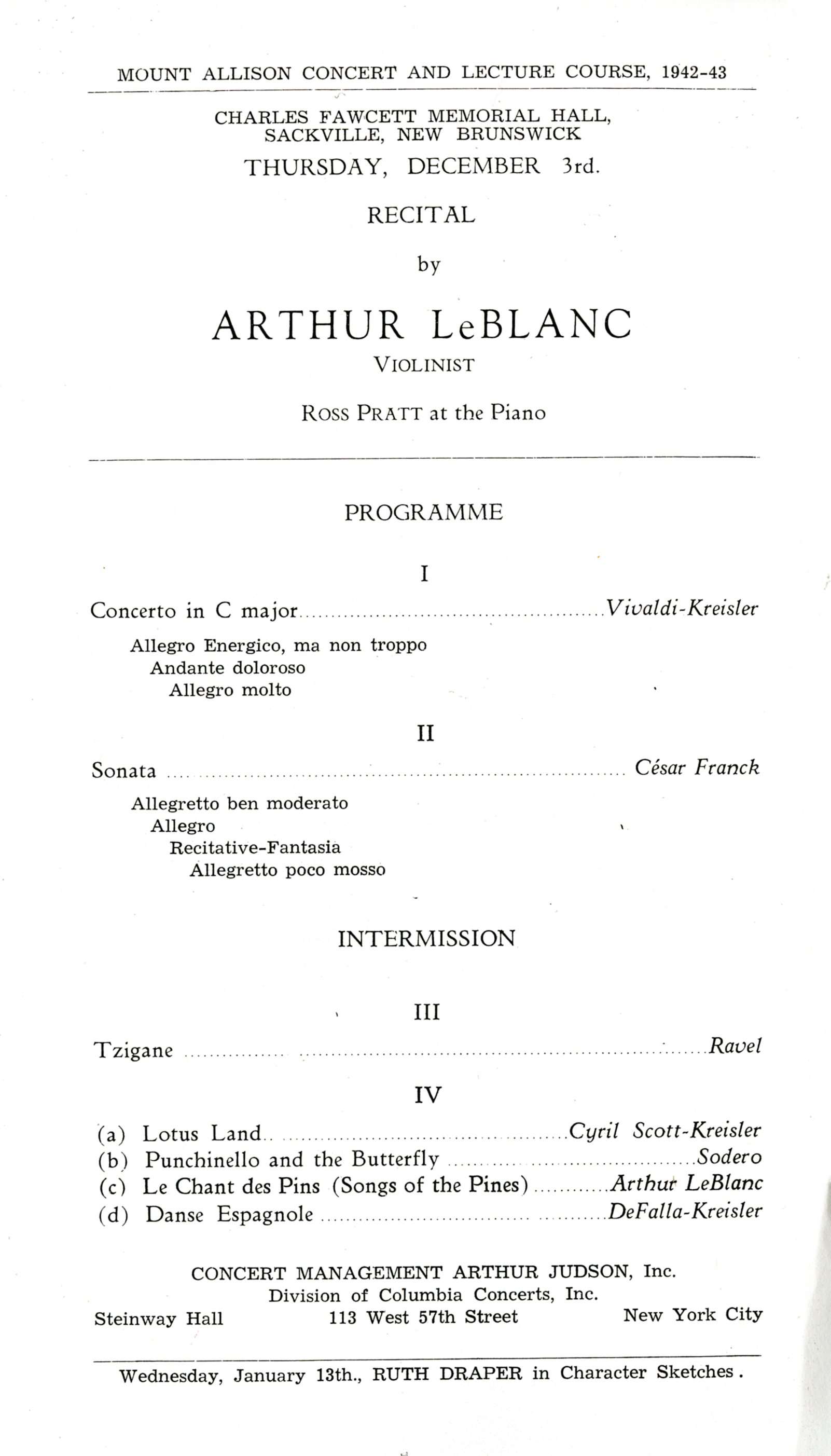