History of Acadians at Mount Allison: The Argosy

Mount Allison University students appear to have held an early fascination with Acadian history. This translated into a variety of student publications, including The Argosy, one of the longest standing Mount Allison publications.

In 1877, one student published an anonymous article in The Argosy entitled “Beauséjour.” The article discusses a visit to Fort Cumberland (Fort Beauséjour) and relays the history of the 1755 raid on the fort, speaking briefly of the early Acadian and indigenous inhabitants of the land. [1]   Quoting Henry Longfellow, the author acknowledges the legacy of the early Acadian inhabitants of Sackville. Longfellow served for many early students as an introduction to the plight of the Acadians. In 1881, another student wrote a review of Longfellow’s poetry, with quick mention and analysis of Longfellow’s perennial “Évangeline. [2] The allure of the story of Évangeline extended to the students of the Ladies’ College as well, where a female student appeared in a 1907 photograph dressed up as Évangeline for Halloween. [3] While these quick mentions abound in early publications, Acadians do not feature prominently in them. 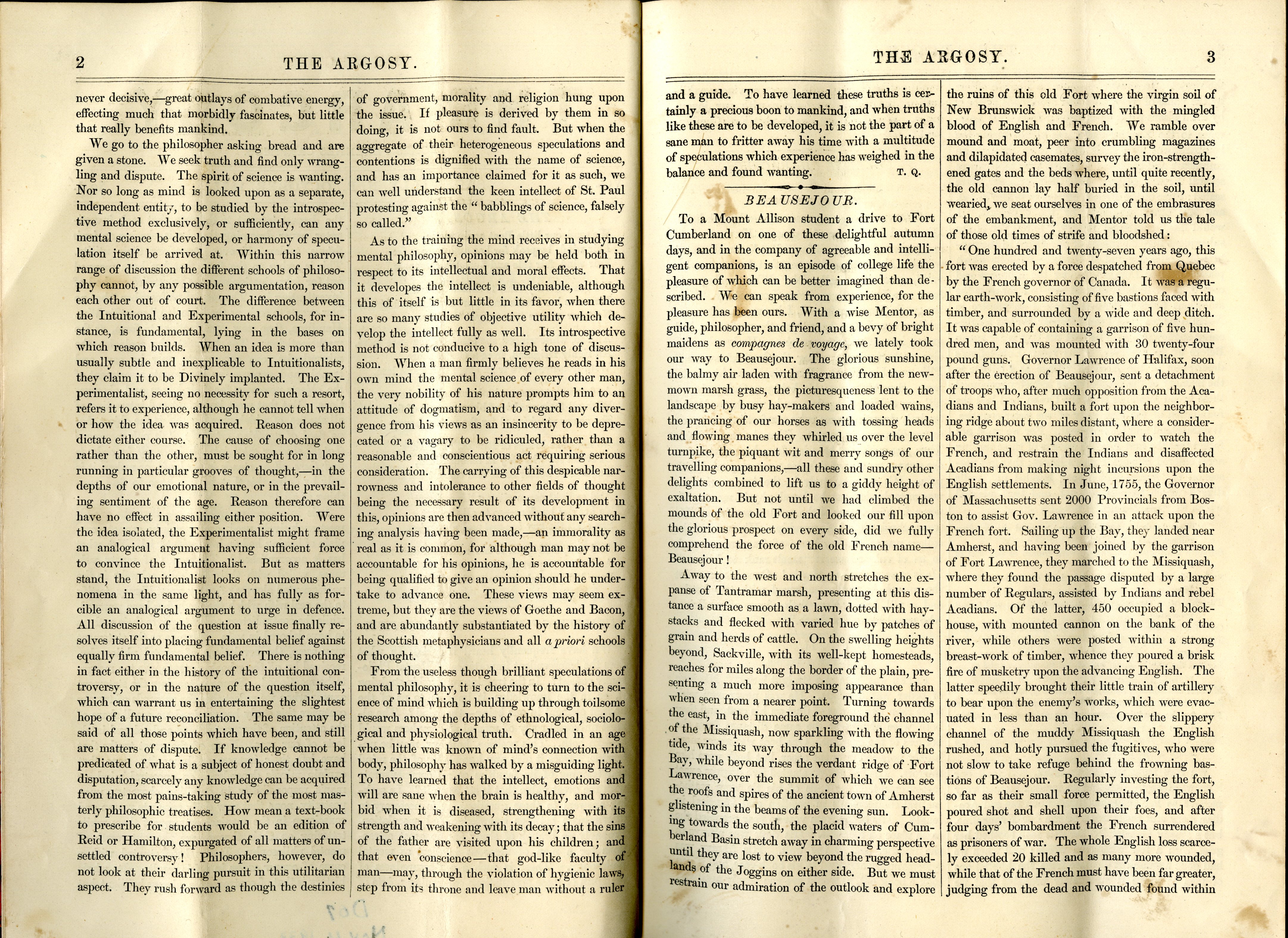 Article entitled “Beausejour" that appeared in The Argosy in 1877

The anonymous author discusses a visit to Fort Cumberland (Fort Beauséjour) and the 1755 raid on the fort, speaking of the early Acadian and indigenous inhabitants of the land. 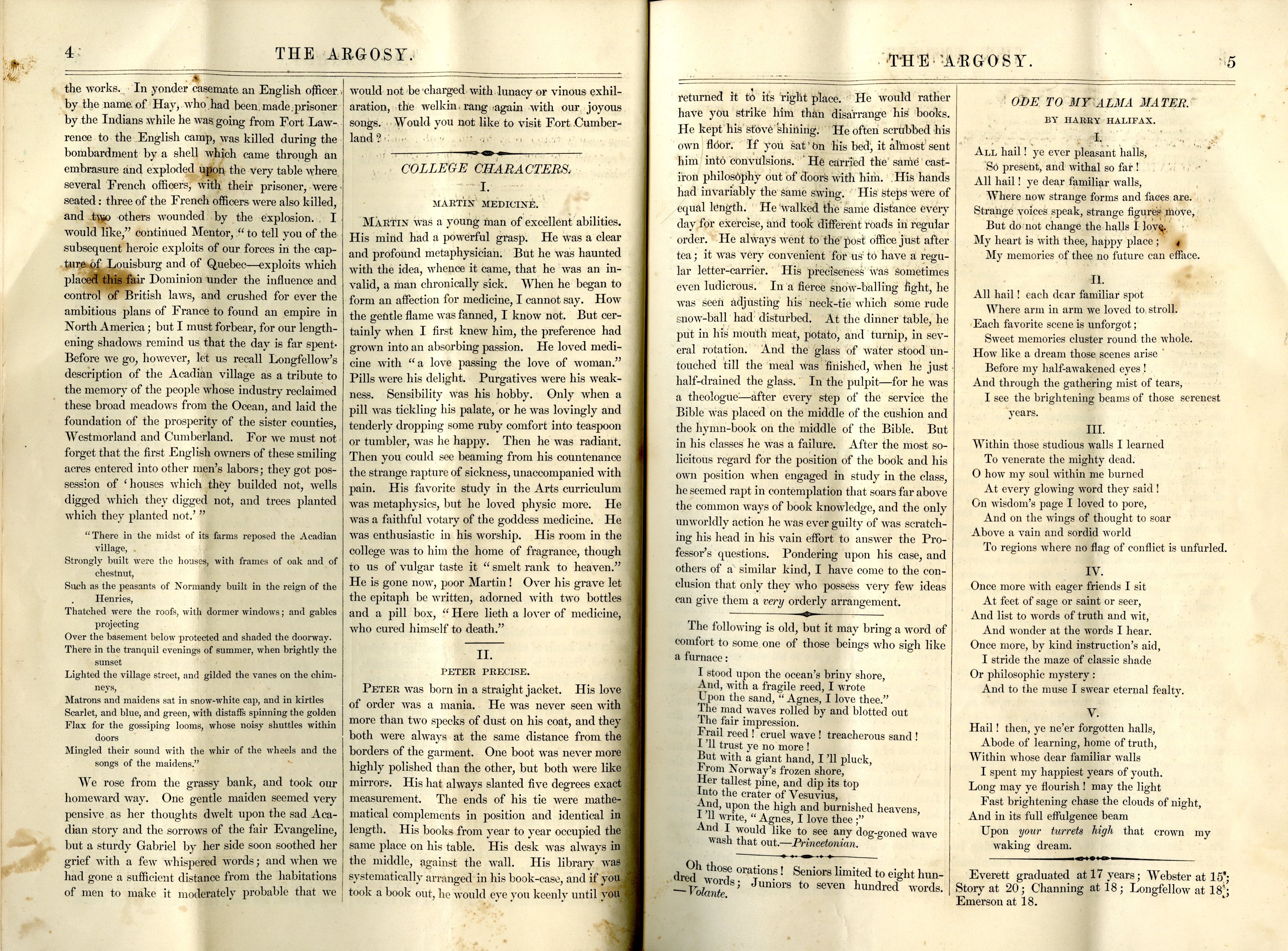 Article entitled “Beausejour" that appeared in The Argosy in 1877

The anonymous author discusses a visit to Fort Cumberland (Fort Beauséjour) and the 1755 raid on the fort, speaking of the early Acadian and indigenous inhabitants of the land.

To produce a comprehensive list of articles from The Argosy that dealt with the topic of Acadians and Acadia proved to be a much larger undertaking than could be accomplished within the time frame of this project. The following list includes references to the relevant articles that were published between 1960 and 2000. This period was selected in order to document Mount Allison’s response to the Acadian renaissance that began in the 1960s, with the establishment of l’Université the Moncton and the massive changes brought about by the Louis J. Robichaud government, including the fight for bilingualism. This list in no way constitutes the extent of the coverage of Acadian topics in our student publications, but we invite you visit the archives to peruse the rest of Mount Allison University’s 145 years of student journalism.

“Dialogue ‘68” by Hans Durstling. – 1 November 1968, p. 6. Dialogue ’68 was a conference on the subject of human rights held on campus which originated from the Religious Life on Campus Committee. It included a discussion on “The French in New Brunswick” with speakers who “will examine in what ways the human rights of Acadians are presently being violated and what can be done to change this”

“Happiness is a Warm Hose” by Ronnie Morgan. – 31 January 1969. – p. 6. Article provides an inside view into the student occupation of a campus building at l’Université de Moncton

“Student Unrest.” – 25 March 1969. – p. 5. Article on “‘Values Changes and Action ‘69’: Student Conference of Atlantic Universities.” The conference, which was to include students from 11 Atlantic Universities, was to be held at the Memramcook Institute and was “planned to be as bilingual as possible.”

“Conference on Bilingualism to be held at U de M.” The Argosy Weekly, vol. CII, no. 2. – 19 March 1973. – p. 13. Article discusses a conference entitled “Bilingualism: Myth or Reality for the Atlantic Region” to be jointly sponsored by Mount Allison University and l’Université de Moncton between 4 and 8 May 1973.

Editorial. The Argosy Weekly, vol. CV, no. 7. – 8 March 1976. – p. 2. Editor apologizes “for largely ignoring [the Université de Moncton students] in their fight (in what should have been OUR fight) to bring government and public attention to the sad state of the student aid program.”

“Growing Together.” The Argosy Weekly, vol. CVIII, no. 6. – 11 October 1979. – p. 7. Article discusses a meeting of Francophones in New Brunswick voting on the establishment of a separate Acadian province. It also announces a Vesper Service led by students of French department with special guest Dr. Fernand Arsenault, Professor of Religious Studies at l’Université de Moncton, to be held on 14 October 1979.

“Society Update” on Das Deutsches Klub [The German Club] and their performance of a trilingual play on early settlers of Lunenberg and the expulsion of the Acadians from the region. The Argosy Weekly, vol. CXVI, no. 13. – 5 February 1987 – p. 6

“Tintamarre Chaivari 89! Je me souviens” / Derrick Sleep. The Argosy Weekly, vol. CXIX – 19 October 1989. – p. 11. Article provides a comprehensive review of the play “Charivari ’89: The Sounds of the Tantramar” by Alex Fancy, which brings to life the struggle of the Acadian people in New Brunswick and in the Sackville area. It documents the author’s beliefs that “bringing up the wrongs of the past are impolitic” and his suggestion to “[not] jeopardize the fragile truce that we [the English and French of New Brunswick] have.”

“Charivari Huge Success.” Letter to the Editor from John McNutt and Mark Arsenault that deplore Sleep’s review of “Charivari ’89: The Sounds of the Tantramar.” The Argosy Weekly, vol. CXIX – 26 October 1989. – p. 5