Ernest René Richard was born on 25 September 1887 in Dorchester, Westmorland County, New Brunswick. He was the son of the Honorable Ambrose David Richard (1849-1917) and Elizabeth V. Holt (1860-1941). He received his early education from St. Anne de la Pocatière in Québec. He earned a B.A. from St. Joseph’s University in 1906, an LL.B. from Dalhousie University in 1910, and an M.A. from St. Joseph’s in 1930. He started practicing law in Dalhousie, New Brunswick in 1911 and came to Sackville in 1919. He taught at Mount Allison University as a lecturer in Law of Contracts from 1928 to 1934. Between 1934 and 1940 he served as a member of the Pension Appeal Court in Ottawa. He was Chairman of the New Brunswick Commissioners on the Uniformity of Legislation in Canada from 1933-34, Commissioner on the Revision of the New Brunswick Statutes from 1926-27, and served as a member of the Executive Council of Canadian Bar Association. Richard served nearly four terms as mayor of the town of Sackville from 1954 to 1957. He died while in office on 5 November 1957. In an article honoring the late mayor, a writer for the Sackville Tribune-Post wrote that “His talents could have been . . . welcomed anywhere in Canada, but he preferred to live here in this little town of Sackville . . . [T]he call of the Maritimes, where he first formed his roots, where his Acadian ancestors lived, was very strong within him.” [1]

He married Grace Mildred Murry (1894-1973) in Montreal, Quebec in 1925, and the couple had three children: Julie (Class of 52), René (Class of 57), and Marie. During their time in Sackville, Grace was a Councilwoman and Regent of Lord Sackville Chapter of I.O.D.E. He is buried in the Sackville Rural Cemetery in Sackville, New Brunswick. 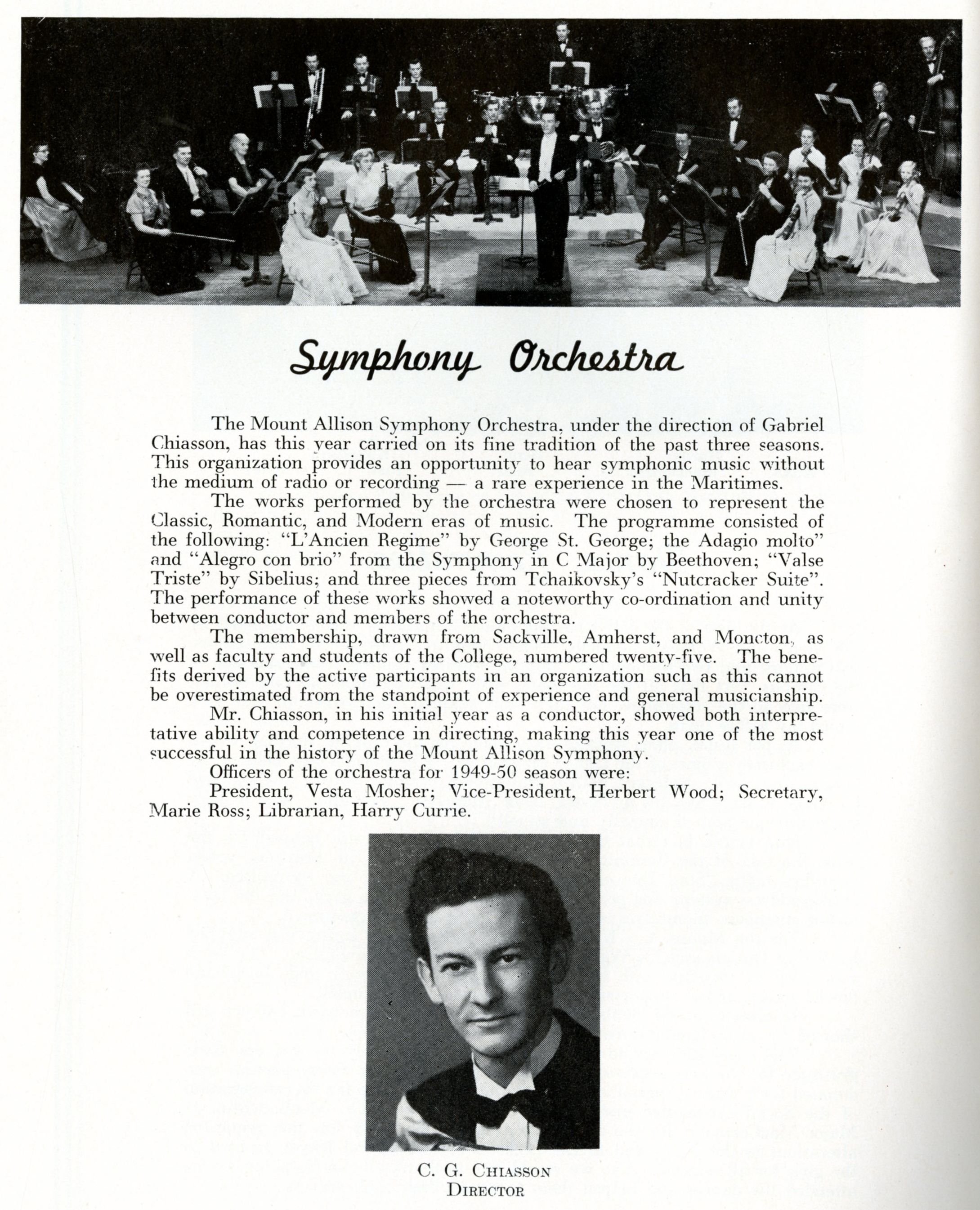 Christophe Gabriel Chiasson was born in 1923 in Lameque, Gloucester County, New Brunswick. He was the son of Jean-Paul Chiasson (1884-1978) and Bernadette Haché (1889-1970). He attended the Mount Allison Maritime Summer School in 1945 and entered Mount Allison University in the fall of 1946, earning a Bachelor of Music in 1949. While in attendance he was part of the Dance Band Club (1948). After graduation, he joined the staff of the Mount Allison Music department as an instructor of piano, where he taught from 1949 to 1951. During that time, he also served as Director of the Symphony Orchestra. Gabriel subsequently pursued a career in education and went on to teach music in the public school system for 30 years. He married fellow music student Anne May Murphy (1925-2017) (1947 Licentiate of Music) in 1950. The couple had six children: Monique, Christophe, Elaine, Annette, Paul, and Alec. He died on 1 January 2012 in Summerside, Prince Edward Island. He is buried in Floral Hills Memorial Gardens in Pleasant Valley, Prince Edward Island. 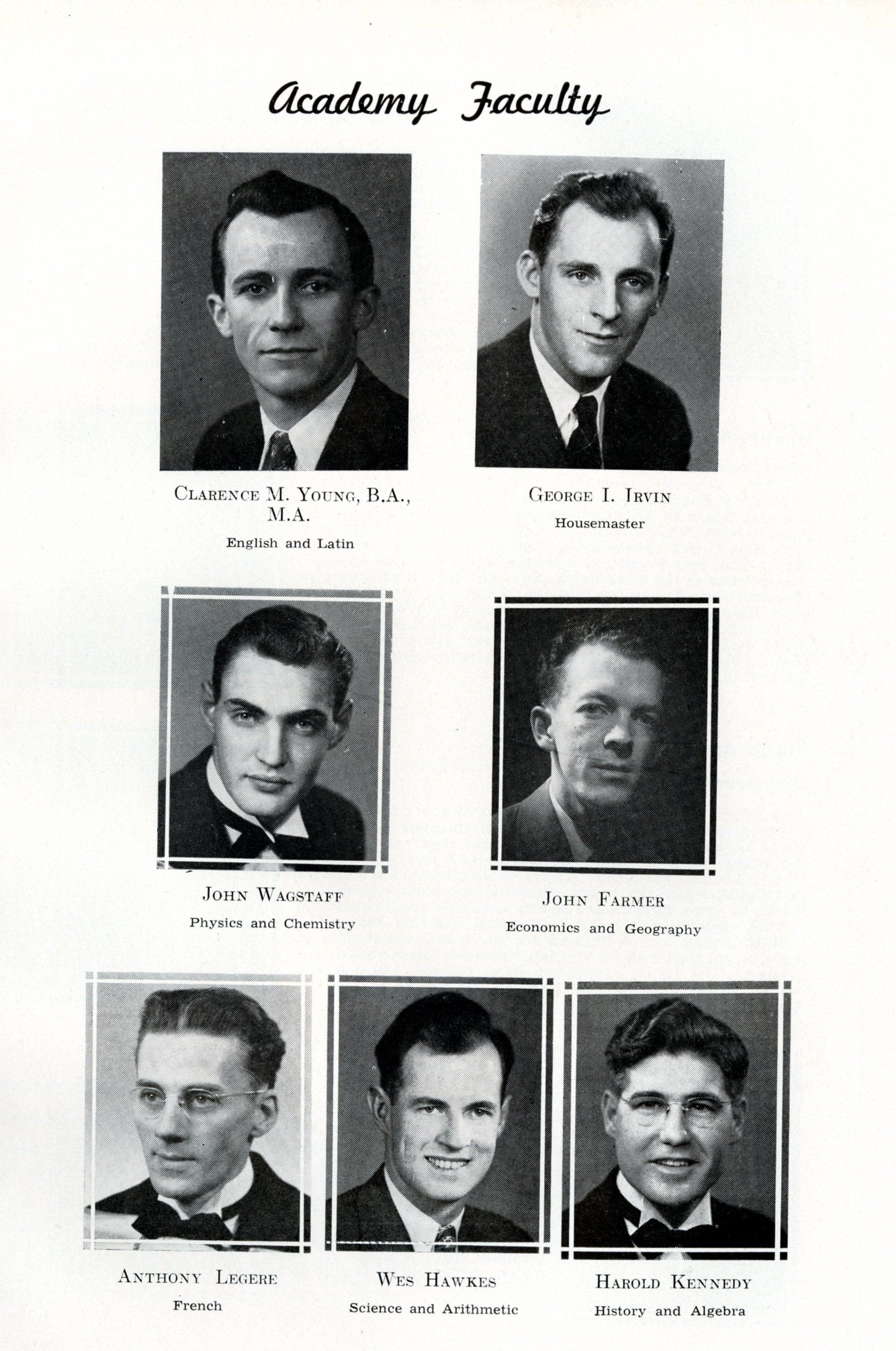 Anthony Leonard Legere was born on 16 November 1913 in Memramcook, Westmorland County, New Brunswick. He was the son of Hyppolite Légère (1867-1938) and Rosalie Richard (1875-1968). He entered Mount Allison University in the fall of 1947, graduating with a Bachelor of Arts in modern foreign languages in 1950 and a Bachelor of Education in 1962. While in attendance, he was secretary (1948-49) and subsequently president (1949-50) of the French Club and taught French at the Mount Allison Academy and Commercial College. Legere also held a degree from the Nova Scotia Teachers College (1933) and taught in several schools around the Maritimes before joining the staff of the Amherst Regional High School in 1942, where he taught until his retirement in 1972, besides the 3 years that he spent serving in the Royal Canadian Air Force from 1942 to 1945. He married Eva Grace McManaman (1920-2006) in 1940. The couple had four children: Marilyn, Leonard, Paul, and David. He died on 24 April 1994 in Amherst, Nova Scotia. He is buried in the Saint Charles-Nativity Roman Catholic Cemetary in Amherst, Nova Scotia.