Acadian names can be found peppered throughout the academic records in the archival holdings. They appear as early as 1899, when an E. A. Melanson from Middle Sackville is listed as a student at the Wesleyan Academy for boys, one of Mount Allison's founding institutions. Despite being present in the records, little can be gleaned about the unique experiences of these first students. Many of them received their education at the Male and Female Academies and the Commercial College rather than at the university, and sometimes only attended as day students.

One such student was Georgina Ethel Melanson, born 25 October 1887 in Joggins Mines, Nova Scotia. She was the daughter of Edward Melanson (1852-1944) and Margaret Hennessey (1862-1919). “Georgie,” as she was called by her classmates, entered the Mount Allison Ladies’ College in the fall of 1903. Georgie would travel from Joggins Mines to Sackville regularly for her lessons in Piano and Violin, and though she was not a resident of the Ladies’ College, she was very much involved in the campus community. While in attendance, Georgie played first violin in the orchestra and performed in a number of recitals until she graduated with a Piano Teacher’s Diploma in 1908. Thereafter, Georgie moved to Amherst, where she begun to give lessons in piano, and frequently travelled to Sackville to continue her own studies. She completed her post-graduate work in Violin in 1910.

Georgie was joined in the winter of 1904 by her cousin, Alice Maude Melanson, daughter of Charles Melanson (1851-?) and Sara Hennessy (1864-?). Alice graduated with a Piano Teacher’s Diploma in 1910 and promptly returned to Joggins’ Mines, Nova Scotia where she taught music. Despite the women’s anglicized names, both families are listed in the 1901 census as being French and of Roman Catholic faith. It is likely, however, that the two women enjoyed the benefits of having learned both English and French at home. Eventually, Georgie settled in Moncton, New Brunswick, where she married John MacInnes and had two daughters: Margaret Olwin and Elaine. Georgina died on 18 June 1952 in Moncton. 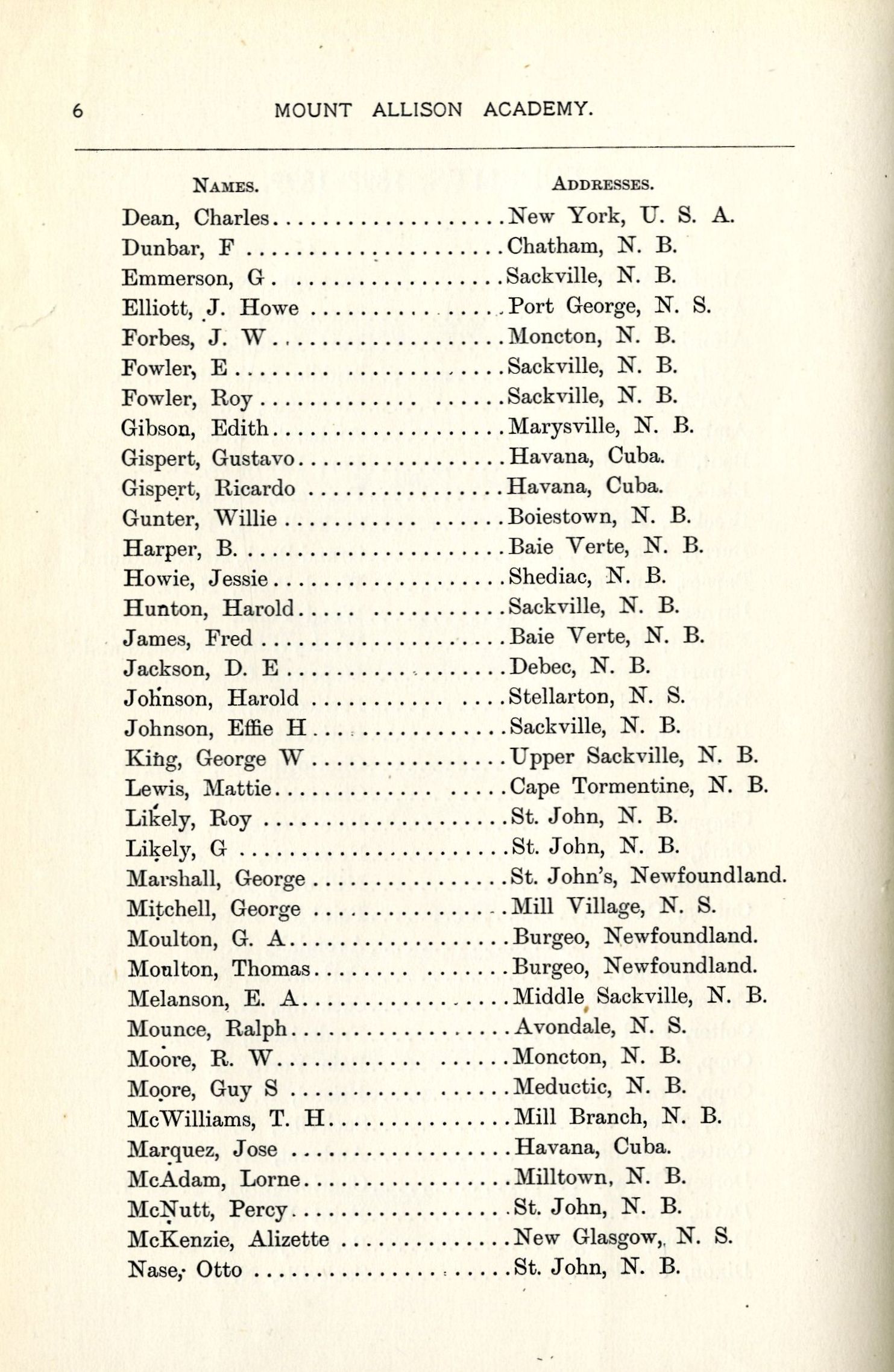 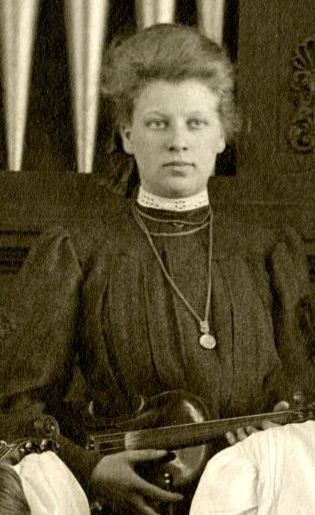 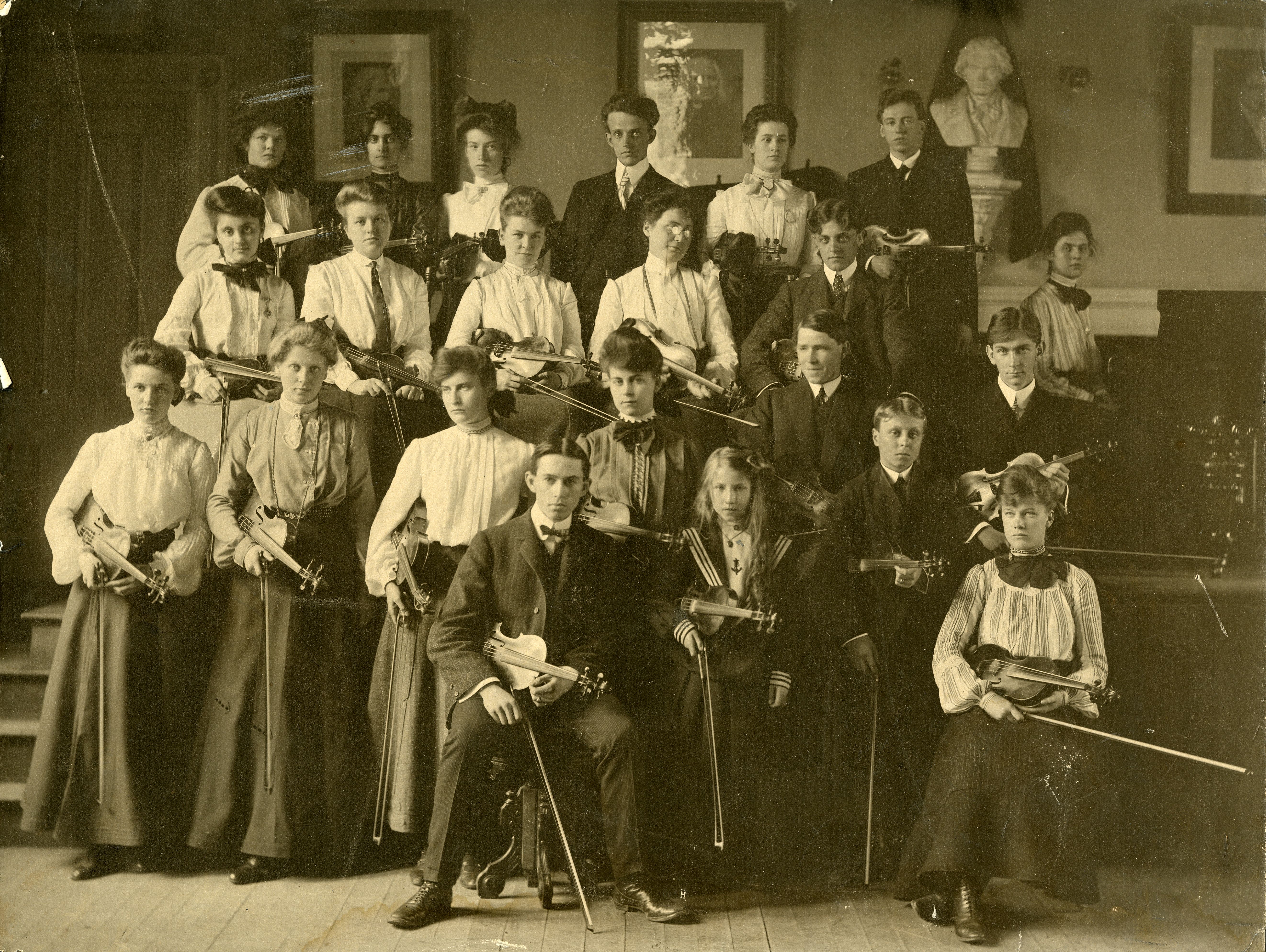 Members of the 1905-1906 Mount Allison Orchestra in Beethoven Hall

Georgina can be seen standing in the front row, second from the left. 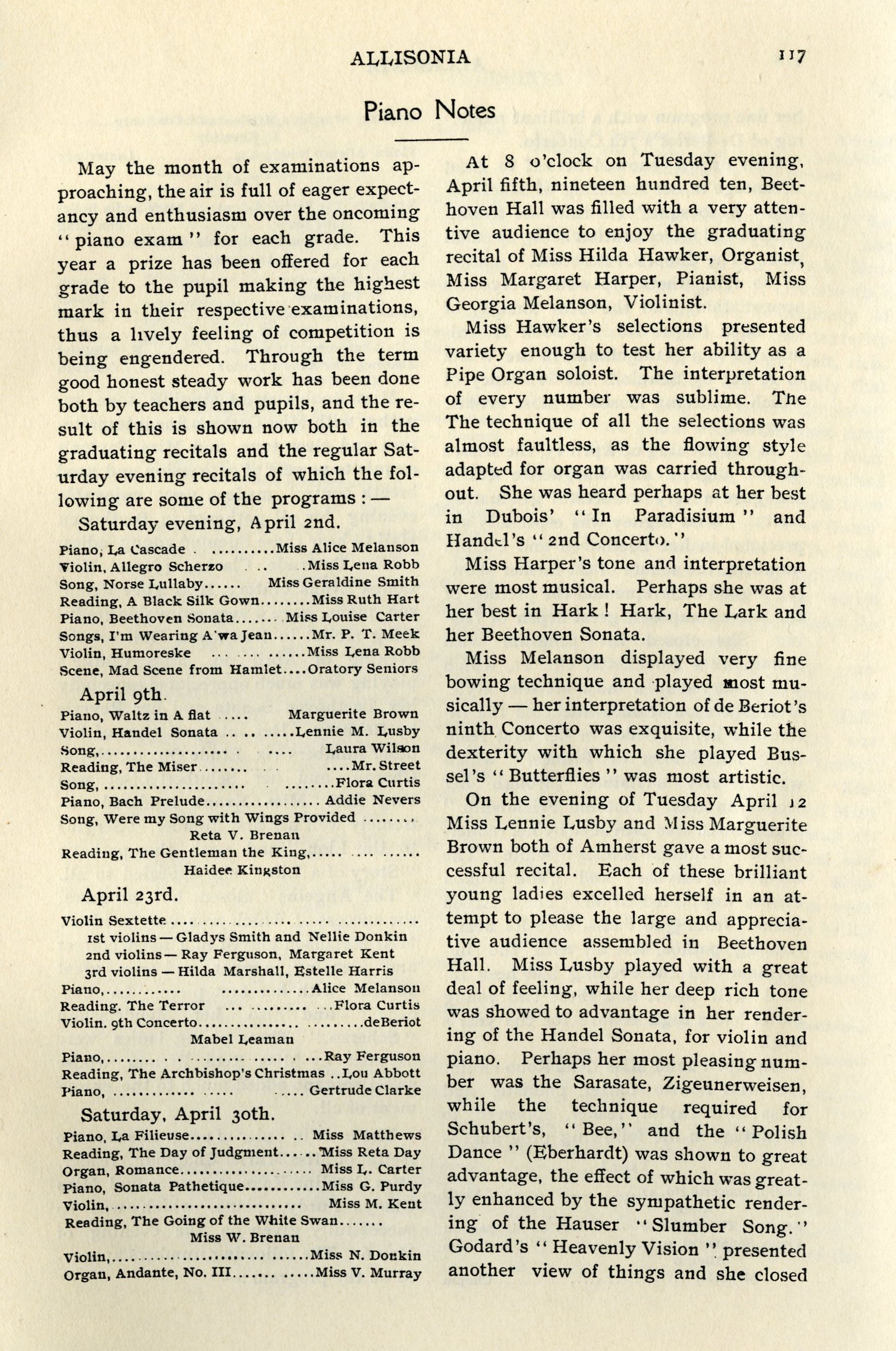 Programme for the graduating piano recitals, May 1910

Both Alice Melanson and Georgina "Georgie" Melanson are listed in the "Piano Notes." 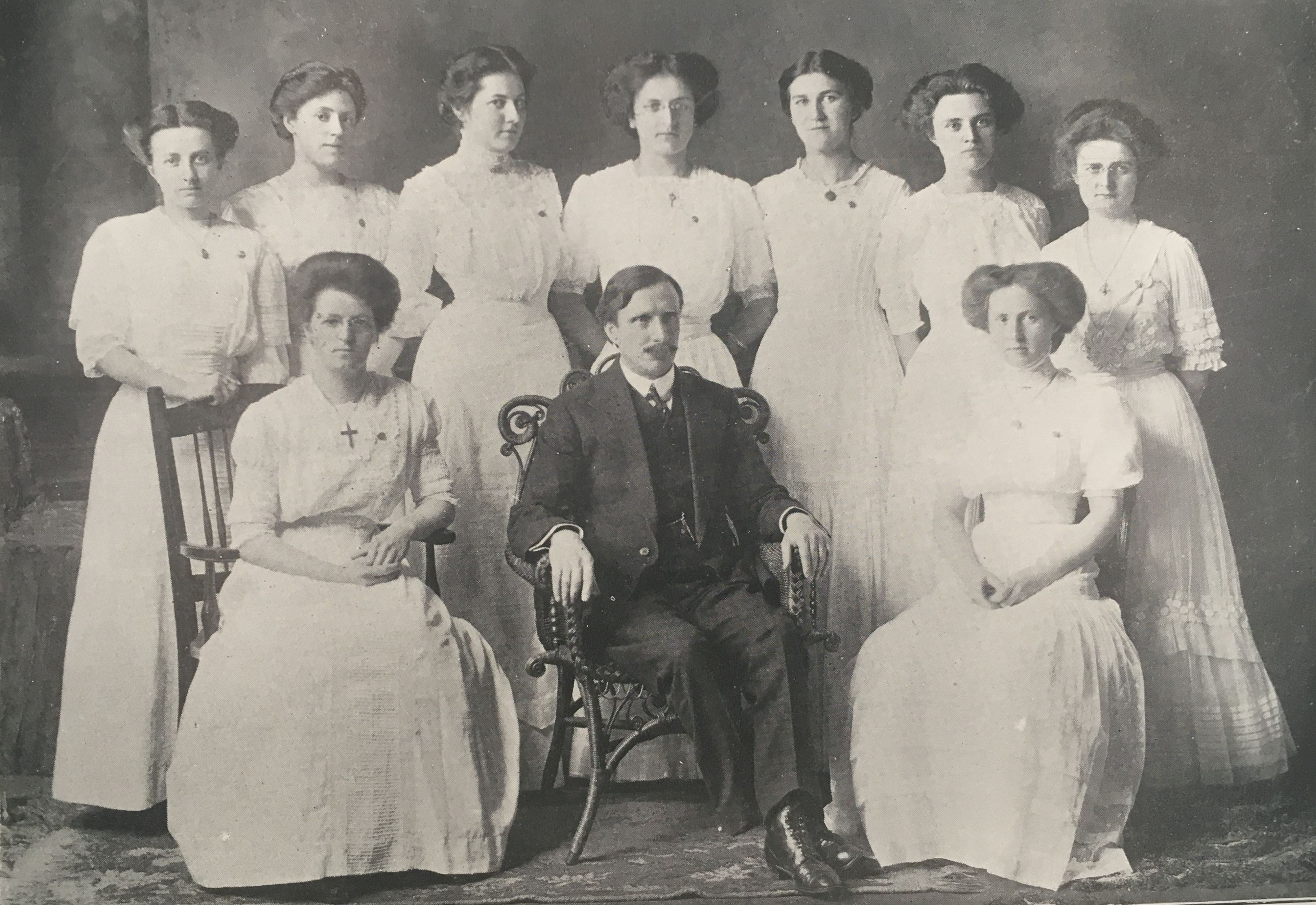 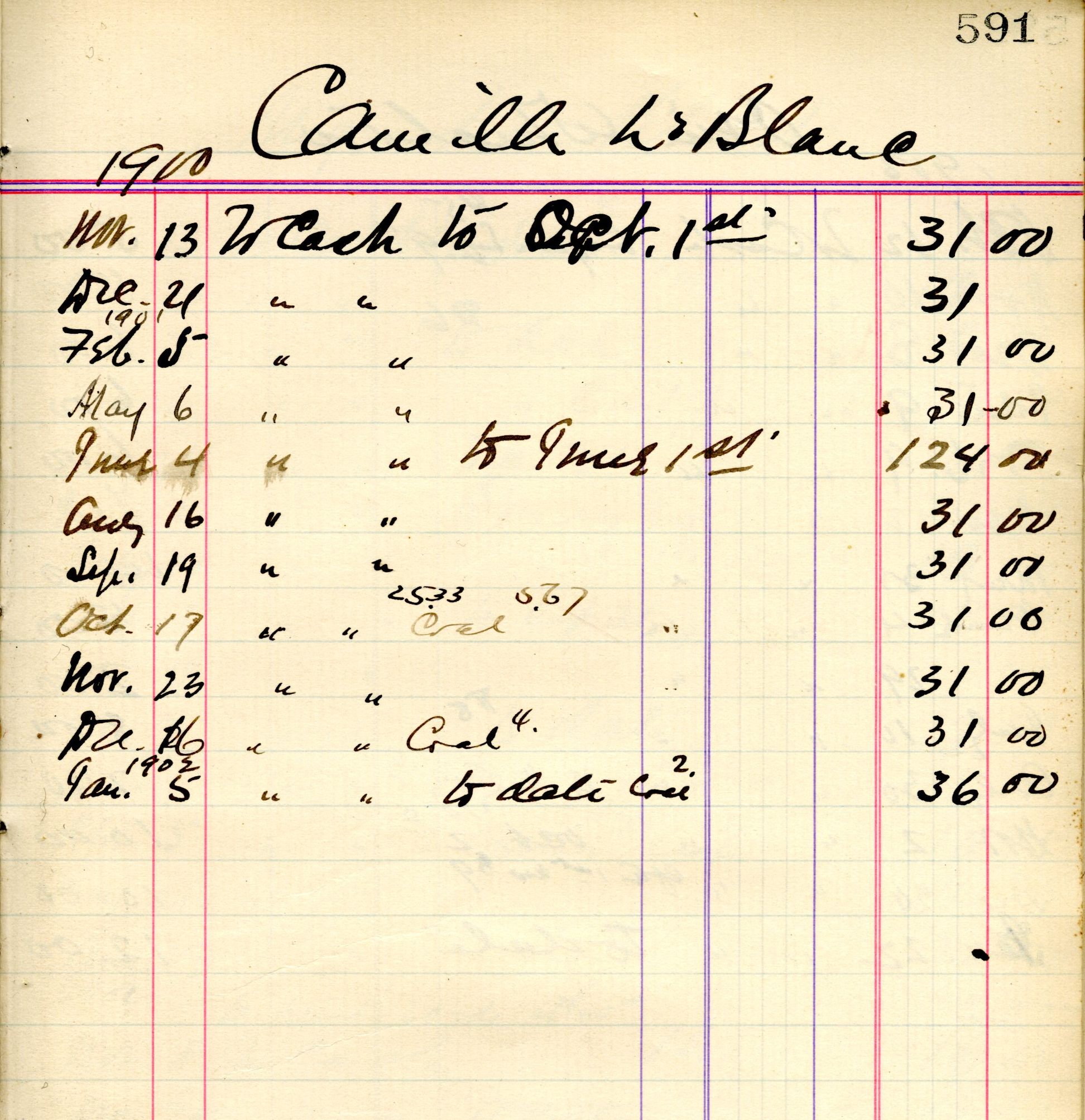 The Ladies' College account book records names of the students as well as their expenses while in attendance. A number of Acadian names appear in the account book dated 1900-1908, including LeBlanc, Bourque, Belliveau, Landry, Richard, Cormier, and Legere. Page 591 records accounting information for Camille LeBlanc.

While students of Acadian descent had been in attendance at all of the Mount Allison institutions since the turn of the century, the first Acadian to receive a degree from Mount Allison University was in 1932, when Aurore Bourque earned a Bachelor of Arts with Honours in French. The number of Acadian graduates rose steadily thereafter. The following list provides information on the first Acadians to receive degrees from each discipline, dating from 1932 to 1958.

Aurore Eugenie Bourque was born on 26 October 1908 in Leger’s Corner, Westmorland County, New Brunswick. She was the daughter of Joseph Vital E. Bourque (1876-1952) and Théosene Saulnier (1879-1975). She graduated from Aberdeen High School in 1928 and attended the Mount Allison Maritime Summer School in 1929, earning a Bachelor of Arts with an Honours certificate in French from the university in 1932. While in attendance, she was Vice-President and secretary of the French Club (Le Cercle Francais). She subsequently acquired a teaching appointment at Moncton High School and taught there from 1940 until retirement in 1968. She was an avid traveler and a benefactor of the Canadian Federation of University Women. In May 1943, the Mount Allison Record reported that Aurore had returned home from teaching in British Columbia, and had recently delivered a talk to the University Women’s Club on her trip to Mexico. She died in Shediac, New Brunswick on 15 July 2002 and is buried the St. Anselme Parish Cemetery in Dieppe, New Brunswick. The Aurore E. Bourque Bursary was established in her name at Mount Allison University.

Aurore’s sister, Violette Bourque (Surrette) (1903-bef. 2002) attended the Maritime Summer School in 1926 and was admitted into the University as a Special Student for the 1926-27 academic year. She studied under the tutelage of Prof. J. Noel Brunton at the Conservatory and later taught piano in Moncton. Violette was born on 6 November 1903 in Leger’s Corner, Westmorland County, New Brunswick. She married Henri Surette, a pharmacist, in Leger’s Corner on 30 April 1933.

Agatha Marguerite Melanson was born on 23 April 1921 in Digby, Digby County, Nova Scotia. She was the daughter of Dominique Paul Melanson (1896-1997) and Alma M. Robichaud (1900-1999). She entered Mount Allison University in the fall of 1945 after serving in the Royal Canadian Air Force for the duration of the Second World War. Prior to attending Mount Allison, Agatha attended the Digby Academy and the Provincial Normal College in Nova Scotia. She graduated with a Bachelor of Science in Physics in 1948. She married William “Bill” Donald Stretton (1920-1992) in Ottawa, Ontario in 1950. The couple had two children: Art and George. Agatha pursued a career in education, teaching for several years at Nepean High School in Nepean, Ontario. In her retirement, she travelled widely to all five continents. She died on 9 July 2012 in Ottawa, Ontario.

Christophe Gabriel Chiasson was born in 1923 in Lameque, Gloucester County, New Brunswick. He was the son of Jean-Paul Chiasson (1884-1978) and Bernadette Haché (1889-1970). He attended the Mount Allison Maritime Summer School in 1945 and entered Mount Allison University in the fall of 1946, earning a Bachelor of Music in 1949. While in attendance he was part of the Dance Band Club (1948). After graduation, he joined the staff of the Mount Allison Music department as an instructor of piano, where he taught from 1949 to 1951. During that time, he also served as Director of the Symphony Orchestra. Gabriel subsequently pursued a career in education and went on to teach music in the public school system for 30 years. He married fellow music student Anne May Murphy (1925-2017) (1947 Licentiate of Music) in 1950. The couple had six children: Monique, Christophe, Elaine, Annette, Paul, and Alec. He died on 1 January 2012 in Summerside, Prince Edward Island. He is buried in Floral Hills Memorial Gardens in Pleasant Valley, Prince Edward Island.

Anthony Leonard Legere was born on 16 November 1913 in Memramcook, Westmorland County, New Brunswick. He was the son of Hyppolite Légère (1867-1938) and Rosalie Richard (1875-1968). He entered Mount Allison University in the fall of 1947, graduating with a Bachelor of Arts in modern foreign languages in 1950 and a Bachelor of Education in 1962. While in attendance, he was secretary (1948-49) and subsequently president (1949-50) of the French Club and taught French at the Mount Allison Academy and Commercial College. Legere also held a degree from the Nova Scotia Teachers College (1933) and taught in several schools around the Maritimes before joining the staff of the Amherst Regional High School in 1942, where he taught until his retirement in 1972, besides the 3 years that he spent serving in the Royal Canadian Air Force from 1942 to 1945. He married Eva Grace McManaman (1920-2006) in 1940. The couple had four children: Marilyn, Leonard, Paul, and David. He died on 24 April 1994 in Amherst, Nova Scotia. He is buried in the Saint Charles-Nativity Roman Catholic Cemetary in Amherst, Nova Scotia.

Julie Anne Richard was born circa 1932 in Sackville, Westmorland County, New Brunswick. She was the daughter of Ernest René Richard (1889-1957) and Grace Mildred Murray (1894-1973). She entered Mount Allison University in the fall of 1949 and completed her Bachelor of Arts in Secretarial Studies with Honors in French in 1952. While in attendance she was a member of the International Relations Club, the International Student Service, and the French Club, and was secretary of the Social Sciences’ Society. She married George Jerzy Szablowski, a fellow student from Warsaw, Poland in Saint John, New Brunswick in 1952. They subsequently undertook graduate studies at McGill University, where Richard earned her Masters of Arts in French in 1958. She pursued a career in the visual arts, studying at the Montreal Museum of Fine Arts School of Art, the Central School of Art and Design in London, England, and with English-Canadian painter and member of the Group of Seven, Arthur Lismer.

Natalie Leblanc was born in 1933 in Quebec and grew up in Atholville, Restigouche County, New Brunswick. She was the daughter of François LeBlanc and Jeanette Degas. She entered Mount Allison University in the fall of 1955 and earned her Certificate in Fine Arts in 1958. While in attendance, she was an active member of the Women’s House Council (1955) and the Women’s Athletic Committee (1958). Her participation on the Co-Ed Field Hockey team earned her a Felt Award during her final year. She married fellow art student Tom Forrestall in 1958, and the couple had six children: William, Monica, Renée, Jack, Curphey, and Francis. They lived in Fredericton, New Brunswick, where Natalie received a B.Ed. from the University of New Brunswick in 1962, and subsequently moved the family to Darmouth, Nova Scotia. She worked as an art educator and managed the Forrestall Fine Art business for a number of years. She was a passionate Acadian and a devout Catholic. She died on 13 March 2006 in Dartmouth, Nova Scotia.

The Natalie LeBlanc Forrestall Fine Arts Bursary was established in her name at Mount Allison University.